Kuldeep Yadav literally turned the tie against Pakistan in favour of India at Old Trafford, Manchester when he removed Babar Azam in one of the moments of the ICC Cricket World Cup 2019 so far 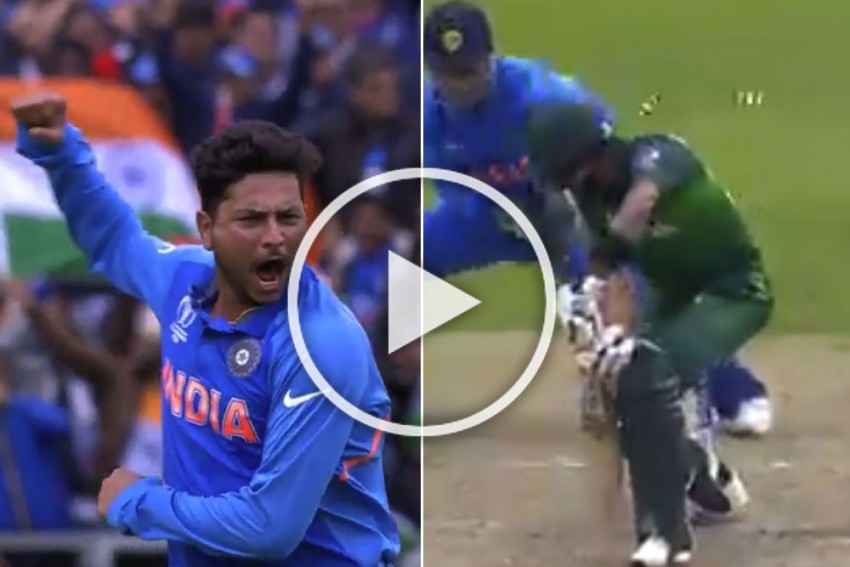 In front of a packed and tense Old Trafford crowd, Kuldeep Yadav enticed Babar Azam forward before the ball dipped late, turned between bat and pad from off to leg and crashed into the stumps.
Screengrab: ICC
Outlook Web Bureau June 17, 2019 00:00 IST IND Vs PAK, ICC Cricket World Cup 2019: Kuldeep Yadav Makes His Mark With ‘A Perfect Delivery' Against Pakistan – WATCH 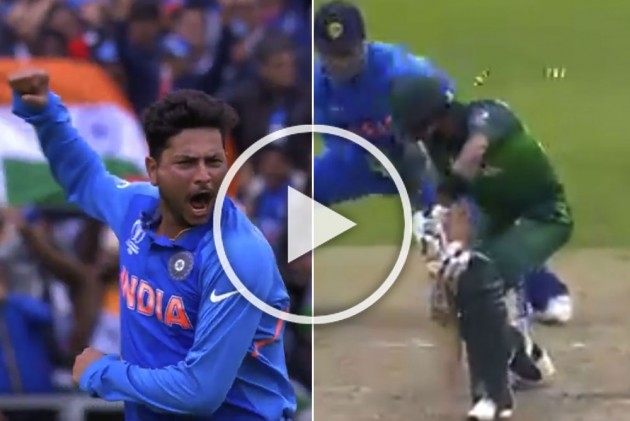 If he hadn't done so already, Kuldeep Yadav announced himself upon the ICC Cricket World Cup 2019 with a delivery he described as perfect, that too against arch-rivals Pakistan.

The 24-year-old literally turned the tie against Pakistan in favour of India at Old Trafford, Manchester when he removed Babar Azam in one of the moments of the tournament so far.

In front of a packed and tense Old Trafford crowd, Kuldeep enticed Babar forward before the ball dipped late, turned between bat and pad from off to leg and crashed into the stumps.

Kuldeep Yadav's dismissal of Babar Azam yesterday was one of the balls of #CWC19 so far.

He talked through that game-changing moment with our Insider @PathakRidhima. pic.twitter.com/0k1B17Jedr

His Sunday best ended a threatening stand of 104 between Babar and Fakhar Zaman, and with Fakhar top-edging Kuldeep in his next over, India were on course for a win under the DLS method.

Along with New Zealand, they remain unbeaten and will look to stretch that run to five games when they face Afghanistan at the Hampshire Bowl on Saturday.

Kuldeep revealed that he was so pleased with the Babar ball that he watched it during the rain break that temporarily halted the latest victory charge.

“It drifted and turned so any spinner would love that delivery,” he said. “It was a proper delivery, a Test delivery, deceiving the batsman in the air and forcing him to make a mistake – a perfect delivery.

“I think it was one of the best balls of the tournament for me. Babar Azam, he is a good player of spin and from a team point of view a really good wicket. They were striking the ball very well and rotating the strike. After Fakar got out too, it put them under pressure.”

Kuldeep is one of the most eye-catching bowlers in the tournament with relatively few left-arm wrist-spinners operating at the highest level.

No doubt the surprise factor has contributed to a wonderful record of 90 wickets from 47 games at a beguiling average of 22.50 apiece.

But the killer stat is his strike rate of a wicket every 27.40 balls, the best of any India bowler in their 45 years of ODI cricket to have sent down a minimum of 1,000 deliveries.

Of those in the current World Cup, only Mitchell Starc (Australia) and Rashid Khan (Afghanistan) boast lower strike rates, a reflection of Kuldeep’s aggressive approach to slow bowling.

He said: “I bowled really well in the first game [versus South Africa], against Australia as well, and they were struggling to hit me.

“That is important for all spinners, when you have the rhythm. Against Pakistan too with the rotation of the ball and deceiving the batsman in the air, that is the most important thing for any spinner. That is my strength and I really love it.”

Previous experience in England includes a five-wicket haul against the host nation in a T20I last July – which also happened to be at Old Trafford.

“I knew the conditions were favourable for the spinners,” Kuldeep said. “I was getting a little bit of turn even in the first over. I only look for that when I get such a pitch, I really try to spin the ball.”