Livingstone is unlikely to play in England's second warm-up game vs New Zealand on Wednesday. He is also in doubt for their ICC Men's T20 World Cup opener vs West Indies. 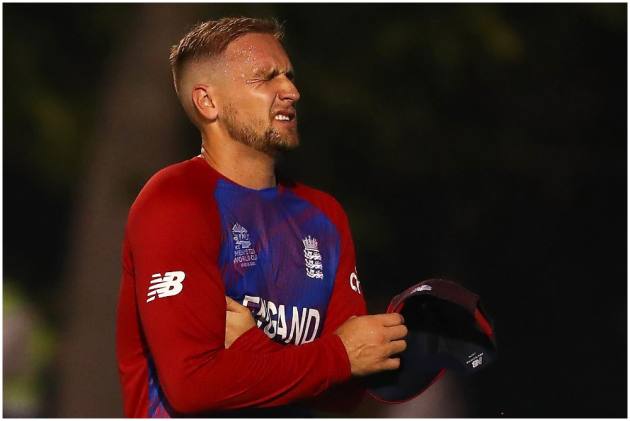 England may miss the services of Liam Livingstone in its opening fixture against West Indies in the ICC Men’s T20 World Cup on Saturday after the hard-hitting batter suffered a finger injury during their first warm-up match versus India in Dubai.

Livingstone injured his finger while dropping an Ishan Kishan catch at deep mid-wicket as England lost to India by seven wickets with an over to spare. The incident happened after Kishan pulled England pacer Chris Jordan onto the leg side as the ball went high up in the air.

Livingstone went for the catch and looked like losing the ball in the lights and immediately was in pain. A swelling on his little finger of the left hand was clearly visible. The lights at the ICC Academy were not as bright as in most of the international matches.

Livingstone left the field alongside England’s team physio, with Sam Billings replacing him in the field. He took no further part in the match. According to an England spokesperson, ‘the injury would be assessed in (the) next 24 hours’ once the swelling goes down.

He also looks unlikely to play against New Zealand in their second warm-up match on Wednesday in Abu Dhabi. Meanwhile, England all-rounder Moeen Ali played down Livingstone’s injury and said he will be fine soon. “I think he’s alright,” Ali said. “I think it’s just bruising on the back of the hand but I think he’ll be fine.

“Obviously it was a bit of a scare at the time but he said it was fine, so hopefully he’s all good. He’s a brilliant player – he’s been playing really well over the last couple of years. Hopefully, he can carry that form into the World Cup and I feel like it's going be a big stage for him.”

Earlier, batting first England posted a mammoth 188/5 against India, thanks to Moeen Ali’s 43 not out off 20 balls towards the end. Livingstone had earlier hit 30 off 20 balls including four fours and a straight six while Jonny Bairstow contributed with 49.

Livingstone took the priced scalp of India captain Virat Kohli in his two overs giving away just 10 runs. Regular skipper Eoin Morgan was rested on the day. Chasing 189, India went off to a flying start with openers KL Rahul (51) and Ishan Kishan (70) hitting brilliant half-centuries. An unbeaten 14-ball 29 from Rishabh Pant sealed the deal for India.