Sports Hungary Vs France, Live Streaming: When And Where To Watch UEFA Euro 2020, Group F Match

Hungary Vs France, Live Streaming: When And Where To Watch UEFA Euro 2020, Group F Match 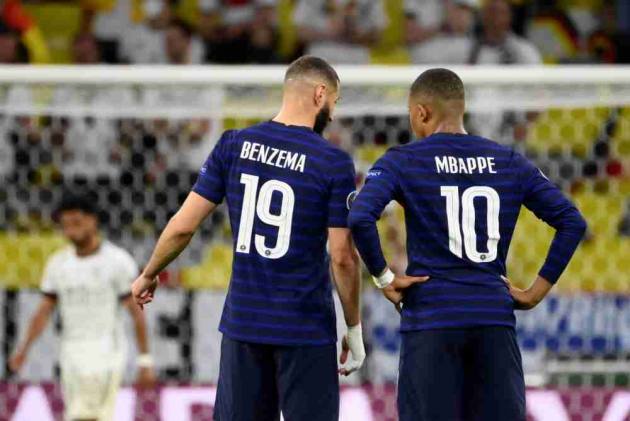 Karim Benzema's return speeds up France's attack and has taken some pressure off the defense.

The French team will be going for a fourth consecutive clean sheet with Benzema playing when it faces Hungary in Budapest on Saturday at the European Championship. A win will put France into the next round after it opened with a 1-0 victory over Germany. Hungary lost to Portugal 3-0.

Les Bleus look sharper with Benzema, who has slotted in effortlessly since returning to the national team  after nearly six years out following a fallout with coach Didier Deschamps amid a sex tape scandal.

He has replaced Olivier Giroud, who plays more with his back to goal. Benzema's technique and reading of the game help him click with Kylian Mbappe and Antoine Griezmann. The trio are working for and with each other, forming a marauding front unit that stops opposing teams from passing out quickly from the back.

Their efforts take strain off the midfield and, ultimately, the defense.

"Then, we encourage them from the back, or give them good passes to attack with."

Varane, a Real Madrid player who occupies central defense alongside Presnel Kimpembe, said the work rate of the forwards was vital in nullifying Germany's much-vaunted attack.

"They ran a lot to reduce the space between the lines."

Considering they've played only three games, they have gelled remarkably fast as an attacking unit. Benzema and Mbappe swap quick passes and switch positions higher up the field, with the quick-thinking and skillful Griezmann operating behind them.

Pogba seems back to his best after losing his place in the Manchester United team and being stripped of the vice captain's role in late 2018.

While Benzema has yet to score since coming back, he has been a constant threat and had a sharp finish ruled offside on Tuesday.

Mbappe, Pogba and Griezmann all scored in the World Cup final victory over Croatia three years ago. Now Deschamps can add in Benzema, who netted 30 goals for Real Madrid this season.

Benzema's ability to control the ball in any position and his deft passing at speed have helped France keep possession high up the field, reducing the threat of rapid counterattacks.

There's been an improved attitude from Mbappe, too, in terms of defending much more off the ball than he did in previous games for France, and for Paris Saint-Germain.

The dangerous runs of all three forwards give Pogba considerable options. The way the attacking three linked up with him troubled Germany throughout.

The four players appear inseparable on and off the field. The French team posted a video of the quartet arriving at training on Wednesday.

Griezmann held a phone up to Pogba and showed him something, which prompted a bellowing laugh from the Manchester United midfielder. Benzema and Mbappe laughed along with him.

Hungary coach Marco Rossi lamented how easily his team conceded goals after Portugal took a late lead in Budapest. They will need to tighten up against France and press in all areas of the field to stop their opponents from getting a grip on the game.

Hungary, however, will have huge backing at the 67,215-capacity Puskas Arena,  just like against Portugal.

Hungary is the only one of the 10 countries hosting matches at the tournament to allow full crowds amid the pandemic. (AP)

Head-to-Head: France have a poor record against Hungary. France has won just eight times in 23 matches, while Hungary has 12 wins. Saturday’s game will see France start as favourites