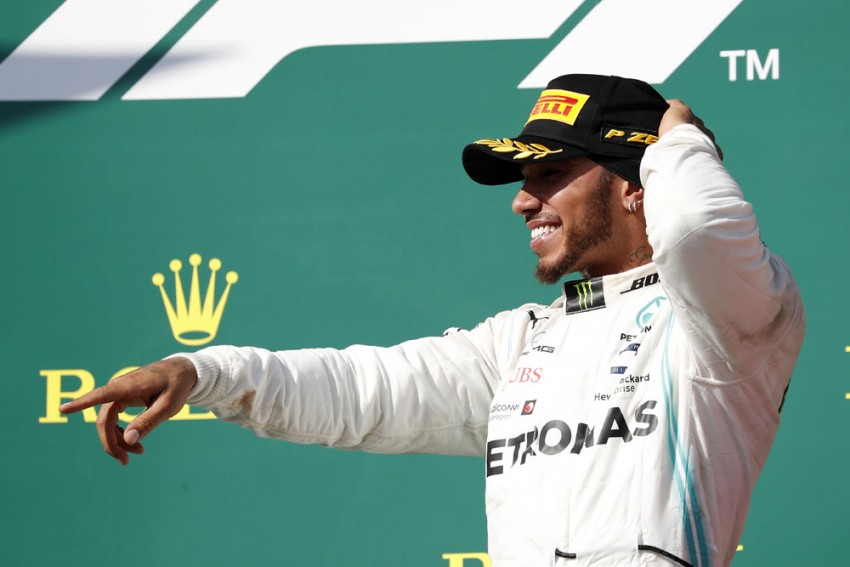 Lewis Hamilton benefited from a late strategic gamble by Mercedes as he pipped Max Verstappen to glory at the Hungarian Grand Prix on Sunday.

Verstappen looked set to record consecutive race wins for the first time in his career after claiming his maiden pole position in Budapest, but Hamilton's switch to a two-stop race denied him.

After failing to make an overtake attempt stick on lap 39, the reigning champion returned to the medium compound for his final stint and it paid off.

Hamilton finally got past Verstappen, who had complained his hard-compound tyres were "dead", at turn one with four laps remaining to snatch an eighth win of the season in a thrilling finale, while Sebastian Vettel beat Ferrari team-mate Charles Leclerc to third.

Max Verstappen started on pole but finishes in P2

Verstappen got away well but soon had Hamilton on his tail after Valtteri Bottas locked up in the first two corners and took damage to his front wing as he was overtaken by his Mercedes team-mate and Leclerc.

Bottas pitted for a replacement and was told when he emerged at the back of the field that sixth place was a realistic prospect, but he could only recover to finish eighth.

Hamilton closed to within a second of Verstappen but the Red Bull driver stopped for hard tyres and did enough to stop the reigning champion, who was kept out for five more laps to try to increase the gap, retaining first place after pitting.

The Briton was flying on fresh rubber and made his move on Verstappen on the run down to turn four on lap 39, but he went off track and expressed his exasperation in the aftermath.

"What more can I do? I can't keep the pressure on," Hamilton said over team radio as he eased off to let his tyres cool.

Hamilton was called in for a set of the medium compound and set a new lap record as he cranked up the pressure on Verstappen, whose deteriorating hard tyres made it impossible to deny the five-time champion.

Hamilton questioned his team's decision to pit him for a second time, saying over team radio: "I don't know if that's the right call, man."

However, he got his head down and immediately set about making up ground on Verstappen, who was disappointed Red Bull did not make the same move.

It ended up paying dividends, with Hamilton claiming a seventh win in Hungary and extending his lead in the drivers' standings to 62 points.

Verstappen pitted for fresh tyres after being passed and earned the bonus point for the fastest lap as a consolation.

FERRARI NOT AT THE RACES

While Hamilton and Verstappen were involved in a gripping tussle, Ferrari were nowhere to be seen.

The Scuderia had struggled with cornering at the Hungaroring all weekend and Vettel and Leclerc were left to battle it out for third.

Four-time champion Vettel overtook his team-mate at the opening turn with two laps remaining to ensure it was him spraying the champagne, though the way they have fallen behind Red Bull will be a concern.

He took a new power unit after failing to get out of Q1 on Saturday and started from the back of the grid.

After working his way up into the top 10, he ended up having to settle for 14th.

It is time for the mid-season break, with the drivers returning to action for the iconic Belgian Grand Prix at Spa in four weeks.