Vijender Singh, a bronze medallist at the 2008 Beijing Olympic Games and who had turned professional in 2015, entered the bout with a 12-0 record 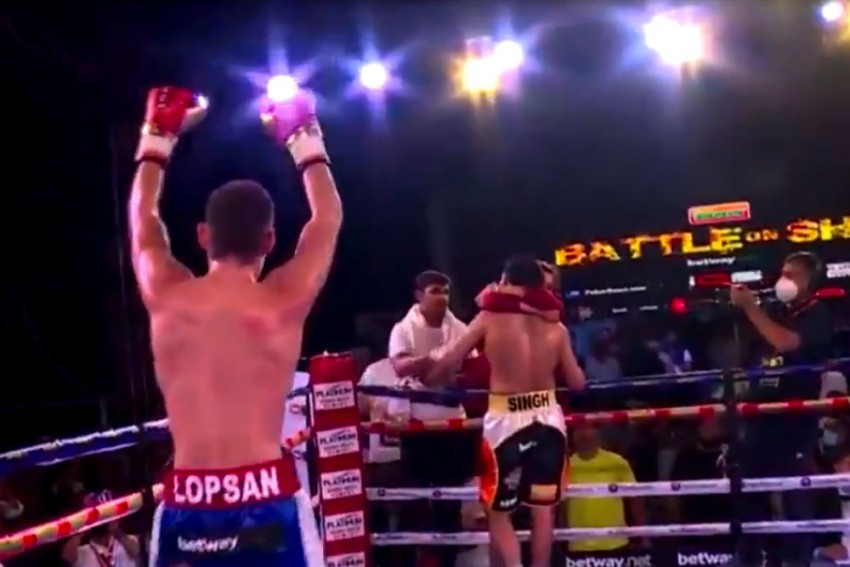 The unbeaten run of star Indian boxer Vijender Singh in the professional circuit ended on Friday night after he was defeated by his Russian opponent Artysh Lopsan in the 'Battle on Ship' in Panaji, Goa. (More Sports News)

Vijender, a bronze medallist at the 2008 Beijing Olympic Games and who had turned professional in 2015, entered the bout with a 12-0 record.

Upset in the main event in Bardez, India! Russian Super middleweight Artysh Lopsan (5-1-1, 3 KO's) beat up and knocked out Vijender Singh (12-1) scoring multiple knockdowns along the way before Singh retired during the 5th round pic.twitter.com/gj4RGMl1RF

In the opening round, Vijender was cautious in his approach as the Russian outplayed the Haryana boxer and used his height to perfection.

The Russian, who was fighting his seventh bout, out-punched Vijender on the rooftop of the 'Majestic Pride Casino' ship on the waters of the Mandovi River, which resulted in a heart-break for the partisan crowd.

The referee, after one minute and nine seconds in the fifth round, declared the Russian as the winner as the eight-round game ended in a knockout.

In the second round, the 26-year-old Lopsan gave an exhibition of his class during and matched Vijender's oodles of experience. He had better exchanges and made optimum use of his punches -- hooks and straight punches -- and tired the Haryana boxer.

The Indian continued to face stiff competition as the 6 feet four inches tall Russian managed to squeeze every ounce of his opponent's energy.

Vijender was visibly troubled and also looked tired in the next two rounds as he was continuously punched by the Russian, who was a tad better on the given day.

In the co-main event, seasoned campaigner and pugilist Neeraj Goyat defeated his rival Sandeep Kumar in the welterweight division by a knockout.

Dharmendra Grewal was declared as the unanimous winner against Ashish Ahalawat in the cruiserweight category.