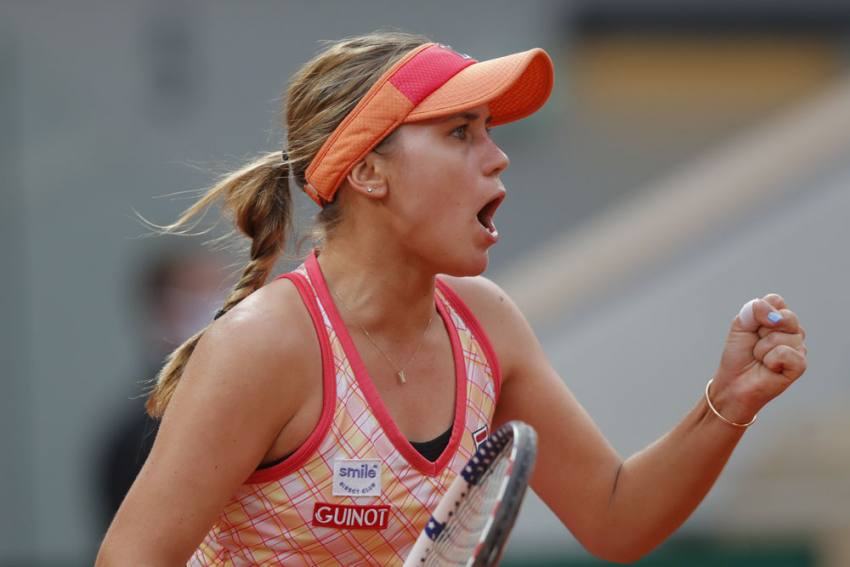 Sofia Kenin of the U.S. clenches her fist after scoring a point against Petra Kvitova of the Czech Republic in the semifinal match of the French Open
AP Photo/Michel Euler
Omnisport 2020-10-09T00:05:11+05:30 French Open 2020: Magnificent Sofia Kenin Topples Petra Kvitova To Reach Final 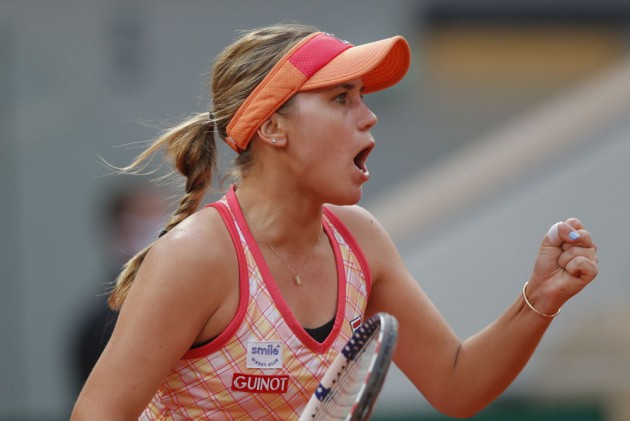 Kvitova had not dropped a set in five matches at Roland Garros, but a composed Kenin shattered the seventh seed's hopes of ending a six-year grand slam drought with a hugely impressive 6-4 7-5 win.

Kenin, 21, gave an incredible exhibition of athleticism, skill and steely determination to set up a showdown with unseeded Polish teenager Swiatek in Paris on Saturday.

The Australian Open champion saved 10 break points and Kvitova paid the price for making 31 unforced errors on a windy Court Philippe-Chatrier as the American stayed in the hunt for a second major title of the year.

See ya soon, Iga @SofiaKenin passes the Kvitova test 6-4 7-5 to reach a first #RolandGarros final and improve to 16-1 in Grand Slams this season.#RolandGarrospic.twitter.com/MjHYqz2YYs

Sprightly fourth seed Kenin took the upper hand when she broke in the third game, Kvitova looping a forehand beyond the baseline at full stretch and she led 4-1 as the left-hander's errors mounted.

Two-time Wimbledon champion Kvitova broke for the first time in the next game, but Kenin got herself out of a hole to hold for a 5-3 lead after saving a break point.

The Moscow-born youngster, whose backhand was a potent weapon, served out the set from 0-30 down with assistance from more wayward Kvitova groundstrokes and incredible defence.

A resolute Kenin hung in there to level at 2-2 in the second set, fizzing a sublime cross-court winner under pressure, after fending off another break point.

Kenin broke in the next game after showing her range of strokes, including an exquisite drop shot return, and strength of mind, which was required in abundance again when she saved another four break points in a marathon game prior to going 4-2 up.

A nervy Kenin was broken when she had a first opportunity to serve out the match but secured her place in a second grand slam final after Kvitova failed to hold.

A relentless Kenin's gameplan worked almost to perfection, returning superbly and taking a more measured approach that worked a treat as Kvitova tried to power her way into a first French Open final.

There were 12 unforced errors from the racket of Kvitova in the opening set and another 19 in the second. Kenin showed great clarity of thought and mixed up her approach superbly, demonstrating great anticipation and speed around the court as her Czech opponent had a bad day at the office in testing conditions.