During India's Intercontinental Cup match against North Korea on July 13, fans expressed their unhappiness at the All India Football Federation kowtowing to its commercial partners, Football Sports Development Limited.

The All India Football Federation's controversial plans to downgrade the I-League championship and elevate the Indian Super League as the premier tournament of the country has met with some vociferous resistance from the Blue Pilgrims, the fan group that is 'officially' recognised as the equivalent of England's cricket fans, the Barmy Army or India's Bharat Army.

During the Intercontinental Cup match against North Korea in Ahmedabad on July 13, the Blue Pilgrims held massive banners saying 'Football Doesn't Matter, Money Does'. This was in protest against the AIFF's plan to give the ISL, a product promoted by the Football Sports Development Limited, a premier position ahead of the popular I-League, played by the 10 top regional clubs of India. After officials asked the fans to not carry such banners, they wore shirts which protested against the latest developments in Indian football.

FSDL is an arm of Reliance, the commercial partners of AIFF. The national federation gets about Rs 50 crore annually from FSDL. Although the AIFF claims it is the 'sole custodian of the game in India', FSDL virtually controls the sport (read top AIFF officials).

Unable to form a unified league in two years, last week, AIFF president Praful Patel said it was offering ISL clubs a slot in the AFC Champions League -- Asia's biggest club championship like the Champions League in Europe. Until last year, I-League teams vied to play in the Champions League while ISL teams played to qualify for the relatively less prestigious AFC Cup.

"We felt AIFF is unfair towards the I-League clubs, who deserve it (Champions League slot) and have worked a lot for Indian football," a Blue Pilgrim fan told Outlook on Tuesday.

“In a gentle way, you can shake the world.” - Gandhi

But Sir,
THIS IS OUR GAME. NOT YOURS.

At least six I-League sides, including legacy teams like East Bengal, Mohun Bagan, Churchill Brothers (Goa) and more recent teams like Minerva Punjab are protesting Patel's move to kowtow to the FSDL. They have even threatened to go to court. A hassled AIFF has sought help from the Asian confederation which also wants a unified league.

Blue Pilgrim supporters were scathing in their protest, even some fans calling officials running Indian football as "chors" (thieves).

Was it @BluePilgrims alone who protested yesterday against the ongoing nuisance of AIFF & FSDL?
What about these fans who screamed "Gali Gali mein shor hain, FSDL CHOR HAI"(Every street corner is screaming that FSDL is a THIEF)@THE_RanjitBajaj @MohunBagan @Akarsh_Official @fni pic.twitter.com/jbb8EwxwOp

Football officials had asked Blue Pilgrim members not to bring banners to the stadium during tonight's match against Syria at the EKA Arena in Ahmedabad. Therefore, in India's ongoing clash with Syria in Ahmedabad, the fans wore anti-FSDL shirts, which stated, "GREED > FOOTBALL". 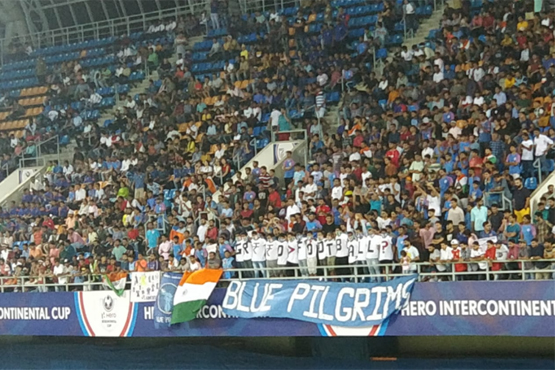 The fans protest against the latest developments in Indian football.

AIFF contends that it is only honoring an agreement with Reliance signed in 2010. But fans question how can a "closed" -- where there is no promotion or relegation -- league like the ISL becoming a premier competition. More importantly, there is clear conflict of interest as ISL is promoted by FSDL.

Patel has offered a "status quo". It means both I-League and ISL will run parallel to each other for another three years till a solution is found. Patel, now a top FIFA official, quits Indian football after 18 months.

In a climate of mistrust and deceit, the national team's results in the Intercontinental Cup -- India are winless in two games -- under new head coach Igor Stimac of Croatia probably reflects the hopelessness in Indian football.