The Euro 2020 game between Denmark and Finland was suspended for about 90 minutes after Christian Eriksen's collapse. It eventually resumed and Finland won 1-0 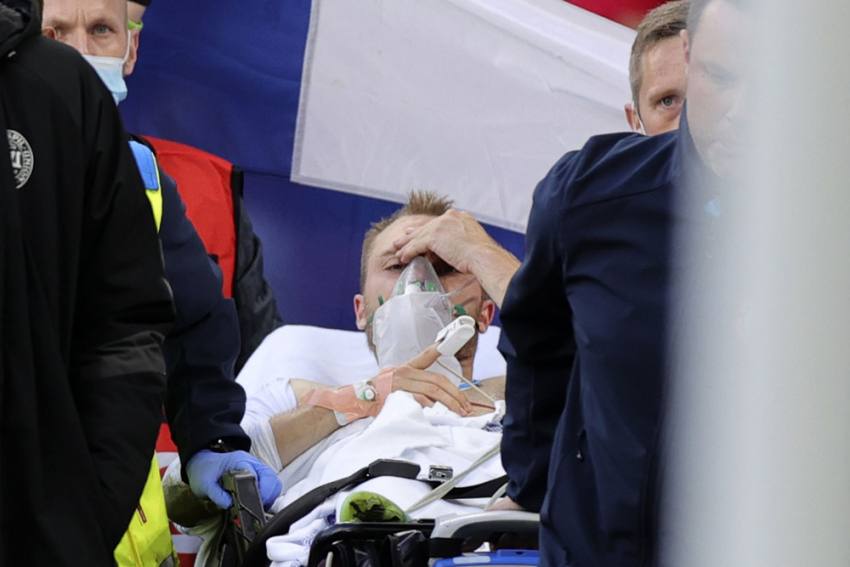 Paramedics use a stretcher to take out of the pitch Denmark's Christian Eriksen after he collapsed during a Euro 2020 match at Parken stadium in Copenhagen on June 12, 2021.
Friedemann Vogel/Pool via AP
Agencies 2021-06-13T16:39:34+05:30 Euro 2020: Christian Eriksen Sends 'His Greetings' To Denmark Teammates After Collapse 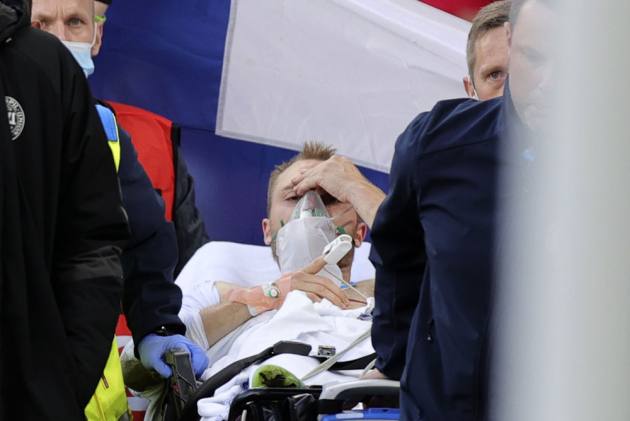 Christian Eriksen remained in stable condition in a Copenhagen hospital Sunday and "sent his greetings to his teammates" as he recovers from his collapse during a European Championship game, the Danish soccer federation said.

The rest of the Danish team was being given crisis management assistance as they process the incident that happened during Saturday's game against Finland in Copenhagen. Eriksen fell face-forward to the ground late in the first half and needed CPR from medical staff before regaining consciousness.

"This morning we have spoken to Christian Eriksen, who has sent his greetings to his teammates," the Danish federation wrote on Twitter. "His condition is stable, and he continues to be hospitalized for further examination. The team and staff of the national team has received crisis assistance and will continue to be there for each other after yesterday’s incident."

The Euro 2020 game was suspended for about 90 minutes after Eriksen's collapse. It eventually resumed and Finland won 1-0.

The Danish team canceled all planned media activities at its base camp on Sunday and also postponed a training session.

The 29-year-old Eriksen was being treated at Rigshospitalet, one of Denmark's top hospitals which is less than a mile away from Parken Stadium, where the game was played.

The Danish federation, known as the DBU, also thanked fans and other teams for their outpouring of support for the Inter Milan midfielder who earned a reputation as one of the world's top playmakers during his seven years in the Premier League at Tottenham.

Denmark coach Kasper Hjulmand said after Saturday's game that the Danish players would be offered any assistance needed as they try to focus on the rest of the tournament.

"We will spend the next few days processing this as best we can,” Hjulmand said. “And of course we are surrounded by professional people. ... It's not normal to play such a game and then see one of your friends suffer with a heart issue."

The incident cast an immediate pall on what had been a party-like atmosphere in Copenhagen as Denmark hosted a major tournament game for the first time. The players had been talking about the possibility of repeating the country's upset win at the 1992 European Championship, with Eriksen the centerpiece of the team in his attacking midfield role.

Now the team will have to focus on just getting through the next game against top-ranked Belgium on Thursday in Group B. And Hjulmand praised his players for not being afraid to show their emotions both on the field and in the dressing room.

"It's a traumatic experience," Hjulmand said.

Hjulmand said he had experienced a similar situation during his career as a club coach “where we almost lost someone on the field.”

"And now I can see how everyone is reaching out to their families right now and tries FaceTiming them,” Hjulmand said during his post-game news conference. "So that’s what a situation like this does. It’s a tough night."