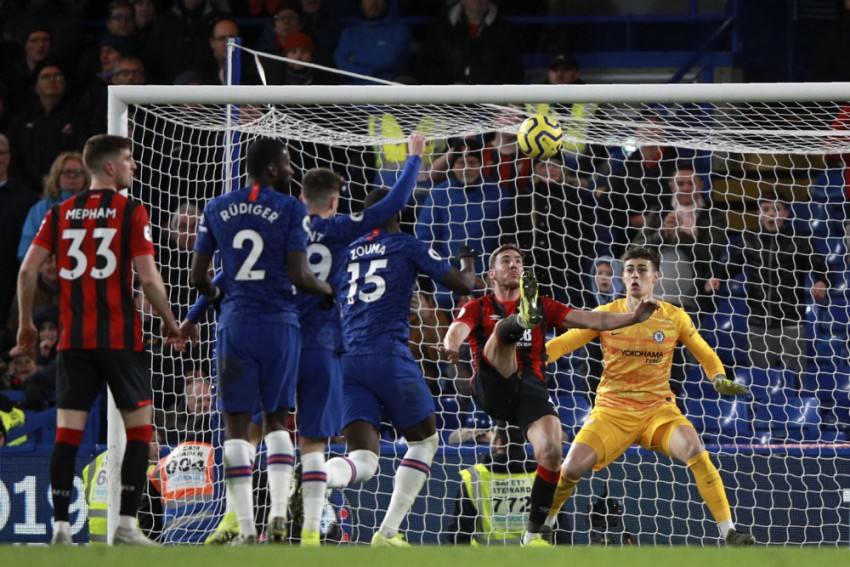 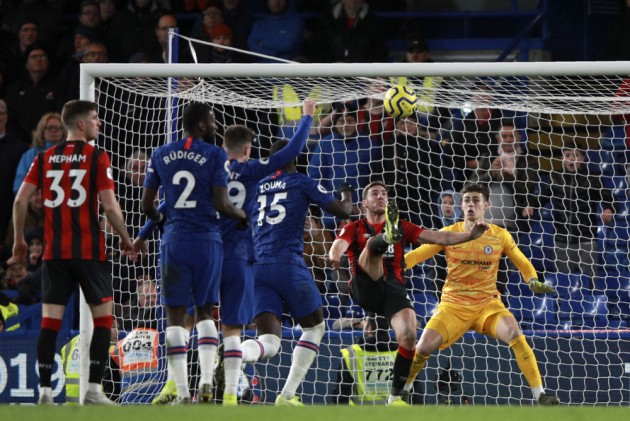 Chelsea's form in the English Premier League continued to deteriorate as they suffered a 1-0 defeat to Bournemouth at Stamford Bridge on Saturday. (More Football News)

A dire display against Eddie Howe's men shattered any Chelsea hopes that progression to the Champions League last 16 – secured by a midweek win over Lille – would rejuvenate a team who had lost three of their previous four domestic league games.

The Cherries' winner six minutes from time was initially ruled out for offside, but a VAR review showed Dan Gosling was onside before he superbly hooked over Kepa Arrizabalaga.

The Blues' gap over fifth place could be reduced to two points on Sunday if Manchester United overcome Everton or Wolves beat Tottenham. Bournemouth, for their part, celebrated bringing a halt to a run of five consecutive top-flight defeats.

Moment of the season so far?

Nearly there, come on!!!

Both sides carved out chances inside the opening 10 minutes: Ryan Fraser's low effort was kept out by Arrizabalaga at his near post and Aaron Ramsdale raced off his line to block Mason Mount's close-range strike.

Tammy Abraham then whipped wide at the end of a flowing move, but Bournemouth – who looked sharp on the break – kept the hosts comfortably at arm's length for the remainder of the first half.

Chelsea looked marginally more threatening in the early moments after the break but were struggling to call Ramsdale into action.

The Cherries goalkeeper was finally required with 20 minutes remaining when he repelled Emerson's point-blank header, although the Brazilian should not have given the 21-year-old a chance.

That save gave Howe's men the platform to seal a superb win after the breakthrough came in the 84th minute.

Jefferson Lerma's header into the penalty area was chested down by Gosling, who cleverly hooked over Arrizabalaga with his back to goal.

Cesar Azpilicueta threw himself at the ball in a desperate attempt to clear off the line and hooked it back athletically, but not before it had crossed the line by a clear foot.

Referee Graham Scott initially ruled the goal out for offside, but a VAR review showed Gosling was onside and the goal was given, sparking bedlam among Bournemouth's players and supporters.

What does it mean? Chelsea's struggles intensify, Cherries bounce back

Chelsea's bright start to the season is unravelling fast. They were bereft of inspiration against supposedly struggling opponents, rarely looking like scoring against a depleted backline. With London derbies against Tottenham and Arsenal on the horizon, Lampard will desperately hope he can inject some life into his stuttering side.

Bournemouth, meanwhile, were outstanding and good value for all three points. After five straight defeats, Howe can enjoy a more relaxed weekend than he has recently been accustomed to.

Without Steve Cook and Nathan Ake in defence, few gave Bournemouth any chance of taking anything back to the south coast. Simon Francis was superb at the back, though, marshalling a defence that restricted Lampard's side to precious few opportunities.

The England international has been in stellar form for Chelsea this season but he looked badly off the pace and rarely looked like breaking through a stoic Bournemouth backline.

Chelsea come up against former manager Jose Mourinho next weekend when they travel to Tottenham on the Sunday, while Bournemouth will hope to make it back-to-back wins when Burnley visit the Vitality Stadium a day earlier.