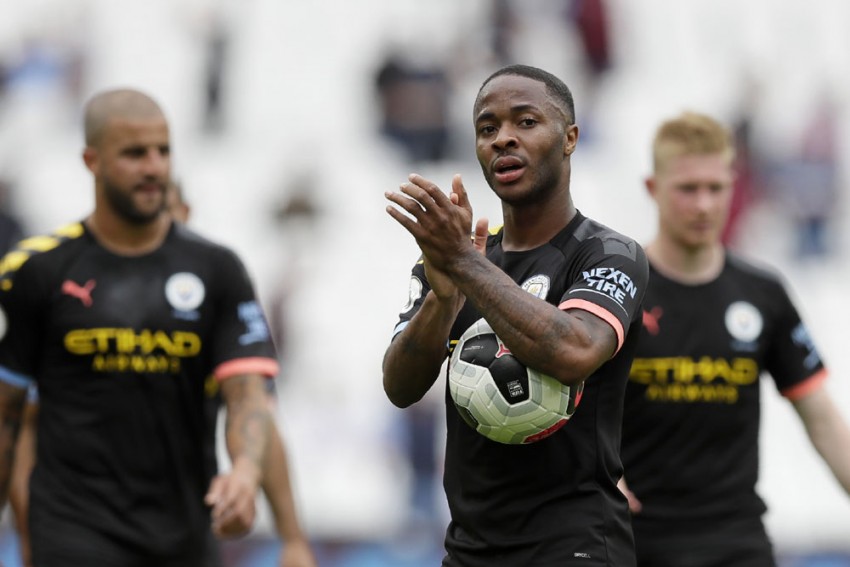 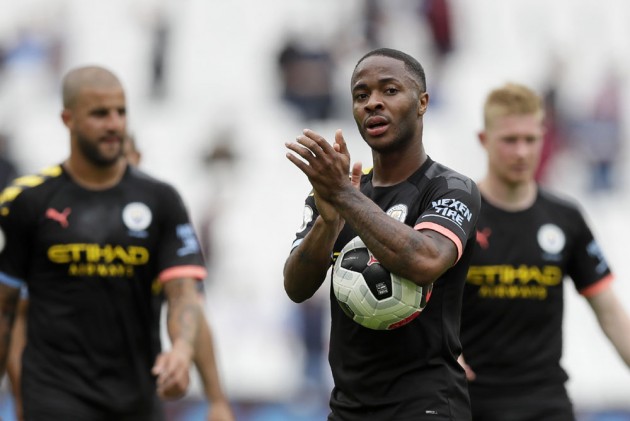 Raheem Sterling scored a hat-trick as Manchester City made a stunning start to the defence of their Premier League title by hammering West Ham 5-0.

City watched last season's runners-up Liverpool romp to a 4-1 win over Norwich City on Friday and answered with an emphatic triumph of their own.

Crystal Palace and 10-man Everton played out a goalless draw, while Sheffield United grabbed a late equaliser to claim a point at Bournemouth.

Tottenham will host Aston Villa in the last game of the day.

Sterling's treble inspired a five-goal away win as City commenced their quest for a third straight league crown. The England star's goals all came in the second half after Gabriel Jesus prodded the champions ahead in the 25th minute of a one-sided affair.

Sterling's well-worked first goal came six minutes after the interval and though a VAR review found he was offside before Jesus tapped in, City did get their third when he struck 15 minutes from time.

The former Liverpool player could have added the third from the spot after Issa Diop fouled the excellent Riyad Mahrez but he gifted the penalty to Sergio Aguero. The substitute's initial attempt was saved before he converted a re-take due to VAR showing Declan Rice encroached before clearing the rebound.

Sterling was not to be denied the match ball, though, as he raced clean through to convert a pass from Mahrez in added time.

8 - Raheem Sterling is the eighth player to score a hat-trick on the opening weekend of a Premier League season, and the first since Didier Drogba in 2010-11. Treble. #WHUMCI

MISERABLE STARTS FOR SAINTS AND WATFORD

Ashley Barnes' double was key as Burnley scored three times in the space of 12 second-half minutes to stun Southampton in a 3-0 win at Turf Moor, Johann Gudmundsson's impressive solo goal putting the icing on the cake.

New signing Neal Maupay, who arrived for a reported £20million, scored on his debut to help Brighton defeat Watford by the same scoreline at Vicarage Road.

The former Brentford striker followed fellow substitute Florin Andone by netting in the second half, Abdoulaye Doucoure's dreadful own goal after 28 minutes having set Graham Potter's new side on their way.

The Clarets are off to a winning start, with a brace from Ashley Barnes and a delightful Johann Berg Gudmundsson strike. pic.twitter.com/SuVluJqCN9

Substitute Billy Sharp finished off a goalmouth scramble with two minutes remaining to earn newly-promoted Sheffield United a 1-1 draw away to Bournemouth.

Chris Mepham had earlier put the hosts in front when he converted a close-range rebound, but Sharp ensured the Blades got something from their first Premier League game since 2007.

There was also a draw as Crystal Palace held Everton at Selhurst Park, with the visitors having Morgan Schneiderlin sent off with 14 minutes remaining.

The midfielder picked up a second yellow card for a high foot Luka Milivojevic, while Wilfried Zaha - who reluctantly had to stay at Palace having been heavily pursued by Everton in the transfer window - played the last 25 minutes after coming off the bench.