El Clasico: How Lionel Messi And Barcelona Turned Their Season On Its Head

After losing 3-1 to Real Madrid in October, it was all doom and gloom at Barcelona. But much has changed ahead of Saturday's clash.

It was billed as one of the most important Clasicos in years. The outcome, it was said, could set the tone for the entire season and, by extension, the future of Lionel Messi. (More Football News)

The Argentinian's revelation he wanted to leave was still ringing in the ears of Barca directors two months on in October last year. While they'd managed to keep hold of him, owing to Messi's reluctance to drag his club through the courts, his form on the pitch hardly suggested he was at peace.

One goal in four LaLiga matches heading into that October 24 Clasico was his slowest start to a season since 2005-06 when he was a fresh-faced teenager still trying to establish himself.

What followed at Camp Nou on that Saturday looked set to plunge Barca further into crisis, as the Catalans lost 3-1 to Madrid despite dominating much of the match. It was a bad look for new coach Ronald Koeman – already under-fire – as well as Messi, whose failure to score took him to 515 minutes without a goal against Los Blancos in LaLiga, just seven shy of his worst ever barren run in El Clasico.

Messi's proviso for staying beyond the end of 2020-21 was that Barca had to look capable of winning titles; while supporters felt hard done by given Sergio Ramos' theatrics when winning a penalty, there was little in the Blaugrana's performance to suggest a title tilt was realistic.

But here we are, a little over five months later, and the outlook is rather different.

Koeman gets to know his squad

"Koeman explodes," read the front page of Mundo Deportivo the next day. "A Clasico robbery," declared Sport. Both publications listed their grievances with the result but largely glossed over Barca's issues.

This was more than just a one-off defeat in a Clasico, it was the second of four league losses in a run of just seven games. That run, culminating in a shock loss to promoted Cadiz in December, saw them suffer at least four defeats in the first 10 LaLiga matches of the season for only the second time since 1988. 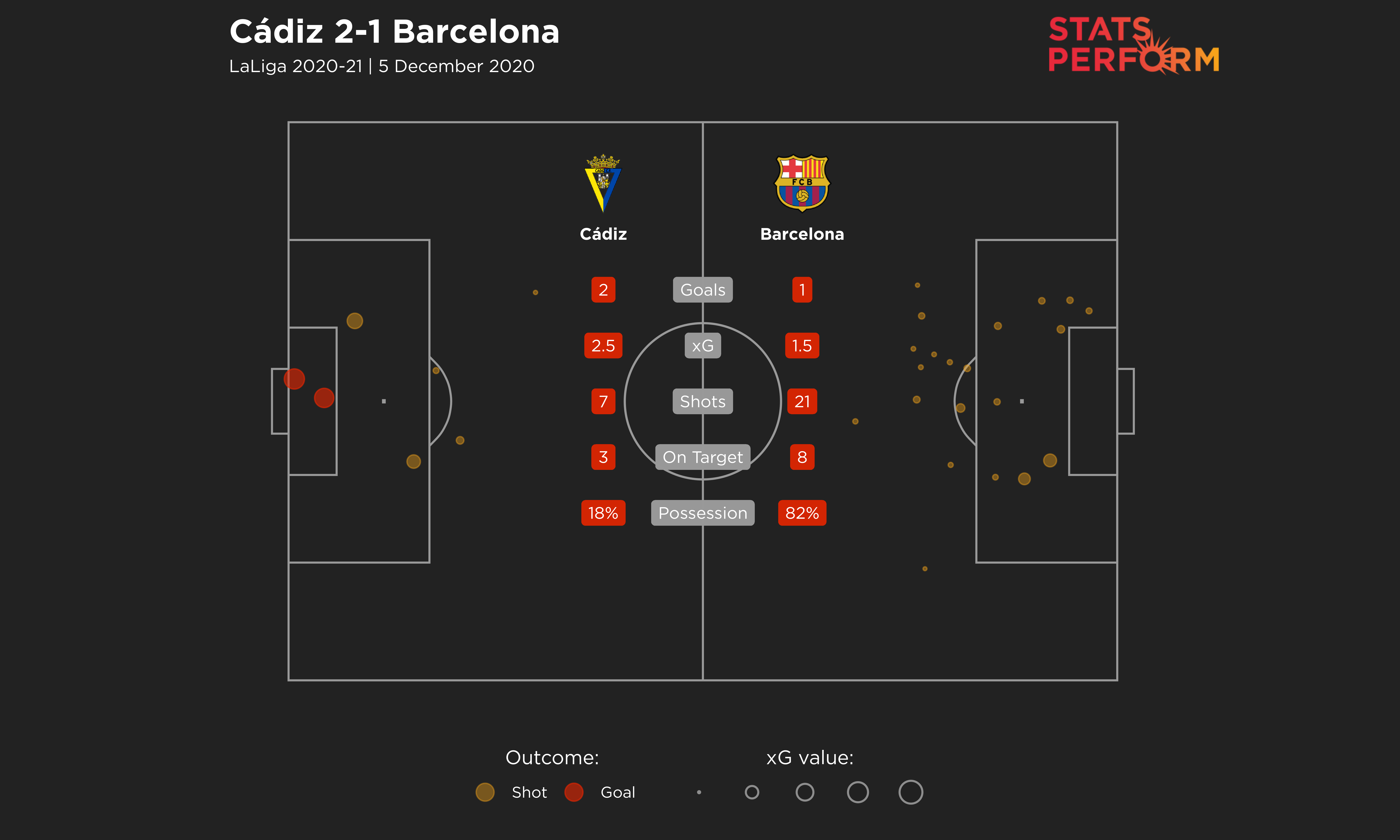 Much of the blame was laid at the feet of Koeman.

His decision to implement his favoured 4-2-3-1 system wasn't necessarily surprising, but given Barca's attachment to 4-3-3, it was certainly seen as a bold move.

To say that it flatly didn't work wouldn't be entirely accurate, but Koeman's subsequent search for alternative set-ups speaks to the fact Barca weren't convincing.

Since suffering back-to-back defeats to Cadiz and Juventus at the start of December, Koeman has largely – depending on personnel and opponents – switched between 4-3-3 and 3-4-2-1.

While their form hasn't been perfect across all fronts, they've not lost a LaLiga game since. The move to a back three in particular has appeared to resonate with the Barca squad, winning six of seven league – and conceding just three goals – matches when operating with such a defensive structure.

That 85.7 per cent win ratio is a significant improvement on the 63.6 per cent recorded in games where they've deployed a back four, suggesting the three-man defence allows for greater harmony across the team.

Koeman's tinkering has helped bring the best out of several areas of the team, but most notably the centre of midfield. While Sergio Busquets has received widespread praise, arguably the two main benefactors have been Frenkie de Jong and Pedri.

De Jong's first season at Barca, while by no means bad, was hardly scintillating, and Koeman's arrival initially saw him placed in a double pivot, though activity maps show he often got drawn out to the left.

But over the season as a whole, compared to 2019-20, De Jong has clearly made good strides and is enjoying greater attacking freedom.

But it's De Jong's general influence that has increased most, with his 87.1 touches per game up considerably from 66.2, while he averages 25.3 carries per game, as opposed to 17.7 last term.

Not only have De Jong's team-mates seemingly placed greater trust in him, but he's relishing the added responsibility. The Netherlands midfielder is seeing much more of the ball and using his increased influence effectively.

No player in LaLiga has covered more distance carrying the ball upfield than De Jong (4,375.8 metres), while he also leads the league in total progressive carries (405) and is second only to Pau Torres on progressive carries of 10 yards or more (168).

Indeed, De Jong ranks towards the top of almost every metric relating to ball carries, highlighting just how important he is to Barca getting up the pitch.

It quickly became clear Pedri was going to establish himself in the Barca first-team squad following his move from Las Palmas, convincing the club they would be better served keeping the teenager around than sending him out on loan.

But it's only been since Koeman altered his position that he's really come to life, essentially nailing down a place in the starting XI.

For the first few months of the season, Pedri often operated from a slightly wider position, cutting in from the left onto his right foot. Now, while he still often drifts out to the left flank, the Spain international is spending more time in the central zone outside the opposition's penalty area. 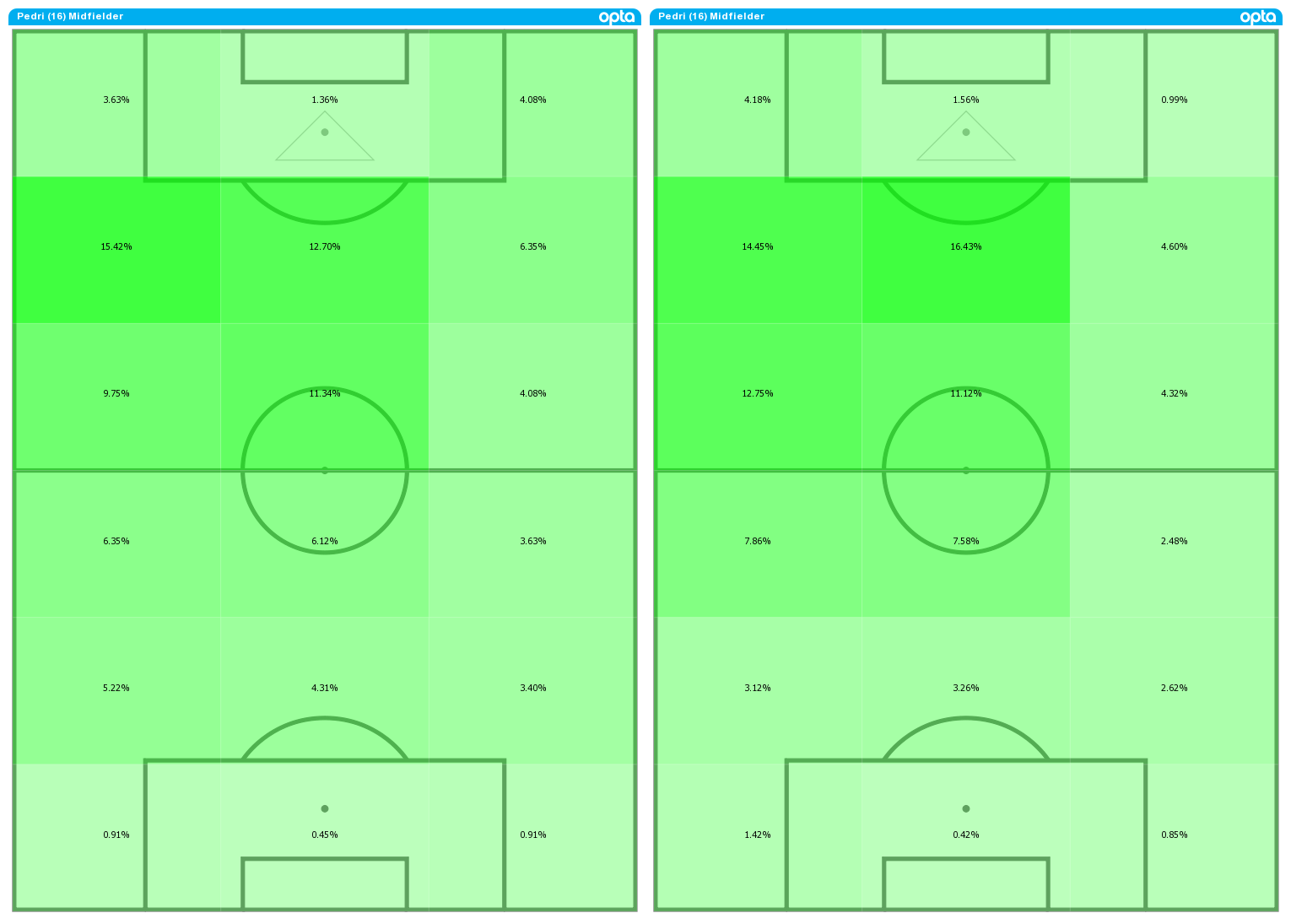 He is averaging 26.9 more touches per game since the first 10 matches of the season – understandable given he's operating closer to the thick of the action – and that in turn has helped him create 1.4 chances per game, up from 0.8.

But to focus solely on that would be to do Pedri a disservice. His talent as a fine passer and nimble mover make him the ideal attacking conduit, as evidenced by his 132 shot-ending open-play sequences – ranking third among LaLiga midfielders to have played 900 minutes or more this term.

In fact, of these players, Pedri is involved in the most shot-ending open-play sequences per 90 minutes (6.2).

Andres Iniesta comparisons might be considered a little over the top at this point, but there's certainly no doubt the teenager is thriving. Maybe he could be the World Cup winner's heir...

The chief instigator in Barca's revival has, of course, been Messi himself. Having only scored four times, with no assists, in Barca's first 10 league games this term, he's netted 19 and laid on eight in 17 since.

It has been a remarkable resurgence and central to Barca's climb up the table, with the Blaugrana's unbeaten run undoubtedly inspired by their talisman.

Again, there's not a huge difference in his expected goals (xG) value per shot, with his efforts worth 0.11 on average until December 6 and 0.13 since, yet Messi has gone from underperforming his overall xG (four goals, 5.6 xG) to massively overperforming (19 goals, 12.9 xG). 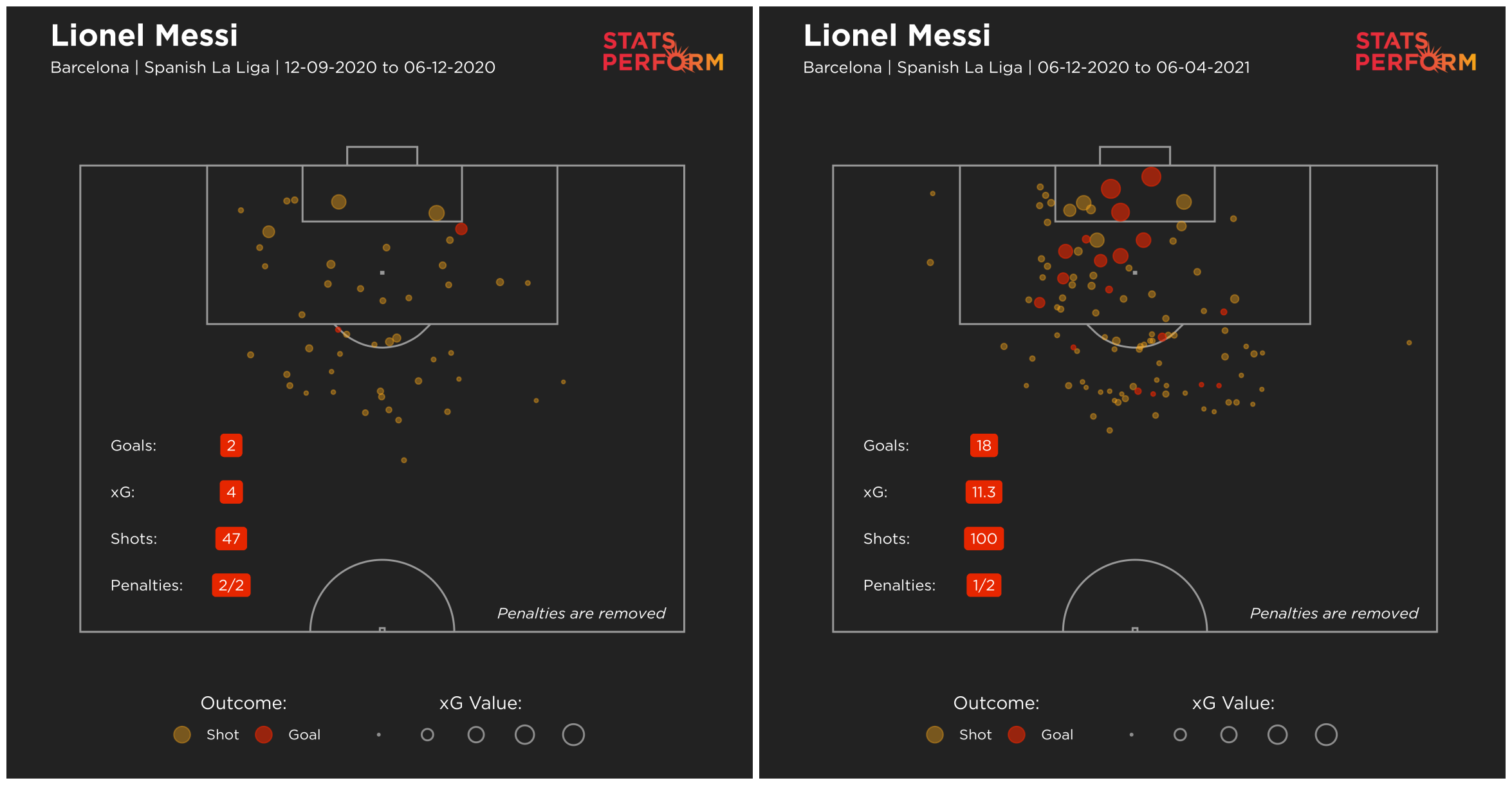 One potential explanation comes from looking at his shot maps over the two periods in question. Messi does now appear to be getting into the centre of the box more often, with as many as 10 of his 18 goals (excluding penalties) coming from this part of the pitch.

But it's also worth bearing in mind that Messi, without a significant pre-season, saw his preparations for the new campaign interrupted heavily by the off-field controversy. That period of turmoil will surely have taken its toll mentally, perhaps making it inevitable that his focus should drift and his form suffer.

Whatever the reason, Koeman has got Messi back on track and his team-mates able contributing in recent months, seemingly ensuring the coach will be safe for another season.

But the job is not done yet. Messi wanted Koeman and Barca to prove that winning titles was possible. They've more or less done that and now need his brilliance to guide them through a do-or-die Clasico.