Ranked fourth in the qualification round, Archer Deepika Kumari lost to Korea's An San in straight sets at Tokyo. 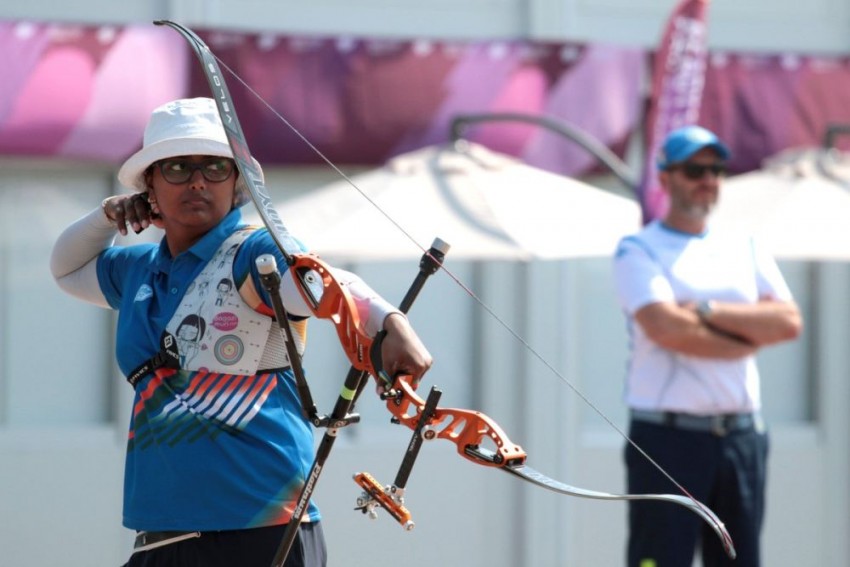 This was Deepika Kumari's first individual final in a world event since she won a gold at the third stage of the Archery World Cup in Salt Lake City in June 2018.
Twitter
Outlook Web Bureau July 17, 2019 00:00 IST Deepika Kumari Settles For Silver At Tokyo 2020 Archery Test Event 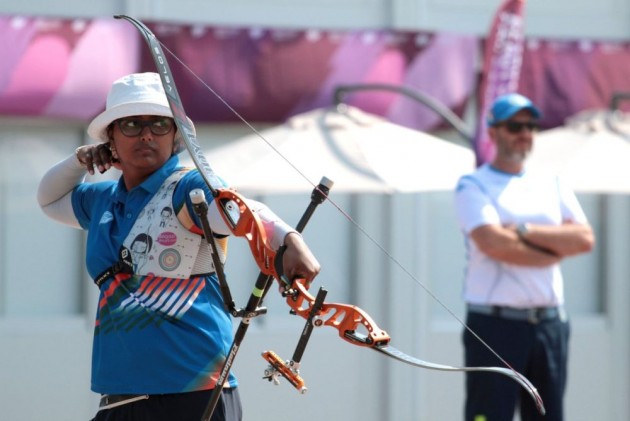 India's top-ranked woman archer Deepika Kumari Wednesday settled for a silver medal at the 2020 Tokyo Olympic Games test event after going down to 18-year-old Korean An San in straight sets.

Ranked fourth in the qualification round, Deepika found the going tough against the second seed, who produced fine shooting including a flawless third set to clinch the match 6-0 in her favour.

A double gold medallist at the recently-concluded fourth stage of the World Cup in Berlin, San took the first set narrowly when she pipped the Indian by one point.

The Korean then won won the second set 29-25, before three perfect 10s won her the gold.

ALSO READ: It Is A Tough Road Ahead, But I Am Not Finished Yet - Dutee Chand

"I was doing it perfectly but in the final I couldn't really catch up with my shooting," Deepika said after her loss in the final.

"Recently, I changed my technique. I'm catching up. That's why the different score," the 25-year-old said.

"I learnt a lot of things from here. I will improve. When I lose a match, I totally forget my shooting. I've to work on that."

The Indian women's team are yet to qualify for the next year's Olympics but Deepika said the exposure will help.

"We saw the place. Hopefully we qualify for the Olympics if we perform the same," the former world number one said about the event at the Yumenoshima Archery Field, which is hosting its first international competition ahead of Tokyo Olympics.

This was Deepika's first individual final in a world event since she won a gold at the third stage of the World Cup in Salt Lake City in June, 2018.

The silver medal for Deepika will definitely boost the sagging morale of Indian women's archery contingent, who missed the Olympic quota places for Tokyo Games.

"I'm improving myself. We don't have any Olympic medal. We will try our best for next year and hopefully we win the medal. We have to qualify for next year. Our team is confident," said Deepika, targetting Olympic qualifications through the Asian Championships in Bangkok from November 21-29.

In the semi-final, she thrashed China's eighth seed Zheng Yichai 6-0, but Deepika was at her best in the quarter-final against Italy's Tatiana Andreoli as she bounce back from a 0-4 deficit to win 6-5 in the tiebreker.

Earlier, Deepika defeated Lee Shuk Kwan of Hong Kong (6-0) in the first round, before ousting Anastasia Pavlova (6-4) of Ukraine and Sonoda Waka of Japan (6-0).

Deepika's experienced teammate Laishram Bombayala Devi lost in the second round to Malayasia's Nur Aliya Ghapar 5-6 in a thrilling tiebreaker that was decided on who shot nearest to the bull's eye.

The third Indian woman challenger Komalika Bari was thrashed by Inna Stepanova 4-6 in the first round.

In the men's category, India had a forgettable outing with country's top-ranked Atanu Das making a second round exit, losing to Bae Jaehyeon of Korea 4-6.

Army duo of Tarundeep Rai and Pravin Jadhav lost in their respective first round matches.