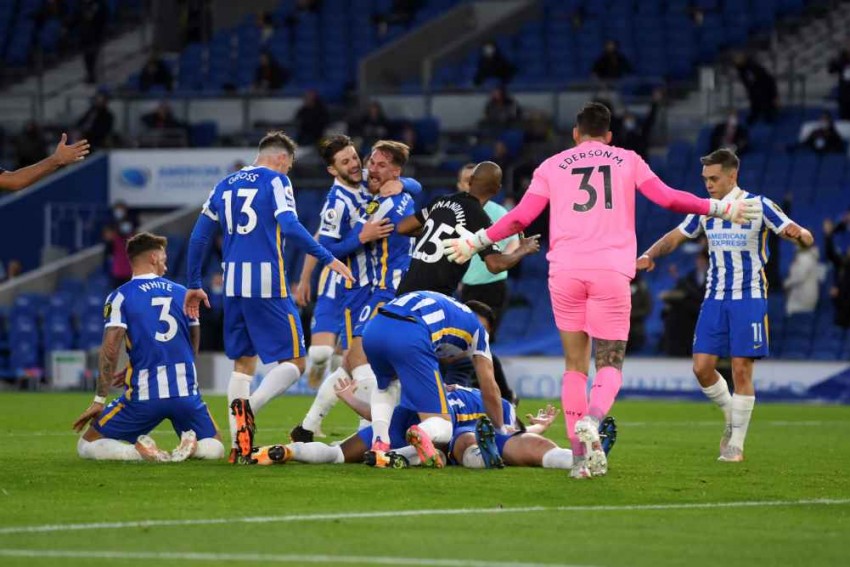 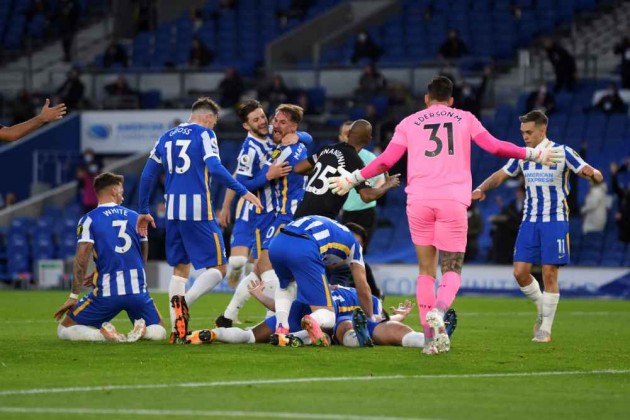 The Premier League champions led early through Ilkay Gundogan but had to play for over 80 minutes without Joao Cancelo, who was sent off for a foul on Danny Welbeck. Buoyed by an 8,000-strong crowd, Brighton eventually made their numerical advantage count.

Phil Foden's sensational solo goal seemed to have dampened the spirits, but Leandro Trossard's strike ignited the charge which was rounded off by two unlikely scorers.

With Gundogan trudging off with a worrying knee injury, City found their lead wiped out when Adam Webster powered home, before Burn scooped in at the second attempt four minutes later to cap a famous triumph for the Seagulls.

Pep Guardiola became the fourth Premier League manager to see his team score 10 times in the first two minutes of a top-flight game as they went ahead 107 seconds into proceedings – Gundogan deftly heading home from Riyad Mahrez's pinpoint delivery.

But any assumptions of an easy ride were dispelled in the 10th minute, Cancelo receiving a straight red card for the denial of a goalscoring opportunity when he tangled with Welbeck.

3 - Man City are only the third side in Premier League history to both score a goal and have a men sent off in the opening 10 minutes of a match in the competition, after Blackburn v Leeds in February 1995 and Norwich v Portsmouth in January 2005. Eventful. pic.twitter.com/joZ4DIxePo

Brighton recorded more shots and registered more possession in the first half but for all their efforts, they were 2-0 down to a piece of supreme individual skill moments after the restart.

Having skipped away from Ben White, Foden capped off a run which started in his own half with a clinical, toe-poked finish across Robert Sanchez.

Brighton hit back within three minutes, though, as substitute Trossard – on for the injured Welbeck – kept his composure to round a glut of City defenders and lash the ball high into the net.

Having continued following a robust first-half challenge from Alireza Jahanbakhsh, Gundogan was forced off with a knee injury soon after, and City's resolve crumbled in the 72nd minute.

Webster towered over City's defence to head in Pascal Gross' cross, setting the stage for fellow defender Burn, who was initially denied by Ederson, to drill in a winner.

After Adam Lallana survived a VAR check for a tackle on Gabriel Jesus, Webster nearly went from hero to zero for Brighton when he cleared straight to Fernandinho.

Jesus' resulting effort drew a fine save out of Sanchez and Eric Garcia could only hammer over the rebound, meaning City lost their final away game of the season for the first time since 2008-09.

What does it mean? Plenty of promise for Potter

It has been a frustrating season for Brighton, with some huge highs but some sorry lows, though Graham Potter – linked with Tottenham – will emerge with plenty of credit in the bank.

Brighton may have had the numerical advantage for much of the contest, but they were well worthy of the points, having more possession (63 per cent) and shots (19 – six on target) as they went on to clinch a first league win over City since April 1989, while their previous success in the top flight occurred in 1981.

Trossard inspirational but Burn the hero

Welbeck's injury may ultimately have been a blessing in disguise for Brighton, as his replacement Trossard inspired the comeback with his fifth league goal of the season – and his fourth at home.

Burn was then the unlikely hero at the end, scoring his first goal since April 2018, when he netted for Wigan Athletic.

Gundogan's sixth away league goal of 2020-21 seemed to be setting City on their way, but he was not on the pitch as Guardiola's team capitulated.

The midfielder had an ice pack placed on his left knee following his substitution, and City will hope it is nothing too serious ahead of next week’s Champions League showdown with Chelsea.

- City have lost six Premier League games having led by two or more goals – only Tottenham (8) have suffered more such defeats in the competition's history.
- This was just the second time in Premier League history a team starting the day top has led by two or more goals and lost, after City themselves did so against Manchester United in April 2018.
- City's possession figure in this match was just 37 per cent - the lowest recorded by a side managed by Pep Guardiola in a single top-flight match.
- Foden has scored 15 goals in all competitions this season. Among players in the top five European leagues currently aged under 21, only Erling Haaland (39) has scored more.
- Cancelo's red card at 09:03 was City's second earliest from the start of a Premier League game, after Dedryck Boyata was dismissed at 04:28 against Arsenal in October 2010.

City round off their campaign against Everton, with the champions able to celebrate their title with some of their fans at the Etihad Stadium. Brighton, meanwhile, visit Arsenal.

Ahead Of ICC Meet, BCCI Calls SGM On May 29 To Discuss Hosting Of T20 World Cup Amid COVID-19