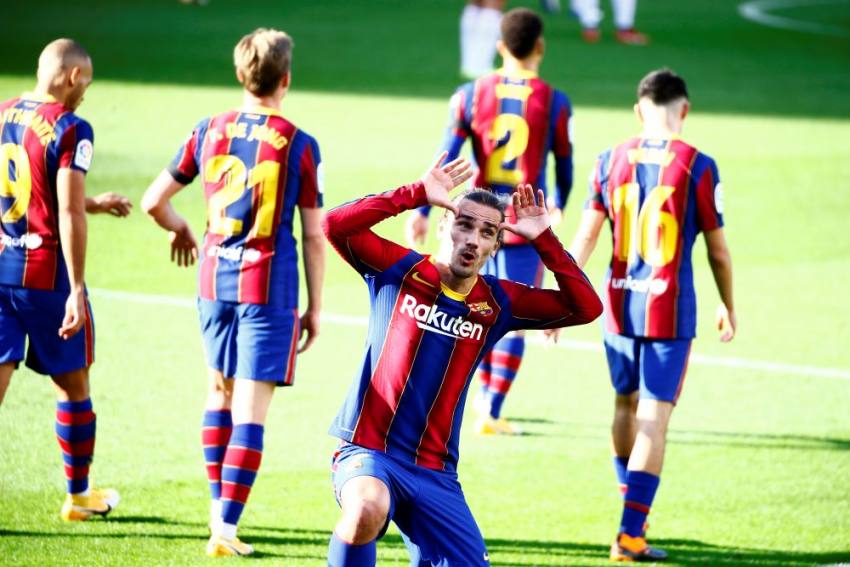 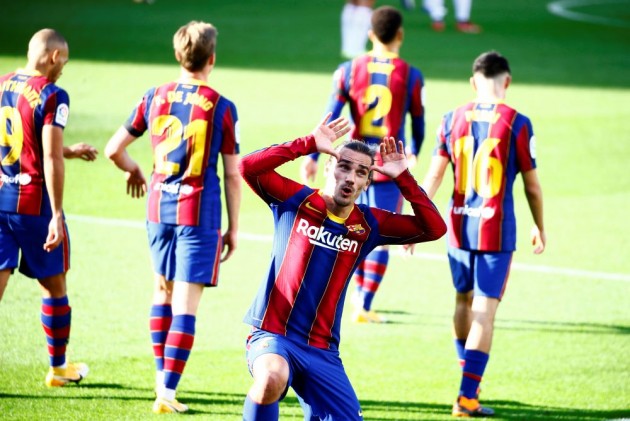 Ronald Koeman had called on his players to produce a performance befitting the former Barca and Argentina star, who died this week.

They duly delivered, Griezmann scoring the pick of the goals in a fine performance against a side who won 2-1 at this ground in July.

There were also goals from Martin Braithwaite, Philippe Coutinho and Messi, who honoured compatriot Maradona with his celebration after scoring the fourth.

A brilliant goal-line clearance from Unai Garcia stopped Coutinho from opening the scoring after Griezmann teed up the Brazilian.

The breakthrough eventually came in scrappy fashion. Messi's pass split the defence, Jordi Alba found Coutinho, Sergio Herrera saved his shot and Braithwaite's rebound, but the latter managed to bundle the ball over the line with Messi's help.

Ante Budimir turned past Marc-Andre ter Stegen after a brilliant double save by the keeper, but the goal was correctly ruled out for offside against Oier Sanjurjo.

Barca doubled their lead just two minutes later, Griezmann walloping a volley past the motionless Herrera after Alba's cross had been cleared to the edge of the box.

Griezmann turned provider 11 minutes into the second half, teeing up Coutinho for a tap-in after good work from Braithwaite to win back possession in the Osasuna half.

A good outing for the Catalans was soured when they suffered another defensive injury, Clement Lenglet unable to continue after apparently taking damage to his ankle.

Roberto Torres rattled the post before Ousmane Dembele had a goal ruled out for offside, but Messi soon made it 4-0 with a fierce strike from the edge of the box, the Argentine then removing his Barca shirt to reveal a Newell's Old Boys jersey emblazoned with the number 10.

What does it mean? Barca edge closer to leaders

Barca's victory moves them into seventh place, three points behind champions Real Madrid in fourth, with a game in hand.

They can take some confidence into coming league matches with Cadiz and Levante before the meeting with leaders Real Sociedad on December 16.

Osasuna are 15th, three points above the relegation places.

A turning point for Griezmann?

Griezmann seemed to vent months of frustration with his emphatic volley, but he had already looked Barca's brightest attacking player before then.

The France star hit the target with three of his four shots, completed more passes than any other forward (69) and looked, at last, to be enjoying himself.

Any serious injury to Lenglet would leave Barca without a fit senior centre-back, with Gerard Pique, Samuel Umtiti and Ronald Araujo all sidelined.

Osasuna offered scant attacking threat, with five shots on target and all those in the second half, but there are tougher opponents to come in December.

27 - Lionel Messi has scored or assisted in each one of the last 27 @FCBarcelona games when the Blaugrana side have scored four o more goals in all competitions (50 goals and 19 assists). Figure. pic.twitter.com/iUQRfcpm1n

- Barcelona have scored 13 goals in their past four games in all competitions (3.2 on average) after scoring 19 in the first nine games under Ronald Koeman (2.1 on average).
- Lionel Messi has scored 23 goals in 19 LaLiga games against Osasuna and has scored at least one goal in his previous seven league games against them at Camp Nou (15 goals in total in this streak).
- Antoine Griezmann has been involved in six goals in his past six games in all competitions (four scored, two assisted) after being involved in only one in the previous 20.
- Martin Braithwaite has scored two goals with just five total shots this season in all competitions (60 per cent accuracy). No other Barcelona player has a better shot conversion rate so far.
- Philippe Coutinho attempted six shots in this game, his best figure of the season and the best in the same game for Barcelona in all competitions since April 2019 (six versus Levante).

Barca, who have already qualified for the Champions League last 16, visit Ferencvaros on Wednesday before next Saturday's league trip to Cadiz. Osasuna have a week to prepare for a home game against Real Betis.