Shakib had earlier hit the headlines for wrong reasons in 2019 when he was slapped with a two-year ban, one year suspended, for not reporting a corrupt approach. 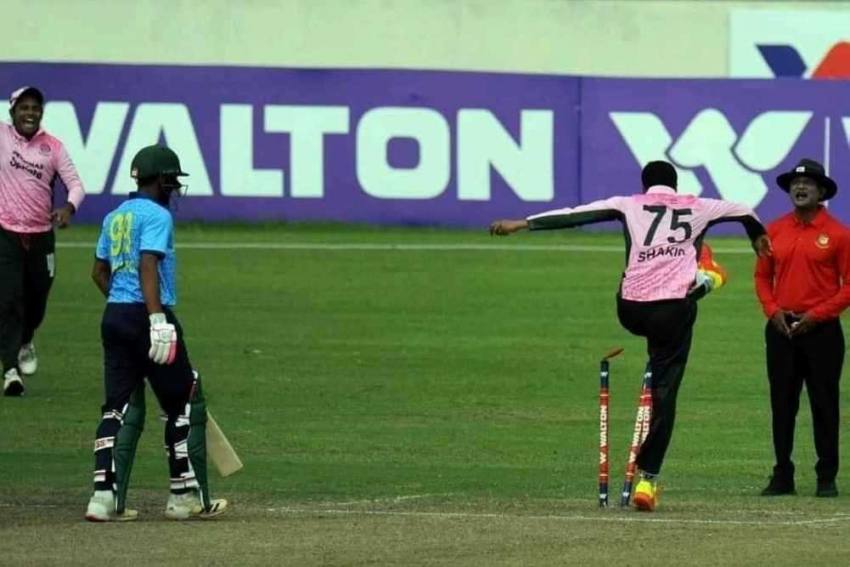 Star Bangladesh cricketer Shakib Al Hasan had a shocking on-field meltdown during a domestic T20 match here on Friday, kicking stumps and arguing with umpires in a display of appalling behaviour for which he later apologised calling it "human error". (More Cricket News)

Shakib's anger got the better of him during his team Mohammedan Sporting's game against Abahani Limited. The Dhaka Premier league encounter was eventually won by his team via the Duckworth-Lewis method. Shakib plays for Kolkata Knight Riders in Indian Premier League (IPL).

Shakib's apology notwithstanding, kicking the stumps is as good as a Level 3 offence and could lead to one-match suspension for the former Bangladesh skipper.

"I am extremely sorry for losing my temper and ruining the match for everyone and especially those who are watching from home. An experienced player like me should not have reacted that way but sometimes against all odds it happens unfortunately," Shakib tendered an official apology in his facebook page.

"I apologise to the teams, management, tournament officials and organizing committee for this human error. Hopefully, I won't be repeating this again in the future. Thanks and love you all," he further wrote.

During the match held at the Sher-e-Bangla Stadium, a Mushfiqur Rahim leg before appeal being turned down by the umpire led to the furious captain kicking the stumps.

On the second occasion, he ran from his mid-off position to uproot all the stumps at the non-striker's end when the two match officials called for a rain break with one ball left in the sixth over of the Abahani innings.

The footage of the incident since then has gone viral and it is believed that he was angry because one more delivery would have ensured that minimum six overs are completed for a match to yield a result.

The match did start eventually and his team won easily.

He was also caught on camera getting into an ugly altercation with former Bangladesh international and current BCB director Khaled Mahmood Sujon.

The 34-year-old Shakib has scored over 10,000 international runs and picked nearly 600 wickets across formats and considered one of the finest spin bowling all-rounders in contemporary cricket.

Shakib had earlier hit the headlines for wrong reasons in 2019 when he was slapped with a two-year ban, one year suspended, for not reporting a corrupt approach.