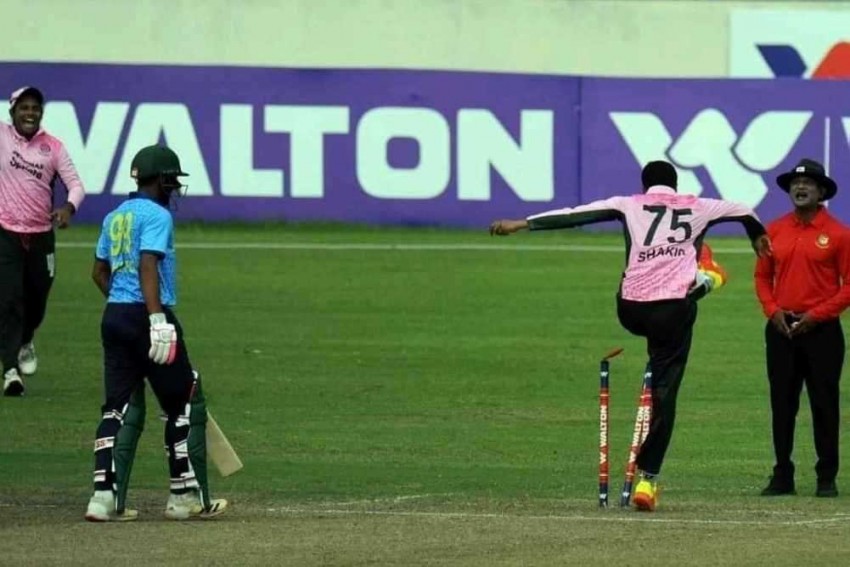 Bangladesh cricketer Shakib Al Hasan kicked stumps and argued with umpires after his appeal of leg before against Mushfiqur Rahim was turned down.
Courtesy: Twitter
Outlook Web Bureau 2021-06-12T09:25:44+05:30 'He is Not A Villain', Shakib Al Hasan's Wife Defends Cricketer's Bad Behaviour During Dhaka Premier League 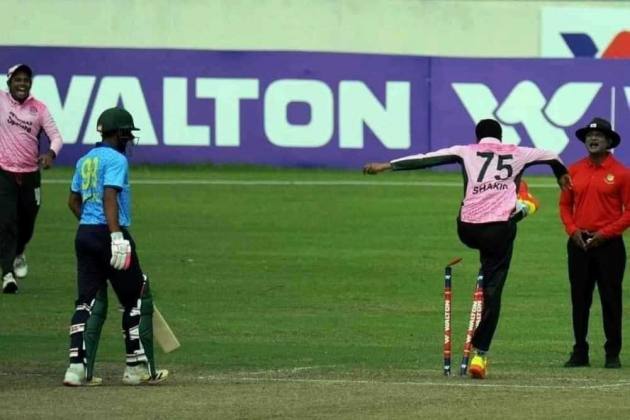 Ummey Al Hasan, Shakib Al Hasan’s wife, has come out in support of her husband after the Bangladesh’s star cricketer kicked stumps and argued with umpires during a Dhaka Premier League match on Friday. (More Cricket News)

The cricketer kicked stumps and argued with umpires after his appeal of leg before against Mushfiqur Rahim was turned down. Shakib Al Hasan plays for Kolkata Knight Riders in Indian Premier League (IPL).

On the second occasion, he ran from his mid-off position to uproot all the stumps at the non-striker's end when the two match officials called for a rain-break.

Shakib Al Hasan, 34, later apologised and said, “"I am extremely sorry for losing my temper and ruining the match for everyone and especially those who are watching from home. An experienced player like me should not have reacted that way but sometimes against all odds it happens unfortunately."

But his wife Ummey backed her husband and said that it was a plot to portray Shakib as ‘villain’. In a Facebook post she also raised doubts on the decision of the umpire.

“I’m enjoying this incident as much as the media is, finally some news on TV! It is great to see the support of the people who can see the clear picture of today’s incident at least someone has the guts to stand against all odds. However it is sad to see the main issue getting buried by the media highlighting only the anger that he showed. The main issue is the ongoing eye catching decisions of the umpires! The headlines are really saddening. To me it is a plot against him that has been going on for awhile to portray him as the villain in all circumstances! If you are a cricket lover beware of your actions!” Ummey wrote.

Shakib Al Hasan has scored over 10,000 international runs and picked nearly 600 wickets across formats and is considered one of the finest spin bowling all-rounders in contemporary cricket.

Shakib Al Hasan had earlier hit the headlines for wrong reasons in 2019 when he was slapped with a two-year ban, one year suspended, for not reporting a corrupt approach.