Nadal opened his bid for a record 21st grand slam title with a straight-sets win over Laslo Djere at the Australian Open on Tuesday. 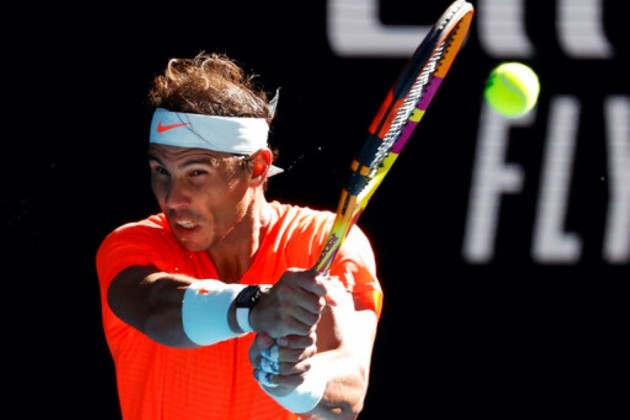 Rafael Nadal opened his bid for a record 21st grand slam title with a straight-sets win over Laslo Djere at the Australian Open on Tuesday. (More Sports News)

World number two Nadal, level with the absent Roger Federer for the most men's slams in history, defeated Djere 6-3 6-4 6-1 in the opening round in Melbourne.

Nadal needed less than two hours to earn a meeting with either Viktor Troicki or Michael Mmoh as he appeared to dismiss concerns regarding his fitness at Melbourne Park.

All eyes were on Nadal due to a back problem, which left the star unable to compete for Spain in last week's ATP Cup.

But Nadal looked comfortable as Rod Laver Arena was bathed in sunshine, racing out to a commanding 5-1 lead behind a double-break advantage.

Djere – whose racquet went flying out of his hand and into the court as he served in the fourth game – looked overawed, however once he settled, the Serb reeled off seven successive points to unsettle Nadal.

Nadal, though, survived the fightback to close out the first set from a 0-30 deficit, despite his unforced-error count blowing out to 13 – one more than Djere.

Djere showed glimpses as he continued to make things difficult for Nadal, who had only lost twice previously in the first round of a slam – Steve Darcis (2013 Wimbledon) and Fernando Verdasco (2016 Australian Open).

But Nadal had all the answers, reducing his unforced-error count to nine and raising his winners to eight to claim a commanding two-sets-to-love lead.

Nadal boasted an intimidating record when winning the opening two sets of a slam match – 216-1, with his only loss coming to Fabio Fognini at the 2015 US Open – and he never looked back against Djere.