Naomi Osaka and Garbine Muguruza set up a blockbuster clash at the Australian Open, while Aryna Sabalenka cannot wait to face Serena Williams. 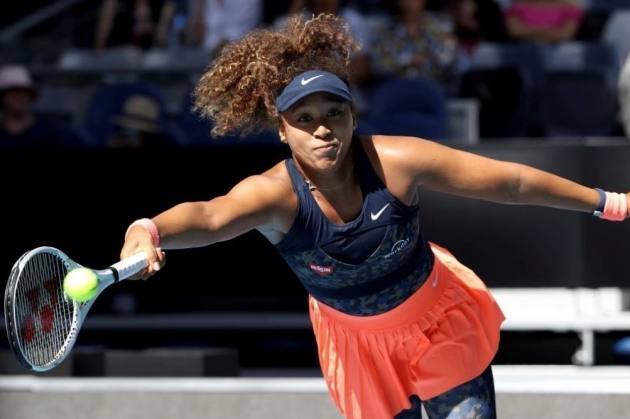 As Williams was tested before winning through, Osaka and Muguruza raced through their third-round outings in Melbourne on Friday.

Osaka and Muguruza dropped just seven games between them to set up what will be their first meeting, which will take place without fans in attendance as Victoria prepares to move into a five-day lockdown beginning on Saturday due to coronavirus concerns.

Sabalenka also progressed and will next face Williams, while Simona Halep cruised through.

Osaka, the three-time grand slam champion, brushed past fellow seed Ons Jabeur 6-3 6-2 in the third round.

The Japanese star, winner of the Australian Open in 2019, is looking forward to facing fellow major champion Muguruza.

"I've practised with her once, but it was on grass, and I was younger. It was maybe like a couple years ago," Osaka said.

"But I just remember being really impressed by her, and for me, I've watched her win Wimbledon and win the French Open when I was younger, and I've always wanted to have the chance to play her. So for me, this is really exciting."

A finalist at the Yarra Valley Classic last week, Muguruza's strong start to the Australian Open continued with a 6-1 6-1 thrashing of Zarina Diyas.

"I don't think we've played each other before. Just looking forward for a fourth round, a good fourth round, playing the top players," Muguruza – who has lost just 10 games in the first three rounds – said ahead of facing Osaka. "I feel like that's always the right way, you know, a good sign. Just expecting a good match."

In her 101st Australian Open match, Williams secured her 90th career victory in Melbourne. The 39-year-old also improved her overall slam record to 360-51 – Martina Navratilova (306-49) is the only other player to pass 300 wins in the Open Era.

Walking off a winner for the 90th time at the #AusOpen #AO2021 pic.twitter.com/HoXlYQ5pwb

Next up for Williams is Sabalenka, who was too good for Ann Li, winning 6-3 6-1 to reach a major fourth round for just the second time in her career and first in Melbourne.

The Belarusian seventh seed is not daunted by the task facing her when she meets the American for the first time.

"I want to get this thrill. Can I say thrill? I said it right. So it's going to be a thrill. But, yeah. I'm going to do everything I can," Sabalenka said.

HALEP THROUGH AS SEEDS CRUISE

Halep reached the fourth round in Melbourne for the sixth time with a convincing 6-1 6-3 win over Russian 32nd seed Veronika Kudermetova.

Awaiting the two-time major winner in the fourth round is Iga Swiatek after the Polish 15th seed got past Fiona Ferro 6-4 6-3.

Swiatek thrashed Halep 6-1 6-2 on her way to the French Open title last year.

Marketa Vondrousova, the 2019 French Open runner-up, reached the fourth round of the Australian Open for the first time after beating Sorana Cirstea 6-2 6-4.

Errani had won her previous three meetings with Hsieh in straight sets, including winning a set 6-0 - known as a 'bagel' in tennis parlance - in each of those victories.

It meant Hsieh, 35, had a simple plan against the Italian.

"I don't remember when I lose to someone but someone reminded me I eat the bagel every time so I said, 'Okay, I will try to not take any bagel today'," she said.