Goals from Angel Correa and Saul Niguez did the damage as Atletico Madrid beat Sevilla 2-0 on Tuesday, extending their lead atop LaLiga. 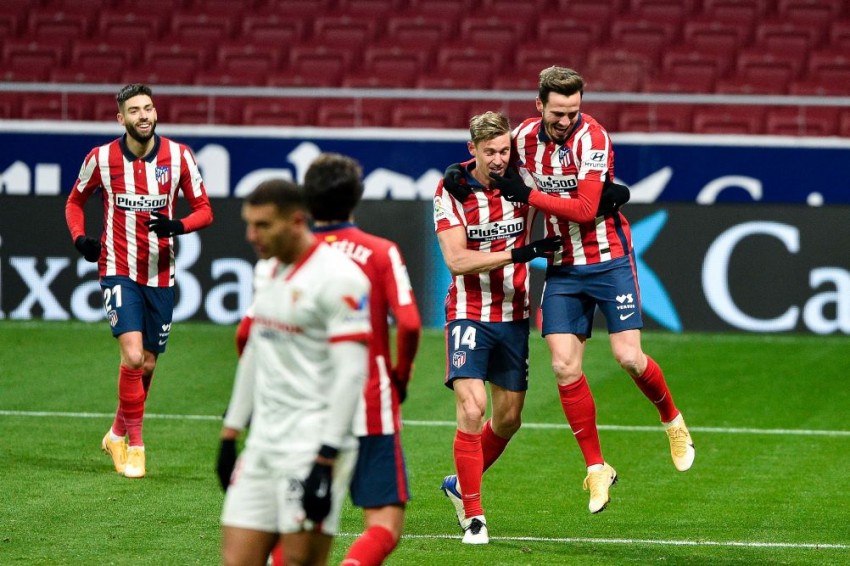 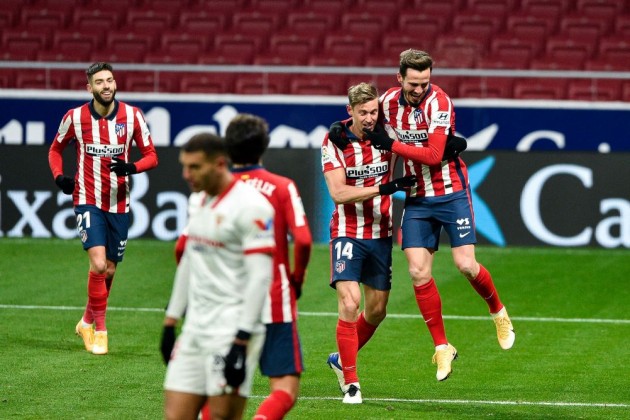 Atletico Madrid extended their lead at LaLiga's summit to four points as they saw off Sevilla 2-0 at the Wanda Metropolitano on Tuesday. (More Football News)

Sevilla could have become the first team to draw three successive away games at the Wanda, but Atletico produced a vintage display of clinical finishing and resolute defending as they improved their position at the top of the table.

Atletico edged an even first half and went ahead through Angel Correa's clinical finish with just over quarter of an hour played, though Sevilla did trouble Jan Oblak through Ivan Rakitic and Youssef En-Nesyri.

The visitors dominated proceedings in the second period but struggled to find a way through Atletico's famously shrewd defence, who ultimately claimed an 11th clean sheet in LaLiga this term as Saul Niguez put the game beyond Sevilla in the latter stages.

Sevilla looked bright in the opening exchanges as Rakitic tested Oblak early on, but they found themselves trailing in the 17th minute – Correa picking out the bottom-right corner with a snapshot on the swivel that caught Yassine Bounou unsighted in goal.

48,7% - 19 out of 39 goals scored by Ángel Correa for @atletienglish in all competitions (48,7%) have been the opening goal of the game. Uncork#AtletiSevillaFC #AtleticoMadrid pic.twitter.com/abJjpQKnN7

Atletico were fortunate at the other end soon after.

Oblak initially rushed out to thwart En-Nesyri and the ball fell kindly to Marcos Acuna, but the left-back shot wide of the empty net with the hosts' goalkeeper stranded.

Luis Suarez then threatened before the half-hour mark, but his close-range volley was well blocked by Bounou.

En-Nesyri tried his luck from a tight angle early in the second half, but Oblak had little issue making the save.

But while Sevilla saw much of the ball, that En-Nesyri effort was hardly the start of an onslaught and Atletico picked them off 14 minutes from time.

Marcos Llorente found space behind Acuna and Oscar Rodriguez failed to intercept his cutback, which came to Saul and he swept in from 20 yards to seal the points.

What does it mean? Atletico pass another test

Sevilla may not be the most functional team in attack, but Diego Simeone knew exactly how to beat them and Atletico did just that, confident the visitors would not have the creativity to break through.

Julen Lopetegui's visitors had a whopping 75 per cent of the possession in the second half, yet they managed just one shot on target.

On this form, it is difficult to see how anyone stops Atletico winning the title this season – they are four points clear and still have two games in hand on second-placed Real Madrid.

Of course, Sevilla's struggles in attack were not just because of their own creative issues, they were also up against some seriously impressive defenders. Jose Gimenez was arguably the pick of the bunch, with the Uruguayan dominant in his realm. He made a couple of tackles, but more importantly was in the right place and the right time to clear his lines six times, more than anyone else on the pitch.

Sevilla midfielders fail in their duty

While wingers Suso and Lucas Ocampos were not much more effective, central midfielders Joan Jordan and Rakitic were very disappointing. Neither made a single key pass despite being among the most-involved players on the pitch in terms of the number of passes made.

As a result of their shock Copa del Rey elimination, Atletico now have nine days without a game before they go to Eibar in their next league outing. Sevilla are still in the cup and face a trip to second-tier Leganes this weekend.