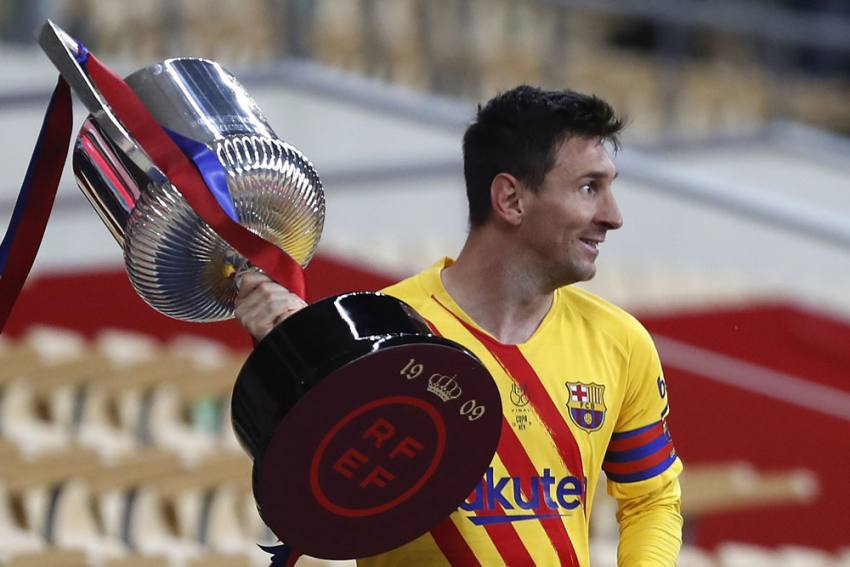 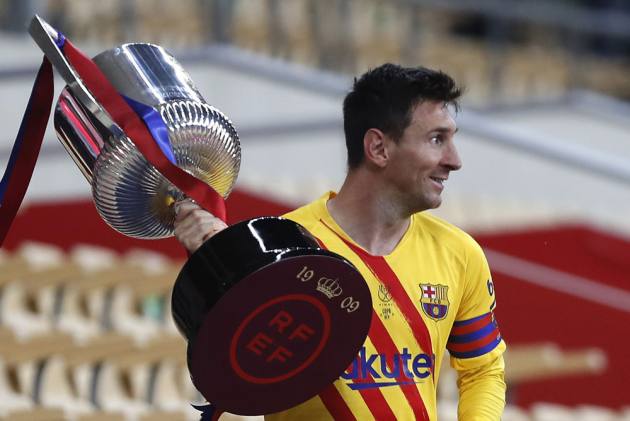 Lionel Messi scored twice as Barcelona turned on the style in the second half to beat Athletic Bilbao 4-0 in Saturday's Copa del Rey final and win their first silverware under Ronald Koeman. (More Football News)

Barca were beaten 3-2 by Athletic in January's Supercopa de Espana final and they were kept at bay by the Basque club for an hour in this latest encounter at Estadio Olimpico de la Cartuja.

But Frenkie de Jong set up Antoine Griezmann for the crucial breakthrough goal and added the second himself three minutes later, before Messi took over with a couple of quickfire strikes as Barca made it a record-extending 31st Copa del Rey triumph.

It means yet more heartbreak for Athletic, though, after they were beaten 1-0 by Real Sociedad in the delayed 2019-20 final two weeks ago.

De Jong wasted the first chance of the game five minutes in when guiding a first-time shot away from Unai Simon but against the post after being teed up by Messi.

That was as close as either side went to scoring in a relatively low-key first half that also saw Messi fire into the side-netting and test Simon from a weak angled effort.

Simon produced fine saves to keep out attempts from Griezmann, Pedri and Sergio Busquets early in the second half, but Barca's pressure eventually told.

De Jong sent in a cross from the right and Griezmann again found himself in space to this time convert from inside the six-yard box.

Netherlands international De Jong stooped in to head home Jordi Alba's cross for the second and Messi added an impressive third after starting an attack from deep, exchanging passes with De Jong and picking out the bottom-left corner.

Messi stroked home a fourth from further out after being found by Alba on the edge of the box, seeing him overtake Telmo Zarra for the most Copa del Rey final goals.

Barca had a late fifth goal from Griezmann ruled out for offside, but it did not matter as they cruised to their first Copa triumph since 2018.

What does it mean? Copa joy for Koeman, familiar story for Athletic

Koeman won the Copa del Rey as a player in 1989-90 and this first trophy success as head coach of the club will be cherished, especially given the manner of his side's second-half display.

The Catalan giants were good value for their victory in the end, finding the net from half of their eight on-target attempts, compared to just one shot on target for an Athletic side that simply failed to turn up - again.

The superstar forward was on the periphery at times in the first half but he grew into the match and scored a couple of impressive goals in the space of four minutes to confirm the win for Barca.

With his brace here, Messi now has nine goals in 10 Copa del Rey finals, ending on the winning side in seven of those. With a new deal yet to be signed, this may yet be the last trophy he wins during an illustrious career with Barca.

Prior to Messi's second goal, this was arguably going to be remembered as the Frenkie de Jong final.

The Dutchman was on target either side of setting up Griezmann and Messi, in doing so becoming the second player to be directly involved in three goals in a Copa del Rey final this century after Messi in 2018 (also one goal and two assists v Sevilla).

Athletic return to LaLiga action on Wednesday with a trip to Real Betis, while Barcelona host Getafe in the Spanish top flight the following day.