Real Madrid suffered an embarrassing Copa del Rey exit, letting slip a one-goal lead as they went down 2-1 to Alcoyano after extra time 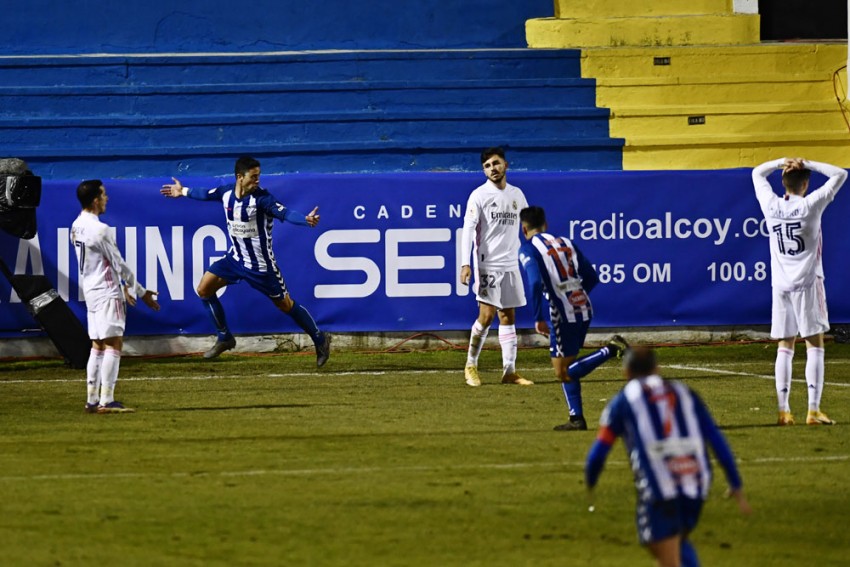 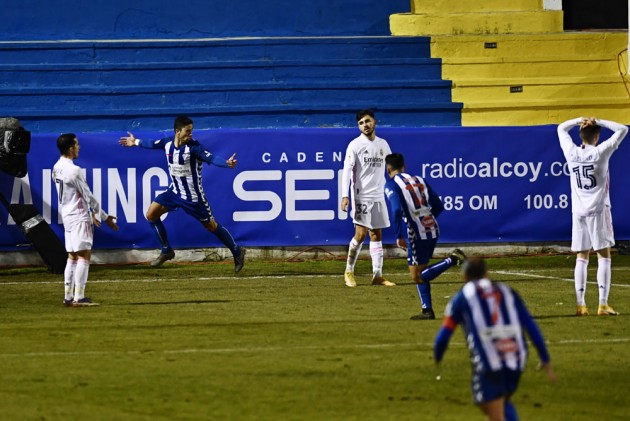 Zinedine Zidane's side had won just once in four outings going into the last-32 tie, including falling to a disappointing Supercopa de Espana semi-final exit to eventual winners Athletic Bilbao.

However, while that result was a setback, Madrid can expect to face a much more severe backlash after being on the wrong end of a famous upset at the tiny Estadio El Collao.

Eder Militao rewarded the visitors' dominance when heading his team in front on the stroke of half-time, yet Madrid failed to build on the centre-back's first goal for the club.

The hosts defended in stoic fashion to keep the gap down to one before grabbing an unlikely equaliser with 10 minutes remaining, Jose Solbes poking home from close range at a corner.

Alcoyano had Ramon Lopez sent off in the second period of extra time but the 10 men grabbed an unlikely winner through Juanan, who volleyed in Ali Diakite's cross in the 115th minute to seal a famous result.

1 - CD Alcoyano are the first lower league side to knock out Real Madrid in a Copa del Rey tie since Alcorcón in 2009 (excluding the defeat against Cádiz in 2015 for illegal lineup). Surprise. pic.twitter.com/1XX4AUWBhV

While the home side celebrated at the final whistle, Madrid were left to reflect on a disastrous outing that suggests their recent poor form is more than just a blip

Militao's header should have been the catalyst for a comfortable victory against third-tier opposition, yet they laboured in attack throughout, even with the introduction of Karim Benzema and Eden Hazard off the bench.

Alcoyano caught them out with a set-piece move to draw level and, just as penalties seemed set to decide the outcome, produced a clinical counter-attack in the closing stages to show their illustrious rivals how it should be done.

Diakite and Juanan combined in some neat build-up play before the latter reacted the quickest in the middle to settle the contest in favour of the underdogs.

What does it mean? ZZ tops out again in the cup

The Copa del Rey continues to cause issues for Zidane, who rested some of his regular starters but still picked a line-up with enough pedigree to prosper. Madrid had 73 per cent of possession and 26 shots, yet rarely looked like scoring more than their one goal.

The Frenchman has still never won the competition with Los Blancos, while the club last lifted the trophy back in 2014 when a sensational Gareth Bale goal secured a 2-1 victory over rivals Barcelona.

Despite no crowd present inside the ground to urge them on, Alcoyano followed the lead set by fellow giant-killers Cornella, who had knocked out Atletico Madrid in the previous round.

With Benzema given a well-earned break, Mariano had the chance to show Zidane what he can offer. However, the forward had one shot and just 17 touches before making way in the 67th minute.

His most notable contribution to proceedings was a yellow card for one of the five fouls he conceded.

Madrid must move on quickly as they return to LaLiga duties on Saturday, travelling to Deportivo Alaves. As for Alcoyano, they will wait to find out who they will face in the next round when the last-16 draw takes place on Friday.