India inflicted a 318-run defeat on West Indies in the first Test at Antigua as Jasprit Bumrah dismantled the hosts with a five-for after Ajinkya Rahane hit his first century in two years. 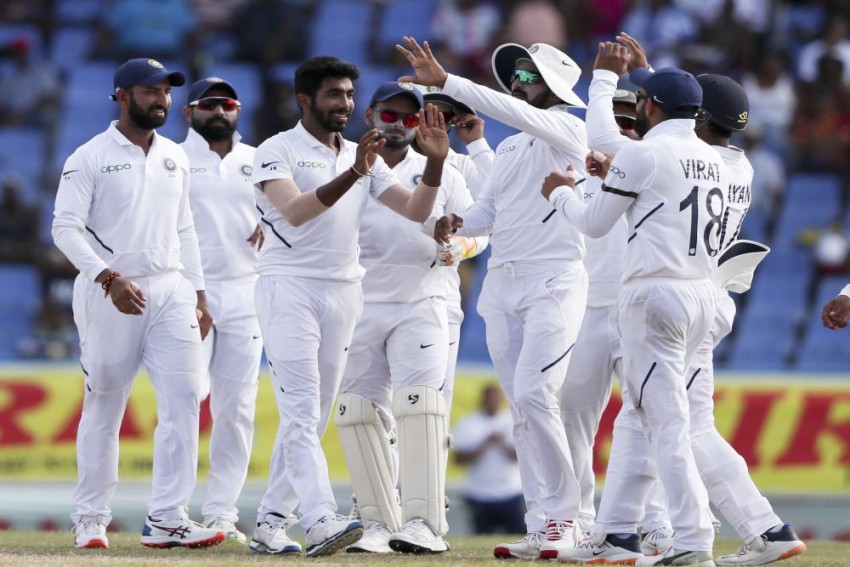 Jasprit Bumrah is congratulated by teammates after taking the wicket of Jason Holder during the fourth day of the first Test between West Indies and India at North Sound, Antigua on Sunday (August 25).
AP
Stats Perform 2019-08-26T07:41:41+05:30 Ajinkya Rahane And Jasprit Bumrah Torment West Indies As India Seal First Test In Clinical Fashion 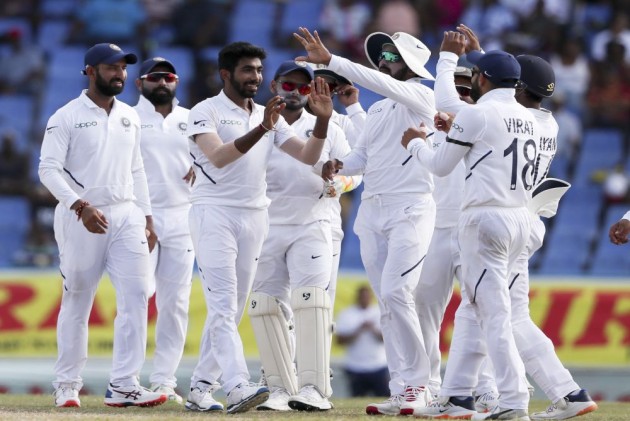 Middle-order batsman Rahane turned an overnight 53 into 102 for a 10th Test century and a first three-figure score in five-day cricket since August 2017. (CRICKET NEWS)

Hanuma Vihari fell seven runs shy of a first Test century as India declared on 343-7 in their second innings to set the Windies a daunting 419 target on Day 4 at North Sound, Antigua.

It was a score they would never get close to threatening, the excellent Bumrah finishing with eye-watering figures of 5-7 from eight overs, while Ishant Sharma (3-31) also ripped through the order as West Indies were skittled for 100.

After slipping to 15-5 by tea, limited resistance arrived in the form of Kemar Roach (38) but the Windies were only delaying the inevitable.

The fourth day did not start particularly brightly for India as captain Virat Kohli failed to build on his overnight 51, an edge off Roston Chase taken by John Campbell at extra cover.

Rahane, who made 81 in the first innings, was rewarded for showing poise and patience, as his 102 came from 242 balls with five boundaries before a toe-ender off Shannon Gabriel to mid-off yielded an easy catch for Jason Holder.

Vihari was the aggressor in his century stand with Rahane, making 80 of their 135 runs, and India held off on the declaration until he gloved Holder behind.

The Windies had an arduous 40 minutes before tea, with Bumrah and Sharma wreaking havoc with the new ball.

Kraigg Brathwaite had already prodded Bumrah behind by the time the bowler emphatically knocked Campbell's stumps over when the opener attempted to drive him through the covers.

Sharma had Shamarh Brooks pinged leg before and also accounted for Shimron Hetmyer before Bumrah smashed Darren Bravo's off stump.

There was little reprieve in the final session as Bumrah completed his haul by adding the wickets of Shai Hope and Holder and, despite a last-wicket stand of 50 between Roach and Miguel Cummins (19no), India saw off the hosts with relative ease.