Achraf Hakimi To PSG? Numbers Which Point To A Smart Move For Ligue 1 Giants

Achraf Hakimi is rumoured to be on the verge of a move to Paris Saint-Germain, with reports from France claiming personal terms have already been agreed

Achraf Hakimi is rumoured to be on the verge of a move to Paris Saint-Germain, with reports from France claiming personal terms have already been agreed. (More Football News)

Following an impressive loan spell at Borussia Dortmund, Hakimi sealed a permanent switch from Real Madrid to Inter in 2020, for a reported €40million.

Hakimi played in 37 of Inter's 38 Serie A fixtures as the Nerazzurri clinched their first Scudetto crown since 2010, making 29 starts. Only Lautaro Martinez (38) featured in more top-flight games for Inter in 2020-21.

He scored seven league goals, including a double against Bologna in December, a total only bettered in Inter's ranks by Martinez (17) and Romelu Lukaku (24), as well as laying on a further eight assists.

The 22-year-old will no doubt be missed by Inter, but the club need to sell, with reports suggesting they must raise up to €100million in transfer fees to help balance their books.

Using Opta data, we look at what he will offer PSG should the move come off. 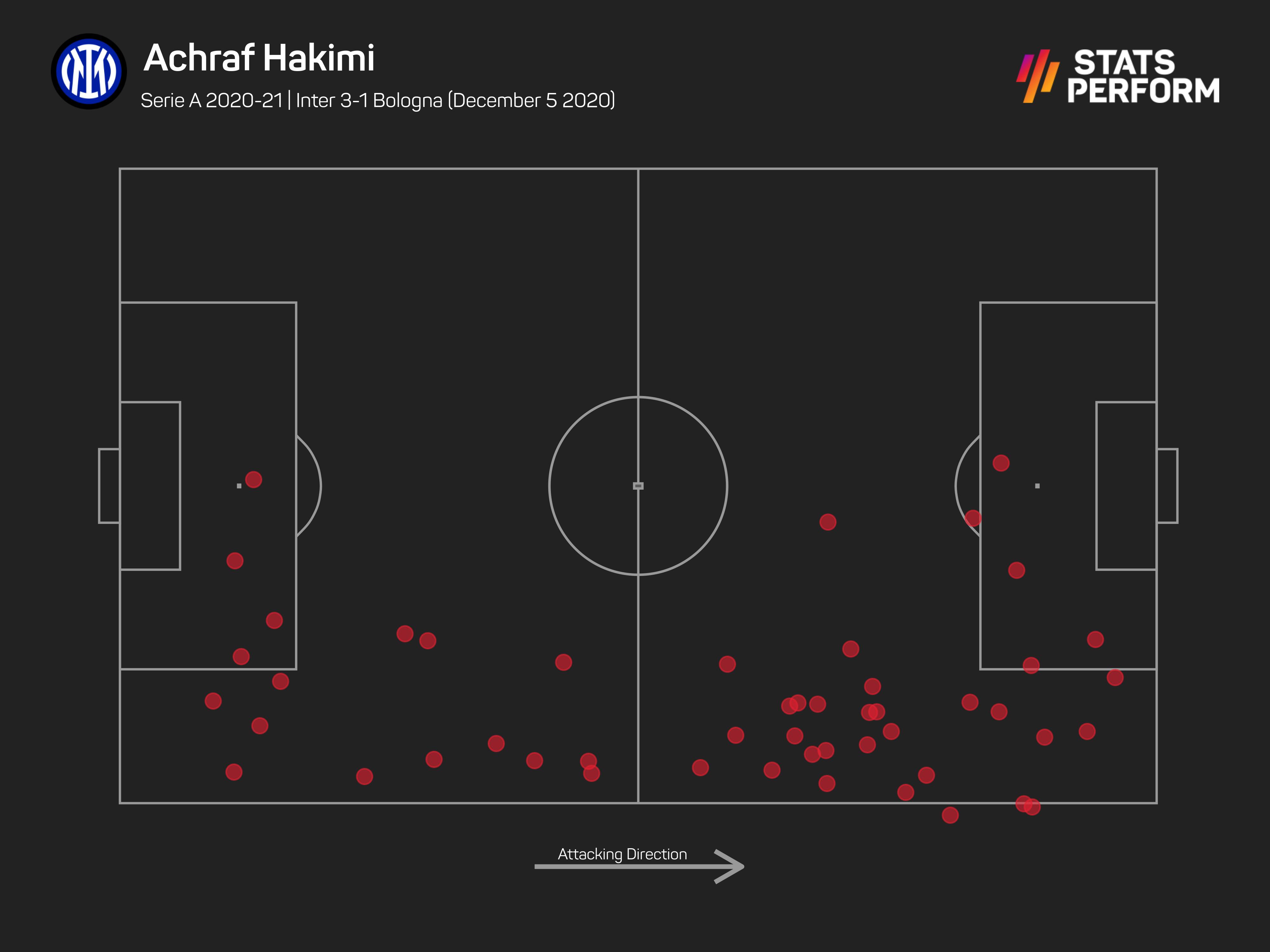 ATTACK THE BEST FORM OF DEFENCE

It was at Dortmund that Spain-born Morocco international Hakimi found his role as a right wing-back, and it was a logical move for Inter to bring in the youngster, given Antonio Conte's preference for a 3-5-2 system.

The move paid off. Hakimi played 3,216 minutes across 45 appearances in all competitions, and by early February had been directly involved in 10 Serie A goals, becoming the first defender to do so in Europe's top five leagues in 2020-21. Maicon – in 2009-10 – was the last Inter defender to score at least six league goals.

He created 46 opportunities, with all but one from open play, while his tally of 12 big chances crafted is a joint team-high alongside Ivan Perisic. Hakimi also delivered 145 crosses from open play, 17 more than any other Inter player, recording an accuracy of 25.52 per cent.

Hakimi is more renowned for his attacking, but helped Inter to eight clean sheets in total – of defenders, Milan Skriniar, Stefan de Vrij (both 14) and Alessandro Bastoni (15), were involved in more.

Indeed, Hakimi's tally of 38 successful tackles is a higher total than any of his fellow defensive team-mates managed.

Hakimi's ball-carrying ability is another major facet of his play. Over 370 carries, he progressed the ball 4,609 metres, at an average of 12.46m.

Sixteen of the carries resulted in a shot, and of all of the full-backs in Europe's top five leagues, Hakimi is top for carries with goals and assists (four and five respectively). 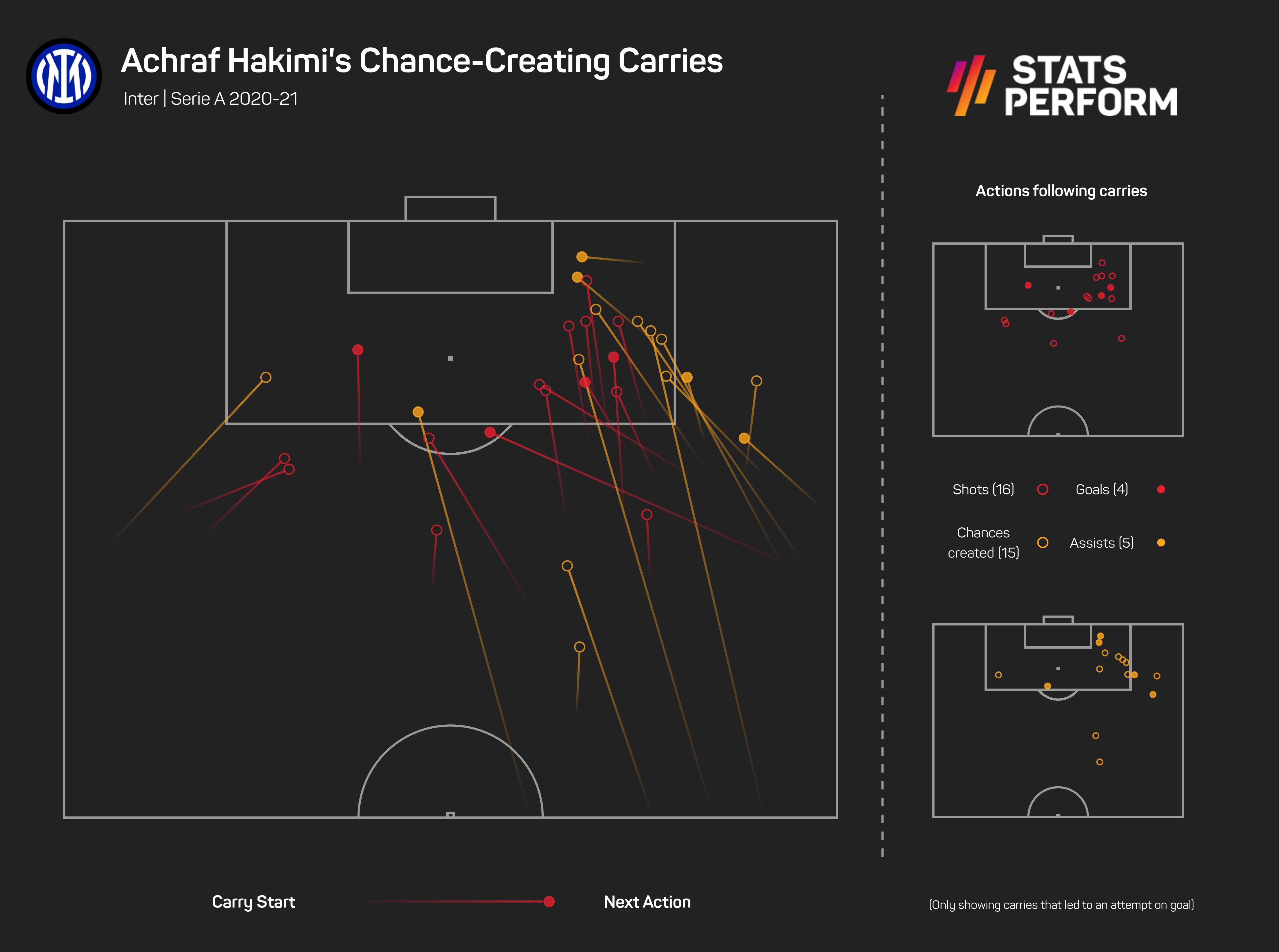 Hakimi's preference to play as a wing-back means PSG may well have to switch to a system which incorporates such a role to get the best out of him.

PSG are in need of a right-back, though. Alessandro Florenzi was loaned in from Roma for 2020-21, while Colin Dagba and Thilo Kehrer – a centre-back by trade – are Mauricio Pochettino's other options.

None can be described as in the same class as Hakimi. He created 22 more chances than Florenzi, albeit having played nine games more than the Italy international, while Dabga and Kehrer only managed 12 and four respectively.

From 333 duels in total, Hakimi won 168. Kehrer, Florenzi and Dagba won 91, 82 and 57, and the former Madrid man would no doubt present a significant upgrade to PSG's armoury.