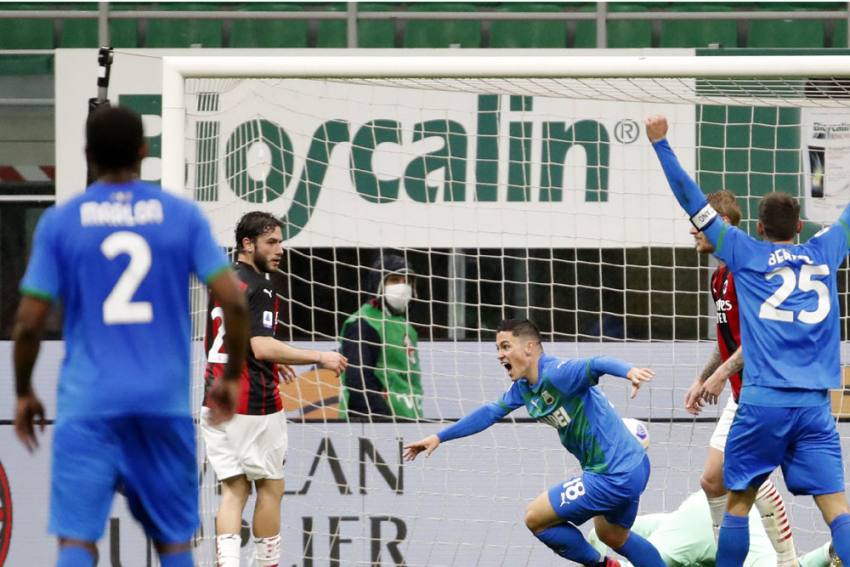 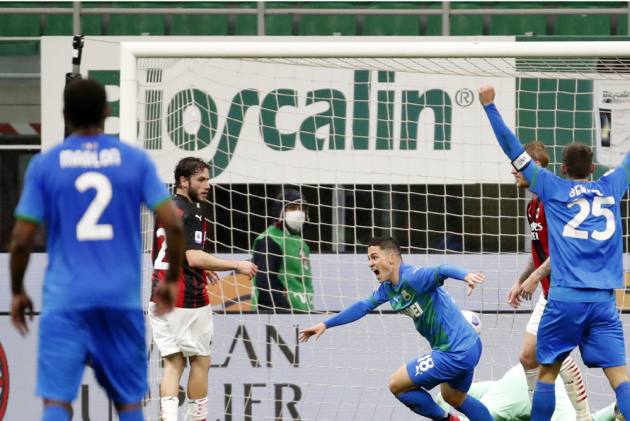 Milan's hopes of Champions League were qualification were hit by a 2-1 home defeat to Sassuolo in their first match since playing a part in European football's remarkable Super League saga. (More Football News)

The Rossoneri were among 12 elite clubs signed up to play in a controversial new continental competition until England's 'big six' backed out on Tuesday and prompted its collapse.

Milan have not played in the Champions League - the tournament the lucrative Super League sought to rival - since 2013-14 and have work to do to clinch the top-four finish that would end that wait, barring any UEFA sanctions.

Substitute Giacomo Raspadori's quickfire late double, after a superb Hakan Calhanoglu opener, leaves the second-placed side still well within reach for Napoli in fifth, six points ahead but with a game in hand to come for the Partenopei.

Milan only confirmed their own withdrawal from the breakaway competition five hours before kick-off and they were then a little slow to get going at San Siro, grateful to goalkeeper Gianluigi Donnarumma when he blocked from Jeremie Boga, who had sold Fikayo Tomori with a dummy.

Calhanoglu supplied the breakthrough strike on the half-hour, though, as he shaped a gorgeous finish into the top-right corner from the left side of the penalty area.

Sassuolo keeper Andrea Consigli repelled fierce drives from Alexis Saelemaekers and Calhanoglu following the interval, before an inspired substitution turned the game on its head.

Raspadori was introduced on 64 minutes and stabbed in the equaliser 12 minutes later, reacting fastest when Jeremy Toljan's shot was deflected into the middle of the six-yard box.

The 21-year-old forward only had to wait another seven minutes for his decisive second, turning away from Tomori in the area and finishing via the post.

Milan might have fallen further behind if not for Donnarumma, who saved from Lukas Haraslin and scooped clear the loose ball, but there was no reprieve for the Rossoneri as Raspadori, of all people, blocked Samu Castillejo's late indirect free-kick.