A decade ago this week, Spain were celebrating their first and only World Cup win, dazzling some spectators and irritating others 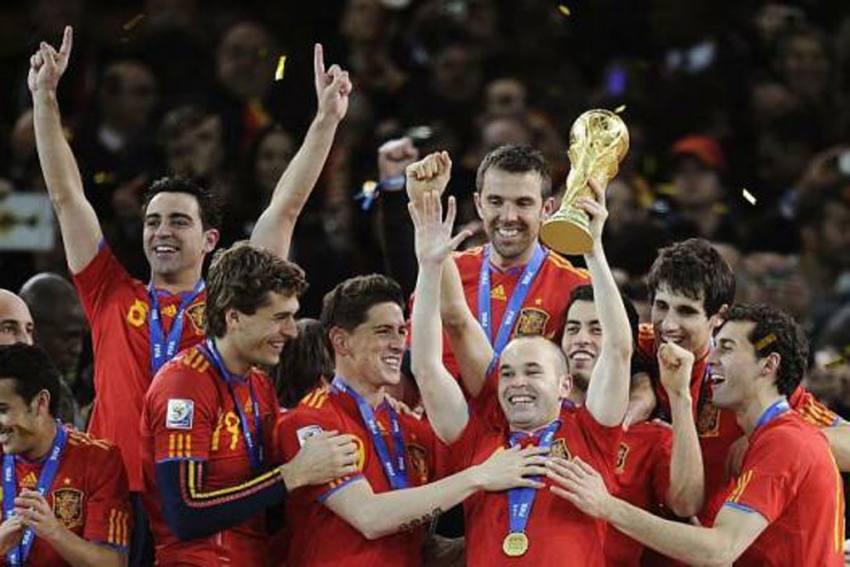 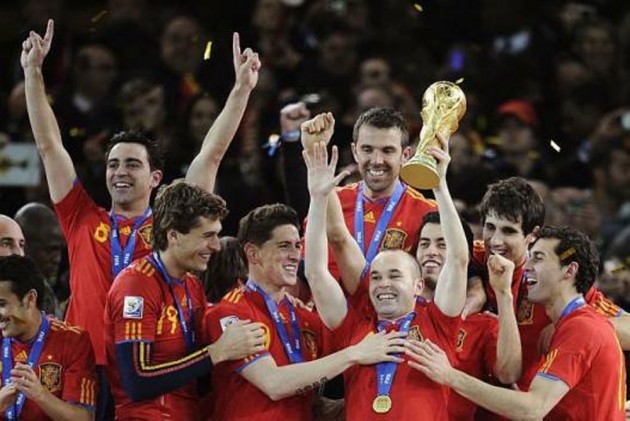 Xavi was still in his prime playing alongside a 26-year-old Andres Iniesta, and Vicente del Bosque had figured out a goal would do. (More Football News)

Sergio Ramos was 24 playing right back next to a 23-year-old Gerard Pique, and neither of them had much to do.

David Villa was 28, and a 24-year-old David Silva couldn't find a regular spot in the squad because the 2010 Spanish midfield just didn’t need him. What they did need was 745.8 touches per goal.

It's an illogical comparison between an entire team and a single striker, but it's also an amusing one: Miroslav Klose needed 728 career touches to score 16 World Cup goals.

La Roja scored eight in South Africa, the fewest by a World Cup winner, from 5,966 touches, the most by any team in the World Cup dating to 1966, when advanced data records began. To some, they were untouchable, dominant and – time for a new word – undispossessable. To others, simply frustrating.

READ: Andres Iniesta At 36 - Ten Of The Barcelona And Spain Great's Best Moments

But they were very good. Aside from a moment in which Arjen Robben got behind the defence after a beautiful through ball from Wesley Sneijder only for Spain goalkeeper Iker Casillas to get a foot on his shot, it's hard to recall many times in the tournament when viewers thought the then and future European Champions could lose – until we're reminded they lost their World Cup 2010 opener to Switzerland.

POSSESSION, AND THE OCCASIONAL GOAL

ALSO READ: Sergio Ramos Turns 34 - What Has The Real Madrid And Spain Star Achieved So Far?

A brutal final against the Netherlands which saw referee Howard Webb show 14 cards – a record for the World Cup final – couldn't prevent them from their emblematic scoreline: 1-0.

A 23-year-old Cesc Fabregas came on in the 87th minute to give a midfield fresh legs it probably didn't need before supplying a tournament-winning assist in extra time.

To hyperbolically state they had the ball the entire match, as we tend to do 10 years after, would be 38.4% inaccurate. Xavi completed 90 of 97 passes attempted and had 130 touches – the second-highest single-game total of the tournament. The two in their 4-2-3-1, Xabi Alonso and Sergio Busquets, combined for 166 touches. They were never dispossessed. 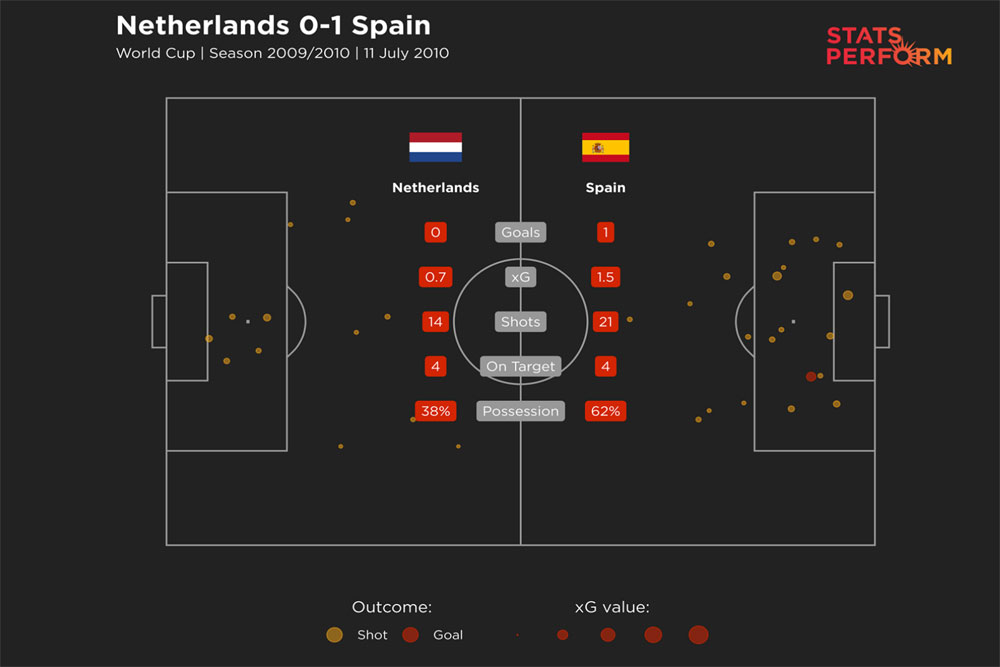 La Roja 2010 completed more passes in a World Cup than any team until Germany topped them by six four years later, yet overwhelming possession is always how Spain will be remembered.

Possession percentage may not mean much – France had the ball 48.6% of the time in 2018 – but we can't seem to talk about this Spain side without reiterating how much they had the ball.

With those eight 2010 goals came an 8.90 xG, marking the first negative xG differential by a World Cup winner. It didn't help that they missed both penalties they were awarded.

It wasn't a matter of progressing the ball up the pitch or settling for inconsequential maintenance style possession at the back. Spain's touches in the opposition box (215) rank third dating to 1966 behind the Netherlands 1974 (260) and Germany 1974 (237), but those two sides combined for 28 goals.

It was even a mediocre scoring tournament across Spain's history. They’ve qualified for the last 11 World Cups. In that time, they've outscored the 2010 side four times and matched it once while never advancing past the quarter-finals or playing more than five matches.

So what, then, was it that made this team look so special so frequently and, more importantly, what made it possible for them to get it together after their opening loss to Switzerland to advance to the knockout stage and beat Portugal, Paraguay, Germany and the Dutch by a combined score of 4-0?

The answer may be that their possession often worked more as a method of defence than attack. We focus so often on recent Spanish teams' ability to sustain possession or threat, and as a result what can go unnoticed is where they stood defensively.

The right side of the defence (Ramos and Pique) was young, and the left side was made up of 32-year-olds Carles Puyol and Joan Capdevila. Neither side was responsible for an overwhelming amount of their non-penalty opponent xG with 1.82 coming from sequences starting on the left and 1.52 coming from the right.

Measured by shot location, 1.47 came from left, while 1.87 came from the right. Regardless, they allowed one shot from inside the six for the tournament: 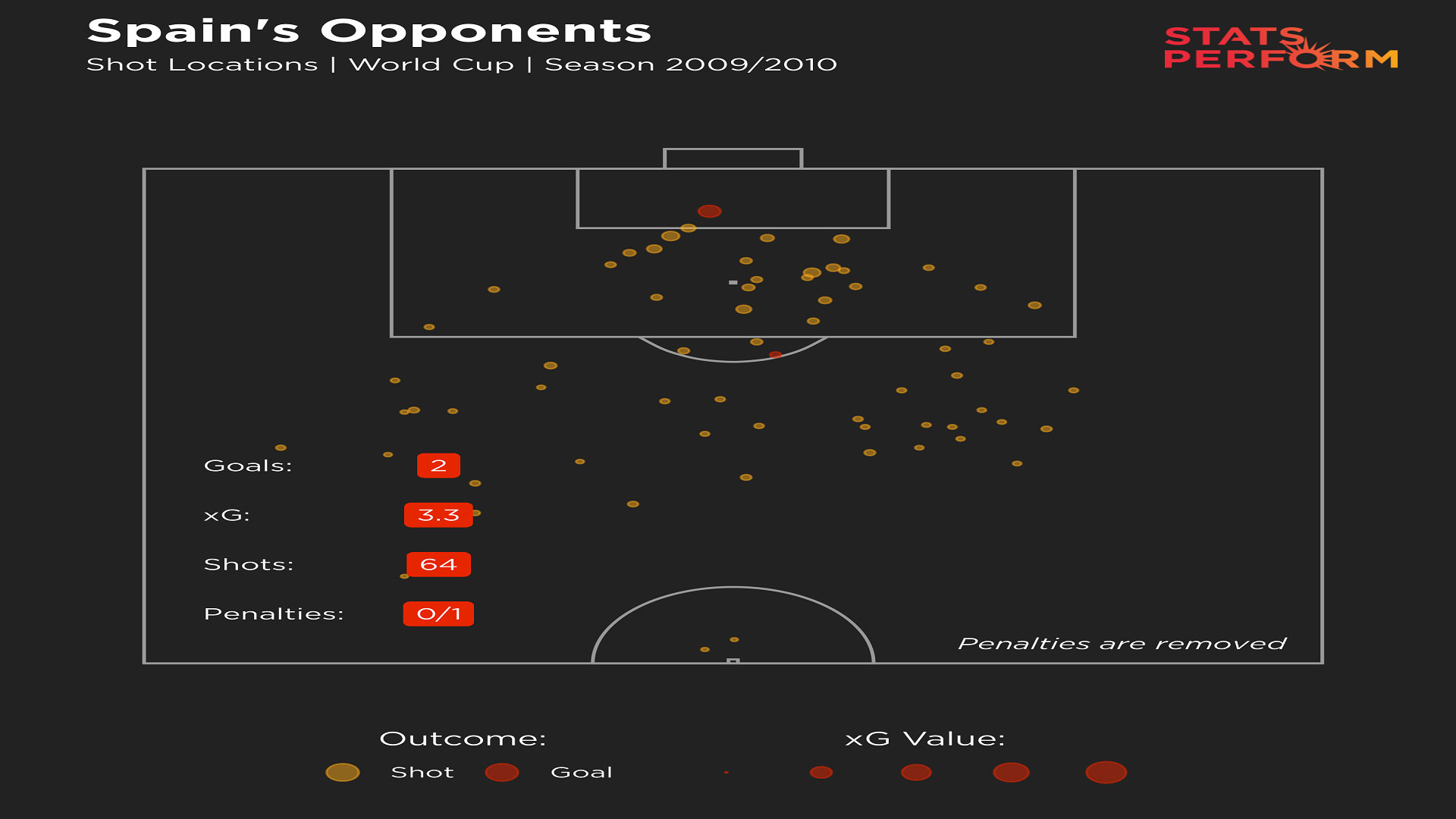 Meanwhile, Casillas ranked 29th in saves per 90 for the tournament (though he stopped the only penalty he faced to preserve a 1-0 quarter-final lead against Paraguay), while Spain's 17.3 tackles per 90 is the fifth-lowest total among all World Cup teams to play at least six matches, and their 104.2 duels per 90 is third lowest among World Cup winners.

So much of that had to do with retaining possession, which is why a player like Sergio Busquets fit so well as a holding midfielder for this team. He was and is a possession retainer, never to be confused with a ball winner behind the playmakers.

But there was also remarkable creativity. Spain 2010 attempted more through balls (60) than any World Cup team aside from Brazil in 1978 (69), and their pass completion percentage ending in the final third among teams to play at least six matches in a tournament ranks second to Brazil 1970.

Now, possession itself can be boring. But players involved in it are often not boring. Iniesta, for example, was never a boring player, particularly at the previously mentioned age. There’s something interesting to say about most of these guys, but we’ll focus on a handful.

Iniesta was undoubtedly the skilled midfielder in his prime that dynamised Spain's style, but he also scored some big goals. You know, the one in the 116th minute that won them the tournament and earned him man of the match. That was important.

But he also scored another one, which in hindsight really mattered. Iniesta gave Spain a 2-0 lead in the 37th minute of Spain's final group play match, a 2-1 win over Chile in which he was also named man of the match.

Without that goal, Chile would have won the group, and Spain would have played Brazil rather than Portugal in the round of 16, and this World Cup anniversary story might be about a different team.

Iniesta may have been the player on this team that made the detractors keep the television on. While fellow midfielders like Xavi, Busquets, Xabi Alonso looked to move the ball through team-mates, Iniesta took more chances on his own.

His 35 take-ons trailed only Messi's 45 for the tournament, and while his 48.6 take-on completion percentage was nowhere near Messi's 68.9, it compares favourably to the only other two players who attempted more than 30. Robben and David Villa each attempted 31 at 32.3%.

His 13 through balls played were second in the tournament only to the guy you'll read about last on this list. His two goals more than doubled his 0.77 xG, and without him or David Villa on this list, Spain realistically wouldn't have had the finishing to win a World Cup.

Playing striker with this bunch couldn’t have been a dream job. With persistent possession and plenty of defensive clutter behind the ball to navigate with back to goal, there wasn't much space for a No. 9 to do his thing. But Villa was used to it while playing at Barcelona with much of the Spanish midfield, and he managed to outperform his xG by 2.18 goals, which ranked sixth in 2010.

In 2010, he scored five of Spain's eight goals, and that 62.5% individual share of team goals is the highest all-time for a World Cup winner. It would have been six of nine if he'd converted a rather meaningless penalty against Honduras. 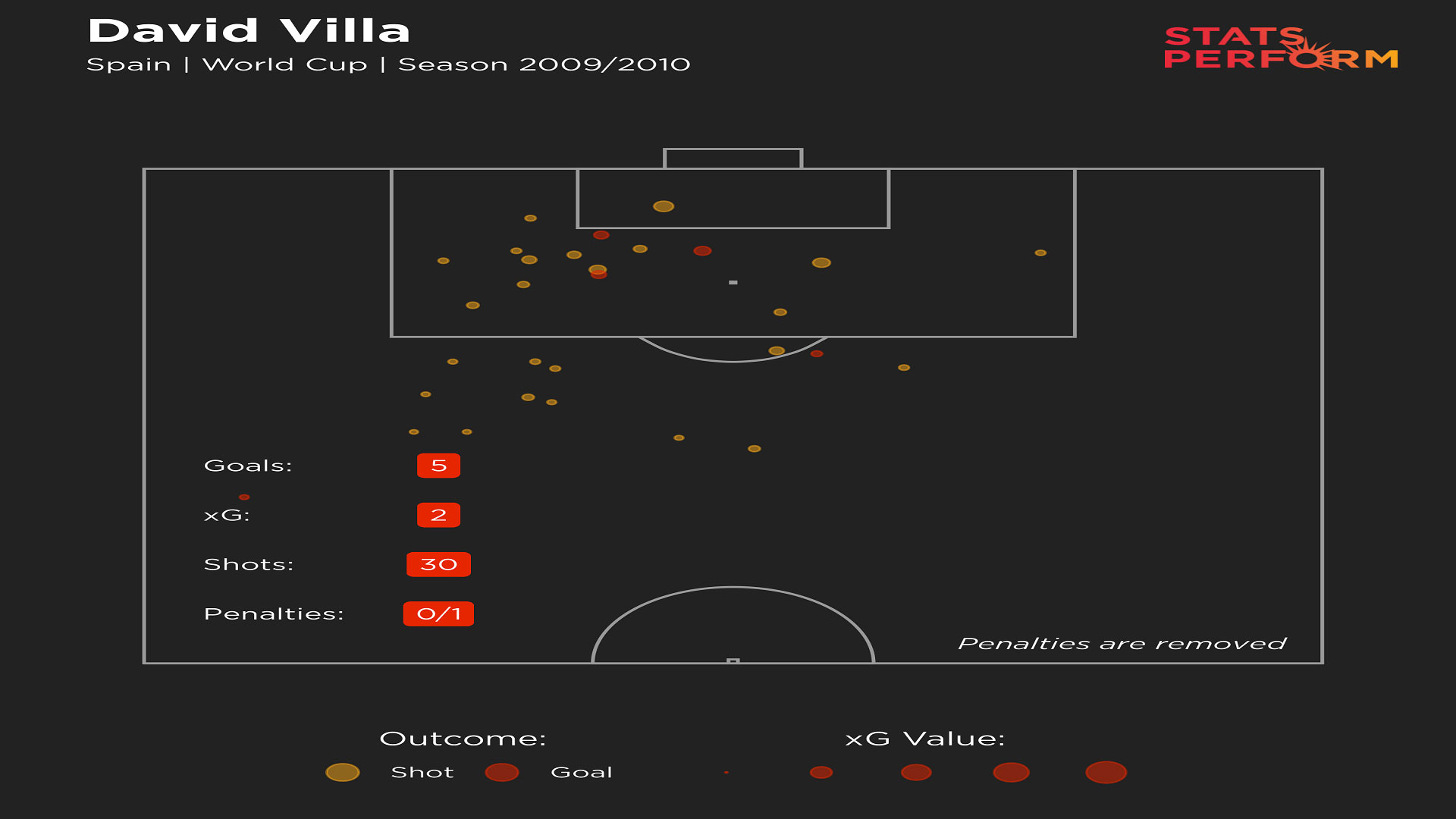 This author may have a tendency to argue Busquets has been one of football's most fortunate midfielders given the team-mates he's had who have hidden his lack of athleticism and allowed him to do exactly what he's good at and nothing more. But man is he good at what he's good at, even if it only occasionally requires a sweat.

Additionally, he made a team-high 27 interceptions and had a 61.3% tackle rate, which considering his lack of range are sneaky numbers to anyone used to watching him at 31 rather than 21. In fact, his 3.9 interceptions per 90 were fourth among all central, attacking or holding midfielders to reach the knockout phase. These are numbers we typically expect of a holding midfielder, but not necessarily one of Busquets' variety.

Busquets was dispossessed three times in 631 minutes in 2010, which at least in part explains that Del Bosque quote you may have come across when googling his age for this story: "If you watch the whole game, you won’t see Busquets. But watch Busquets, and you will see the whole game."

That's what he's good at, but he wouldn't have been as good at it if he'd had to worry about Xavi losing the ball up in front of him.

Saving the best for last, Xavi assisted the 73rd-minute semi-final winner against Germany – a match in which he created seven chances to Germany's three while completing 105 of his 113 passes.

His 30 chances created were a tournament best regardless of whether you measure it by total or per 90, and he created 10 more than next-best Mesut Ozil. Xavi accounted for 20 of Spain's throughballs, also a tournament best ahead of Ozil's 17.

And then there's everything about Xavi that made Spain Spain at their peak.

His 84.2% passing accuracy ending in the final third is unmatched among all players in that group. And for anyone clinging exclusively to this midfield being great at looking good while struggling to do much with it, Xavi was a part of a tournament-best 65 sequences ending in a shot. At a per-90 rate, his 9.2 trailed only Argentina's Lionel Messi and Brazil's Dani Alves and Felipe Melo.

Spain managed 17.2 such sequences per match, and for the sake of comparison, Busquets (4.1) and Iniesta (6.1) barely add up to more sequences ending in shots per 90 than Xavi.

He wasn't just a key part of sequences leading to attempts on goal. He was also reliable with the ball while repeatedly receiving it in advanced and contested positions, which was absolutely key for Spain sustaining threat and limiting counters.

His 568 passes received in 2010 are the most by a player in a single World Cup. Now, that doesn't mean much if he's constantly receiving the ball in harmless positions. But Xavi was one of six players in the tournament with an average sequence starting location at least 52 metres from goal, yet he was dispossessed 14 times.

That works out to 40.6 passes received per dispossession. The other five – Messi, Sneijder, Landon Donovan, Diego Forlan and Simone Pepe – had a combined average of less than half that (19.9).

That’s Spain 2010. For lack of a real word, undispossessable. Attack, defence and – yes – frustration rolled into one.

And it probably frustrated opponents far more than any neutral fans. Miroslav Klose happened to play 90 minutes against Spain in the 2010 semi-final. He of course didn't score, and the 23 touches he had were his fewest ever on a per-90 level in a World Cup match.

This story was originally published by Stats Perform. For more like this, sign up for The Analyst newsletter at statsperform.com/resources