'Sabarimala Issue Our Agenda, A Golden Opportunity For Us': Row Over Kerala BJP Chief's Video

Sreedharan Pillai also claimed that Sabarimala tantri's threat to shut the temple had come after Pillai gave him an assurance that tantri wouldn't be alone in this. 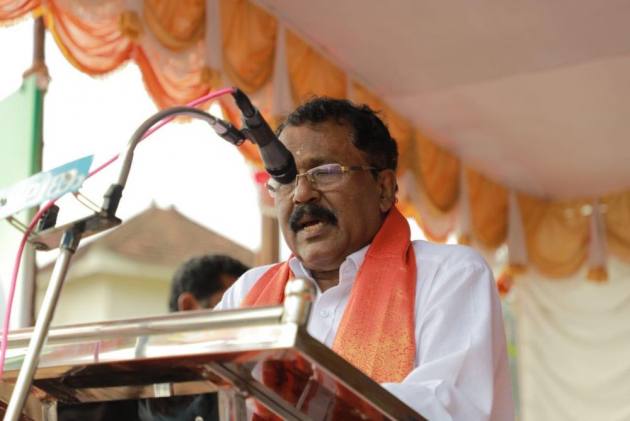 Bharatiya Janata Party’s Kerala state president P S Sreedharan Pillai has courted controversy after his speech at a Yuva Morcha meeting was aired by a local television channel in which he claimed that Sabarimala issue was a “BJP agenda” and a “golden opportunity” for the party.

In his speech, Pillai also claimed that Sabarimala tantri’s open statement that he would shut the temple if women of barred age group attempted to enter the shrine was a result of an assurance given to him by the BJP president.

According to the report by Manorama TV, Pillai said that during the Sabarimala agitation the tantri had asked him whether shutting down the temple would be a case of contempt of court. Pillai claimed that he then assured the tantri that it wouldn't be a contemp of court and that he wouldn’t be alone in this.

He also said that now it has become a fight between the BJP and the ruling party, leaving others aside.

He also said that it was the BJP who planned the protests at Sabarimala.

“It is a golden opportunity for us. We put an agenda forward. Others fell in line after it one by one. At the end, only us, the government and the ruling party remain,” he said.

“I had spoken to the tantri on phone when women were nearing the temple… He was upset. He asked me whether it would be contempt of court to shut down the temple. Police had frightened him. I told him, Thirumeni, you are not alone. It won’t amount to contempt of court. If they are filing a contempt of court case, we would be the first ones to face it. There will be thousands of people. You won’t be alone. When I said this, the tantri took a strong decision. It was this decision that put the police and the government in a tricky position. We hope he will do the same again today,” said Pillai.

The Sabarimala Temple, and its surrounding areas, witnessed a series of protests in October over the apex court's decision to quash restrictions on the entry of women between the ages of 10 and 50 into the holy shrine. However, in spite of the top court's order no women in menstruating ages were able to enter the sanctum sanctorum of the temple when it opened last time.

More than 3000 protesters have been arrested so far for instigating the violence that broke out in the state, while around 529 cases have been registered.