Top Congress leaders took part in the march that culminated in a demonstration outside the CBI headquarters. Leaders of other parties also joined the protest as a mark of solidarity. 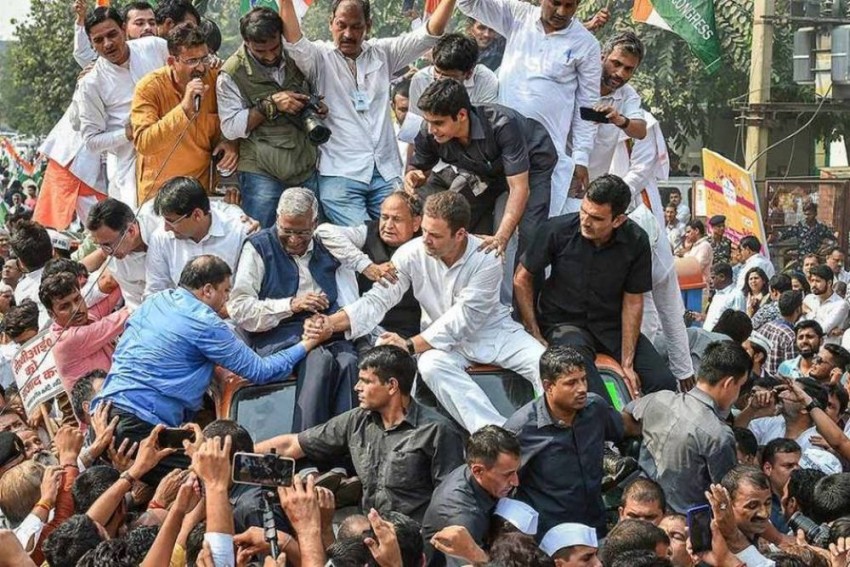 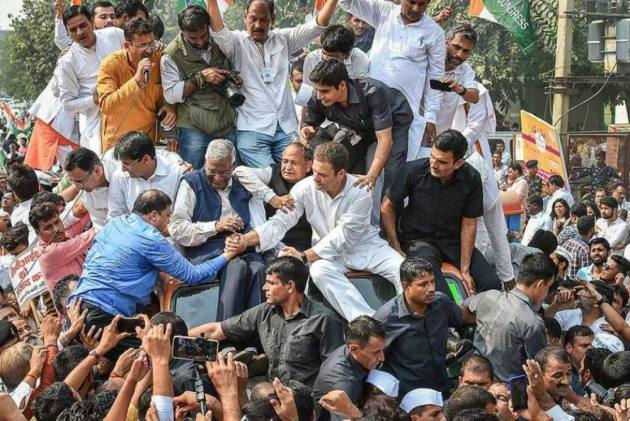 Taking to the streets, the Congress on Friday took out nationwide protest marches to CBI offices accusing the government of trying to 'cage the CBI', as the party president Rahul Gandhi, along with several others, courted arrest and alleged "every institution was being ruined" in the country.

While Gandhi led hundreds of Congress workers and leaders on their protest march here, he was also joined by leaders from some other opposition parties as well, including from the CPI, Trinamool Congress and Loktantrik Janata Dal.

Similar marches were taken out by the Congress in Patna, Hyderabad, Gandhinagar (Gujarat), Mumbai, Bengaluru, Bhubaneshwar, Chandigarh and Hyderabad, among other cities. While police briefly detained the protesters at several places and released them later, there were no report of any violence.

In Chandigarh, police said they had to use water cannons against the agitators and also suspend traffic for some time around the area of protest. Traffic was impacted for some time in the national capital also on a few stretches.

Amid tight security arrangements by the police and with a large number of camerapersons jostling to record the protests, protesters moved on shouting slogans and carrying placards alleging the government of trying to 'cage the CBI'.

The Congress has alleged Rafale link in the government decision to divest CBI Director Verma of his duties, but the government has rejected these allegations.

The nationwide protests by Congress took place on a day when the Supreme Court ordered completion of a CVC probe, under supervision of a retired judge, into allegations against the top CBI officials within two weeks.

While Gandhi refused to comment on the court order, saying that the process is "carrying on", Finance Minister Arun Jaitley welcomed the order and said the government has no interest for or against any individual and is keen only on maintaining institutional integrity of the investigative agency.

Gandhi, who led the nearly one-kilometre protest march of hundreds of Congress workers from Dala Singh College to the CBI headquarters in the national capital, also tweeted pictures of the protest march and him sitting at the Lodhi Road police station and said, "No matter how hard the government tries, it will not be able to cage the truth."

A police officer said 130 protesters including Gandhi and other Congress leaders such as Ashok Gehlot and Bhupinder Hooda were detained and released after 30 minutes.

Asserting that people are coming on the streets to show Prime Minister Narendra Modi "the mirror of reality", Gandhi lashed out at the government alleging that Modi "stole" money from the country and can run but not hide from the truth.

There were no immediate reactions from the Prime Minister's Office on Gandhi's allegations. While Ambani has been consistently denying the allegations, the BJP has accused Gandhi of manufacturing lies every day on the Rafale deal.

Asked about the commotion during his arrest, Gandhi said, "You can push me or arrest me as many times but I do not care." At one point, he even got onto a truck in front of the police barricades put up ahead of the CBI headquarters to prevent the marchers from reaching the building.

The Congress leader alleged the Modi government of destroying institutions like the CBI, the Election Commission and the Enforcement Directorate.

"Every institution in India being ruined by the prime minister," he alleged.

Joining Gandhi in the protest, Gehlot said the decision to remove the CBI director was "illegal" and such a decision can only be taken together by the chief justice of India, the leader of the opposition and the prime minister.

Replicating the Delhi protests, Congress workers, including scores of women, in Patna sat on a dharna outside the CBI office, carrying placards that read, 'Save CBI, Save Democracy'.

In Mumbai, city Congress president Sanjay Nirupam led the protest and accused
Prime Minister Modi of "removing" Verma "illegally and by going against the Constitution".

Over 40 Congress workers and leaders from Gujarat, including eight MLAs and a former state unit chief, were detained during their protest outside the CBI office in Gandhinagar. They were released later, the police said.

In Bengaluru also, the Congress workers protested in front of the CBI office, but several party MLAs and corporators were absent. While the party's national general secretary and Karnataka in-charge K C Venugopal participated in the protest, party spokesperson Subhash Agarwal said the presence of MLAs and corpororators did not matter much as it was a symbolic agitation.

Former chief minister Siddaramaiah took to Twitter to target the prime minister over the CBI issue.

In Tamil Nadu and Puducherry, demonstrations were held in front of central government offices. In Bhunaneshwar, hundreds of Congress workers, wearing black T-shirts, tried to enter the CBI office, but were stopped by the security personnel at the gate.