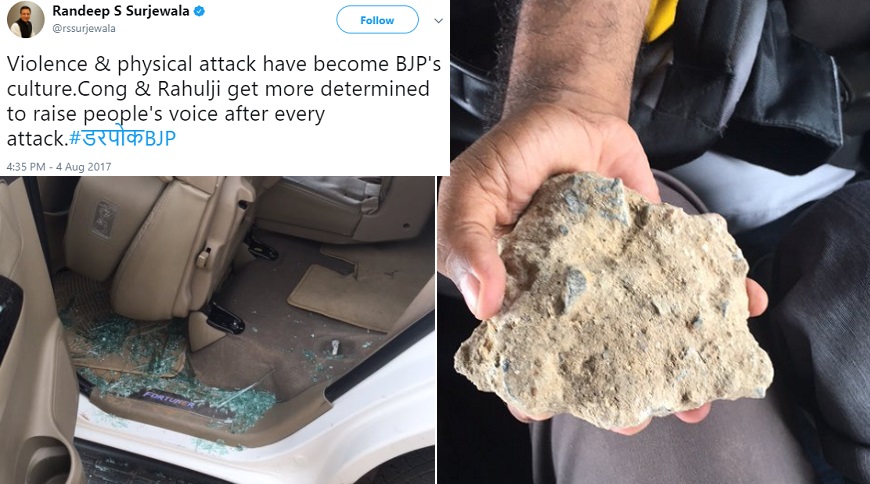 "Won't step back because of black flags, Narendra Modi slogans or stones," Gandhi said following the incident. Gujarat Deputy CM Nitin Patel said though that he refused a bullet-proof car for travelling and opted for a private car.

Congress MLA Randeep Surjewala took to Twitter to post the pictures of the  car that came under attack allegedly by BJP workers.

The Congress leader tweeted saying that security staff were injured during the incident.

Banaskantha Superintendent of Police Neeraj Badgujar said a man threw stones at Gandhi's car, breaking its rear glass when he was on his way from Lal Chowk to the helipad in Dhanera.

"We have detained the person who threw stones on the vehicle of Rahul Gandhi," Badgujar said.

Earlier, Rahul was heckled by protesters at an event.

He left the stage in a huff after making a brief speech in Lal Chowk area of the town in Banaskantha district after protesters showed black flags to him.

Some of the people gathered at the spot also raised slogans hailing Prime Minister Narendra Modi.

Notably, the Congress MLA from the area is in Bengaluru as part of the party legislators who have been flown to the southern city apparently to avoid being "poached" by the BJP ahead of the August 8 Rajya Sabha polls.

He said that several cars in the convoy were damaged, their window panes smashed and an SPG man suffered minor injury.

"All this because, the Congress Vice President went to a flood affected area," he said.

Aadhaar Number Mandatory For Registration Of Death From October 1