Over 820 Million People In The World Go Hungry Every Day. Can The Zero Hunger Target Be Reached By 2030?

In the second of a three-part series, we bring you ten key take-outs from the latest report by the FAO, IFAD, UNICEF, WFP and the WHO from the just-published “State of Food Security And Nutrition In The World.” 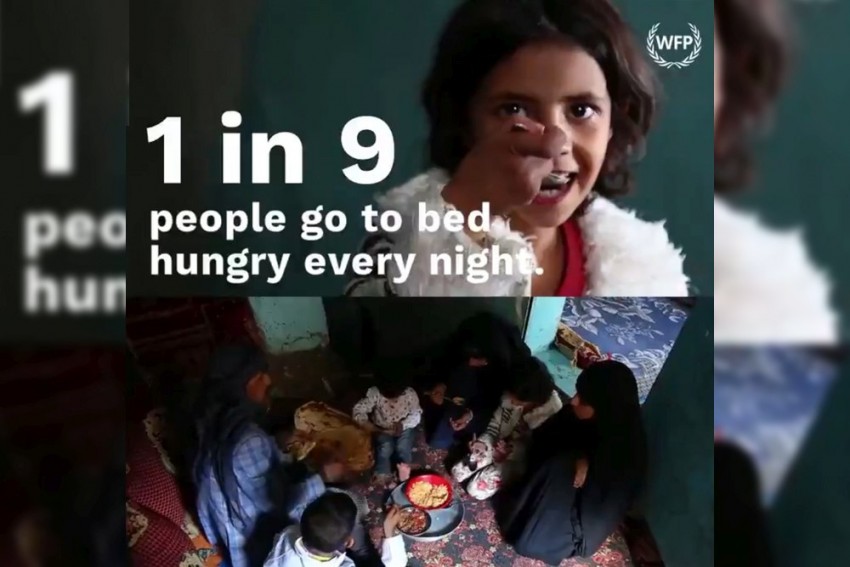 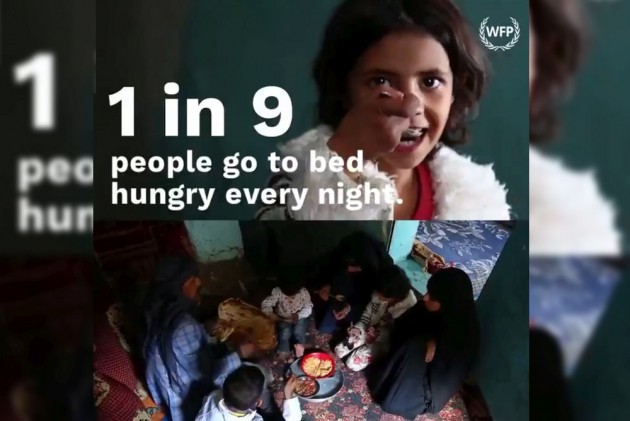 There are many people who, while not “hungry” in the sense that they suffer physical discomfort caused by severe lack of dietary energy, may still be food insecure. They have access to food to meet their energy requirements, yet are uncertain that it will last, and may be forced to reduce the quality and/or quantity of the food they eat in order to get by. This moderate level of severity of food insecurity can contribute to various forms of malnutrition and has serious consequences for health and well-being.

The UN member countries recognized the importance of going beyond hunger, when they set universal and ambitious targets for the 2030 Agenda for Sustainable Development. The “Zero Hunger” goal aims not simply to “eradicate hunger”, but also to “ensure access by all people [...] to safe, nutritious and sufficient food all year round” (SDG Target 2.1) and to “eradicate all forms of malnutrition” (SDG Target 2.2). For this reason, this report was renamed The State of Food Security and Nutrition in the World in 2017. Since then it has reported on nutrition indicators, in addition to food security indicators.

The number of people who suffer from hunger has gone up for the third year in a row. We're working towards #ZeroHunger across our planet, but we can't do it alone.

This year’s report brings new ways of thinking to bear on the latest trends in hunger, food insecurity, and various forms of malnutrition: global, regional and subregional. 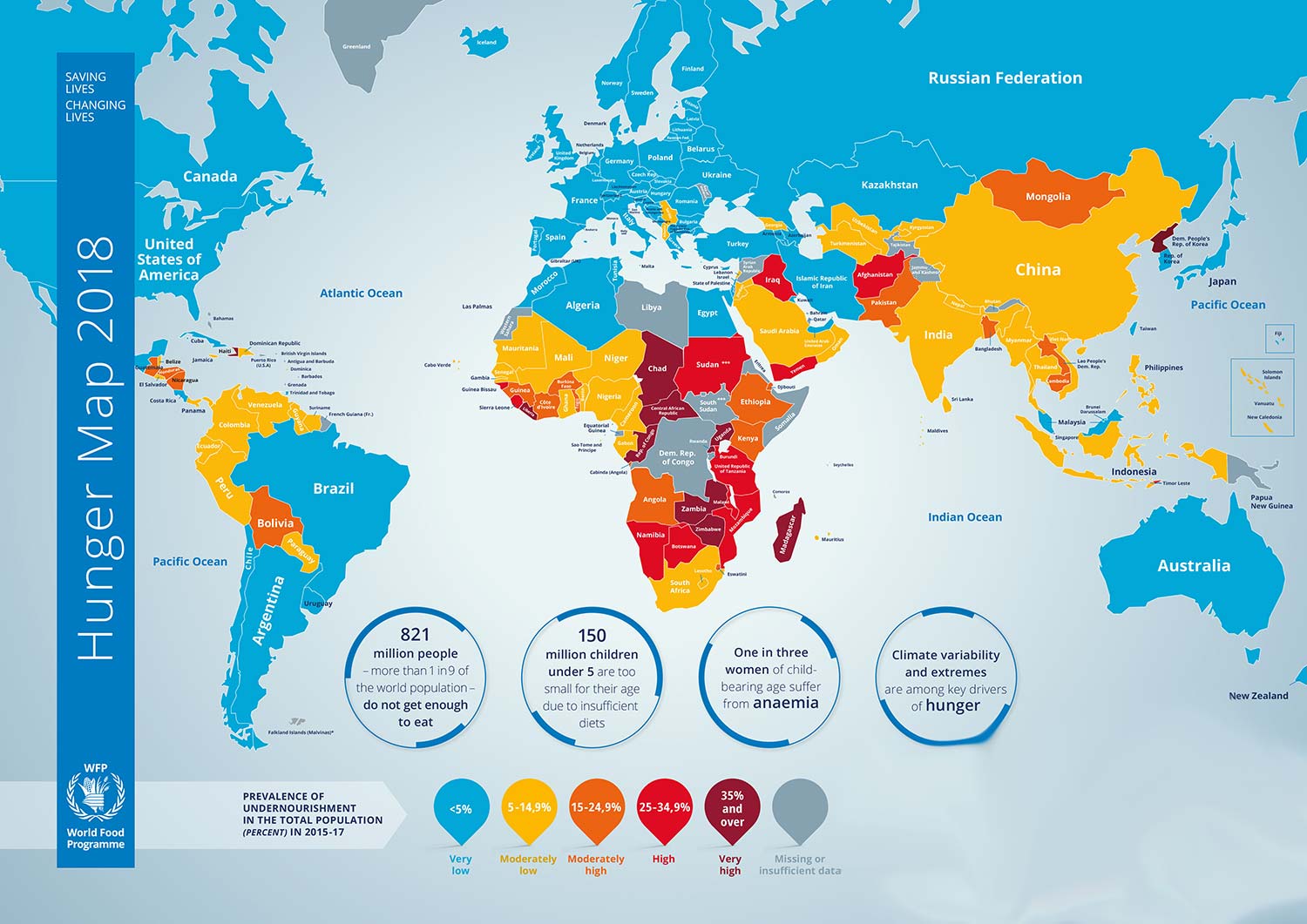 TRENDS IN HUNGER AND FOOD INSECURITY

After decades of steady decline, the trend in world hunger – as measured by the prevalence of undernourishment – reverted in 2015, remaining virtually unchanged in the past three years at a level slightly below 11 percent. Meanwhile, the number of people who suffer from hunger has slowly increased. As a result, more than 820 million people in the world were still hungry in 2018, underscoring the immense challenge of achieving the Zero Hunger target by 2030.

Hunger is on the rise in almost all African subregions, making Africa the region with the highest prevalence of undernourishment, at almost 20 percent. Hunger is also slowly rising in Latin America and the Caribbean, although its prevalence is still below 7 percent. In Asia, Western Asia shows a continuous increase since 2010, with more than 12 percent of its population undernourished today.

This year’s report introduces a second indicator for monitoring SDG Target 2.1: the Prevalence of Moderate or Severe Food Insecurity based on the Food Insecurity Experience Scale (FIES). While severe food insecurity is associated with the concept of hunger, people experiencing moderate food insecurity face uncertainties about their ability to obtain food, and have been forced to compromise on the quality and/or quantity of the food they consume.

1) Considering all people in the world affected by moderate levels of food insecurity together with those who suffer from hunger, it is estimated that over 2 billion people do not have regular access to safe, nutritious and sufficient food, including 8 percent of the population in Northern America and Europe.

2) One in seven newborns, or 20.5 million babies globally, suffered from low birthweight in 2015; no progress has been made in reducing low birthweight since 2012. The number of children under five years in the world affected by stunting, by contrast, has decreased by 10 percent in the past six years. However, with 149 million children still stunted, the pace of progress is too slow to meet the 2030 target of halving the number of stunted children.

4) The economic costs of malnutrition are staggering. Analysis of household and individual level data from selected countries across all regions shows that food insecurity plays an important role as a determinant of many different forms of malnutrition. In upper-middle- and high-income countries in particular, living in a food-insecure household is a predictor of obesity in school-age children, adolescents, and adults.

5) Previous editions of this report show how conflict and climate variability and extremes are exacerbating the above trends. This year the report shows that the uneven pace of economic recovery and continuing poor economic performance in many countries after the 2008–2009 global economic downturn are also undermining efforts to end hunger and malnutrition. Episodes of financial stress, elevated trade tensions and tightening financial conditions are contributing to uncertain global economic prospects.

6) Hunger has increased in many countries where the economy has slowed down or contracted, mostly in middle-income countries. Furthermore, economic shocks are contributing to prolonging and worsening the severity of food crises caused primarily by conflict and climate shocks.

7) Out of 65 countries where recent adverse impacts of economic slowdowns and downturns on food security and nutrition have been strongest, 52 countries rely heavily on primary commodity exports and/or imports.

8) Economic slowdowns or downturns disproportionally undermine food security and nutrition where inequalities are greater. Income inequality increases the likelihood of severe food insecurity, and this effect is 20 percent higher for low-income countries compared with middle- income countries. Income and wealth inequalities are also closely associated with undernutrition, while more complex inequality patterns are associated with obesity.

9) To safeguard food security and nutrition, it is critical to already have in place economic and social policies to counteract the effects of adverse economic cycles when they arrive, while avoiding cuts in essential services, such as health care and education, at all costs. In the longer term, however, this will only be possible through fostering pro-poor and inclusive structural transformation, particularly in countries that rely heavily on trade in primary commodities.

The Verdict Is Out From The Gods Of Nutrition: State of Food Security and Nutrition in the World, 2019