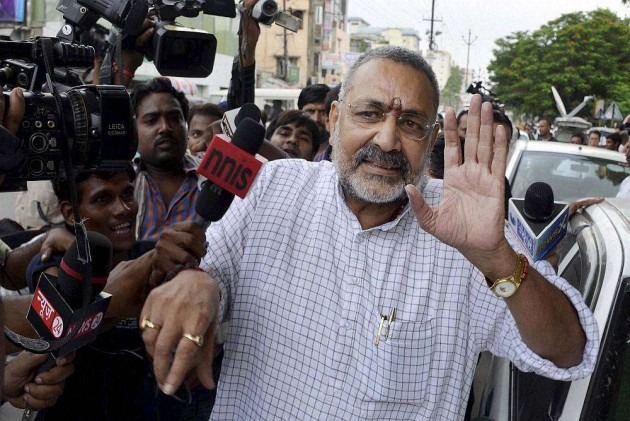 Union Minister Giriraj Singh on Sunday hit out at All India Majlis-e-Ittehadul Muslimeen (AIMIM) Chief Asaduddin Owaisi over his statement on Babri Masjid and said people like him are influenced by the "ghost of Muhammad Ali Jinnah" and wish to divide this nation.

Singh's statement came after Owaisi claimed that the Babri Masjid will be once again built in Ayodhya and the Supreme Court will give the decision in favour of Muslims.

"Muslims in India are neither descendants of Babur nor they are foreigners. They are the descendants of Lord Ram. We all have one predecessor although rituals of worship may be different. But, the ghost of Muhammad Ali Jinnah has entered into the hearts of people like Owaisi and therefore, they want to break his country. They will go to Mecca- Medina but where will we go? Will there be a Ram Temple built in Pakistan," he questioned.

Earlier on Saturday, Owaisi claimed that the Babri Masjid will be once again built in Ayodhya and the Supreme Court will give the decision in favour of Muslims.

Speaking at an event in Delhi, Asaduddin Owaisi said, "Our Masjid will remain there and we will reconstruct it once again as Supreme Court will give the decision in our favour ".

Owaisi further averred that the Muslims will never leave that space.

"The people who threaten Muslims to leave the Babri Masjid land and speak against our 'shariat'. I would like to tell them that we will never leave that space," Owaisi added.