Can It Also Be Seditious To Say 'America Zindabad'?

In the current political climate, claiming to love India with your life would not help your case if you have ever uttered positive words for Pakistan, let alone "Zindabad". 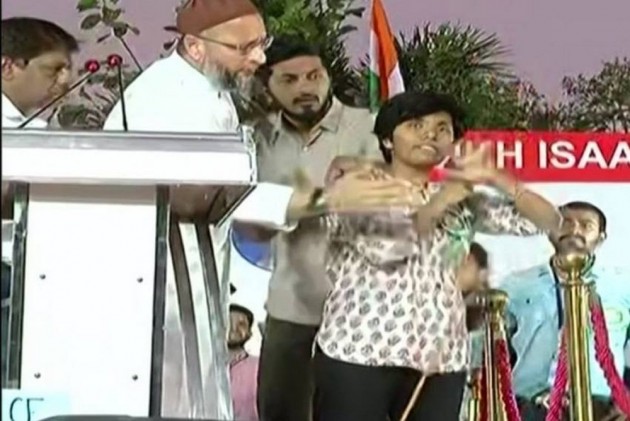 As India gets all ready to welcome US President Donald Trump with much fanfare, a worrisome thought looms large--what if a person overwhelmed by the hullabaloo ends up chanting 'America Zindabad'? We definitely don't want to put Mr Trump on a spot while the Indian government locks up the sloganeer for sedition.

Or, maybe, the rules are different for each country based on who the Indian government sees as its friend and its subjects must follow those boundaries. By that rule, the United States can be hailed and Trump can be worshipped like a god on the streets (this is not imagination, this has happened).

But you cannot go out on the street and declare even slight reverence for Pakistan or China. But especially Pakistan. Because in the current political climate, one's allegiance to India is decided based on the person's level of hatred for Pakistan. Claiming to love India with your life would not help your case if you have ever uttered positive words for Pakistan, let alone "Zindabad".

But a 19-year-old woman from Karnataka, Amulya Leona, did just that. She went to an anti-citizenship law protest in Bengaluru and raised the slogan "Pakistan Zindabad" along with "Hindustan Zindabad"; the latter was, of course, devoid of any significance because she has already uttered the seditious words--as soon as we hear those, we must turn into unwise version of Gandhi's monkeys and close our eyes and ears while the speaker is dragged into prison.

If the video of her speech, that has now gone viral, is seen carefully, she is seen trying to explain a difference between the two slogans--one is considered seditious and the other is an expression of nationalism.

Amulya was not allowed to finish her sentence or make her point as she was dragged away by police and organisers from the podium. Once you have said "Pakistan Zindabad", no matter in what context, you are no more allowed to speak. So, as a logical conclusion, she was arrested and slapped with the draconian sedition law.

Digging deeper, some media has reported that she wrote earlier Facebook posts explaining that saying "zindabad" to any country does not mean your allegiance shifted and asserted again: "Long live all countries." Perhaps what she was trying to ask was: Is it possible to love India without hating Pakistan?

Alas, it played into the BJP's hand who was waiting for something like this. The morning after her speech, Karnataka CM B S Yediyurappa declared Amulya had Naxal links. Social media flooded with right-wing trolls and leaders feeling vindicated about their hitherto unsubstantiated claims about "Pakistan Zindabad" slogans being raised at anti-CAA protests.

The case also highlights the misuse of the sedition law. Could only shouting a slogan amount to sedition? The Supreme Court has said no. Especially because the crowd did not follow Amulya’s Pakistan slogan with “zindabad”. They chanted “murdabad”. When she said "Hindustan Zindabad", the crowd joined in.

In 1995, in the case of two Sikhs charged with sedition for chanting the “Khalistan Zindabad” slogan right after the assassination of then PM Indira Gandhi, the Supreme Court overturned their conviction by a lower court. The apex court said, “...we find it difficult to hold that upon the raising of such casual slogans, a couple of times without any other act whatsoever the charge of sedition can be founded.

Following the path laid out by the SC, it should not be sedition in a democratic country to say "Zindabad" to America even if Indo-US relations ever turn bitter.

However, Amulya's place and timing were extremely wrong. She may have had a good intent, or may have been inspired by R N Tagore, most seditious of them all--the humanist who shunned nationalism and proposed internationalism. Nevertheless, uttering the slogan at a Muslim-led protest against the CAA was not wise.

Even if I don't agree with Asaduddin Owaisi dismissing her as a "liberal", I concur that the community does bear the most brunt of such actions.

But right now, nobody is ready to defend Amulya, freedom of speech, or even underline the possibility that she was misunderstood. She is alone and bearing the whole burden of her action as per the draconian laws of the state. Even her father has deserted her to "rot in jail" and refused to fight for her bail.