The struggle for 'space' in Afghanistan in future will not merely be between the Taliban and the moderate Ashraf Ghani-Abdullah Abdullah government but also involve other militant groups like Islamic State, who could pose serious threats to Indian interests, writes V Balachandran. 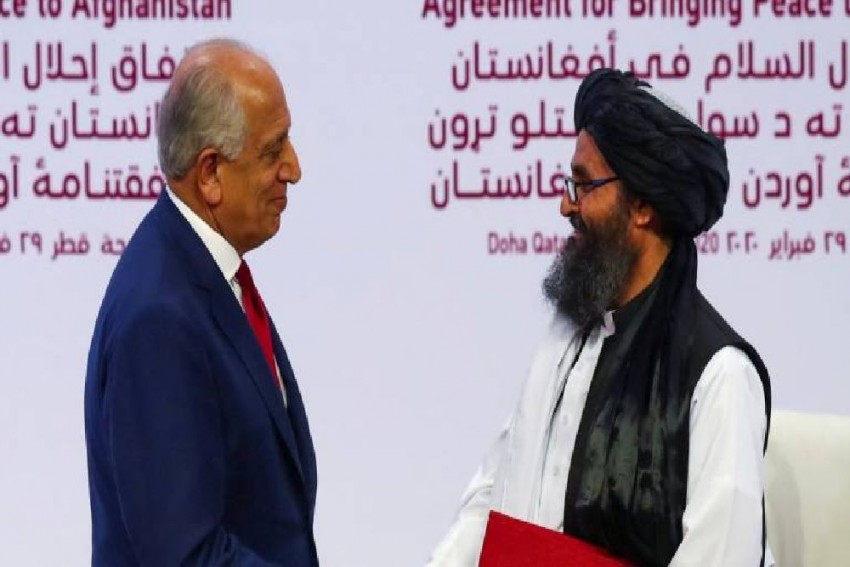 The US and Taliban representatives during the Doha Peace deal signing. (PTI)
2020-03-13T15:31:52+05:30 India Left With Limited Strategic Options Post US Withdrawal From Afghanistan 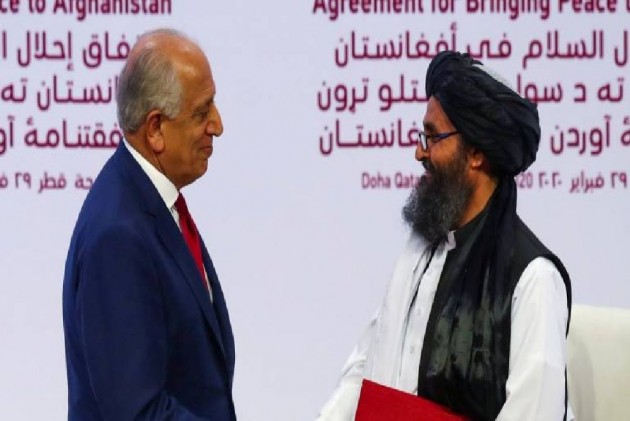 The February 29 Doha Peace Deal between the United States and the Taliban to end the two-decade-long war in Afghanistan gained momentum after President Ashraf Ghani signed an agreement to release 1,500 Taliban prisoners on March 11. But before that, on March 2, the Taliban resumed their operations against the Afghan forces. A day later, US President Donald Trump spoke to Taliban leader Abdul Ghani Baradar, but the American forces, too, resumed their defensive strikes in Helmand on March 4.

The Afghan President had refused to release the prisoners initially, for Afghanistan wasn't a party to the agreement.

Under the Doha Agreement, Taliban were to free 1,000 government detainees by March 10 in exchange for a government release of 5,000 Taliban. This agreement was signed without the official Afghan government's approval. More so, it was during a political and administrative stalemate, which had divided the government vertically as Presidential contenders Ashraf Ghani and Abdullah Abdullah argued over the election results.

Taking advantage of the confusion the Islamic State (IS) struck South-Western Kabul on March 6 killing 32 and injuring hundreds through machine guns. This was the biggest attack since August 19, 2019, when a Pakistani IS suicide bomber killed over 63 during a Hazara wedding, an indication of a remote possibility that peace would prevail even if in Afghanistan even if Taliban came on board.

There is a feeling in India that the only danger to our infra-development activities in Afghanistan is from the Pakistan-backed Taliban assuming political role there. As shown above, the struggle for “space” in Afghanistan in future will not merely be between the Taliban and the moderate Ashraf Ghani-Abdullah Abdullah government. It is also influenced by other militant groups like Islamic State and other fringe groups, who could pose serious threats to Indian interests.

In this connection, a paper “The India-Pakistan Rivalry in Afghanistan” published in January 2020 by the US Institute of Peace (USIP), the Congress-funded bipartisan federal think tank for US policymakers, needs to be analyzed by our strategists. It was written by Zachary Constantino, a former senior US government analyst who had also served as a strategic adviser to US Commander in Afghanistan. His conclusion: “Afghanistan is a theatre of competition bound to the more significant dynamics driving the India-Pakistan conflict, which show no sign of abating”.

In the chapter -- “How Pakistan could punish India in Afghanistan” -- he says that a precipitate US withdrawal without a broad-based peace deal would help “Pakistan’s incentives to alleviate domestic pressure to retaliate over Kashmir” through proxy operations in Afghanistan. This will be sharpened through three factors, viz., “deniability”, “Permissiveness” and “retaliation not assured”. On “deniability”, he cites the LeT attack on our consulate in 2014, which was not claimed even by the terror group. “Public attribution of LeT’s role surfaced only after Western intelligence reportedly shared information identifying LeT”. This would be difficult with the reduction of intelligence resources after US withdrawal.

Pakistan’s “permissiveness” has increased since it has borne no substantial costs for its role in sponsoring militant attacks on Indian diplomatic posts in Afghanistan, “a consideration that may encourage Islamabad” after US departure. Senior US officials confronted Pakistan leaders with “Compelling” evidence of ISI hand after the July 2008 bombing of the Indian embassy which killed 54 people, including Indian military attaché. They evaded the issue by making “personnel changes” without any “Institutional shift” in its policy of supporting proxy groups. As a result, another bombing took place in 2009 on the Indian embassy.

His analysis on “retaliation not assured” is interesting for those who feel that NDA government had decisively defanged Pakistan in 2019 through “Balakot” strike: “India’s ability to impose costs on Pakistan has not substantially improved since 2008; a fact underscored by the negligible results of its airstrike in 2019 …which caused minimal damage”.

He feels that the “Operation has proven to be a singular event” rather a trend and it would be difficult to repeat it in Afghanistan as remoteness "may diminish domestic pressure".

His conclusion: “The lack of options engenders a degree of risk aversion within New Delhi, which Pakistan factors into its calculus, and Islamabad probably is confident that it can parry the limited coercive measures that New Delhi has so far employed”.