Home  »  Website  »  National  » Opinion  »  Between Death And Durga: Puja In The Times Of The Pandemic
Opinion

Between Death And Durga: Puja In The Times Of The Pandemic

The author highlights the problems of commoners living in and around West Bengal with symbolically relating it with Durga Puja. 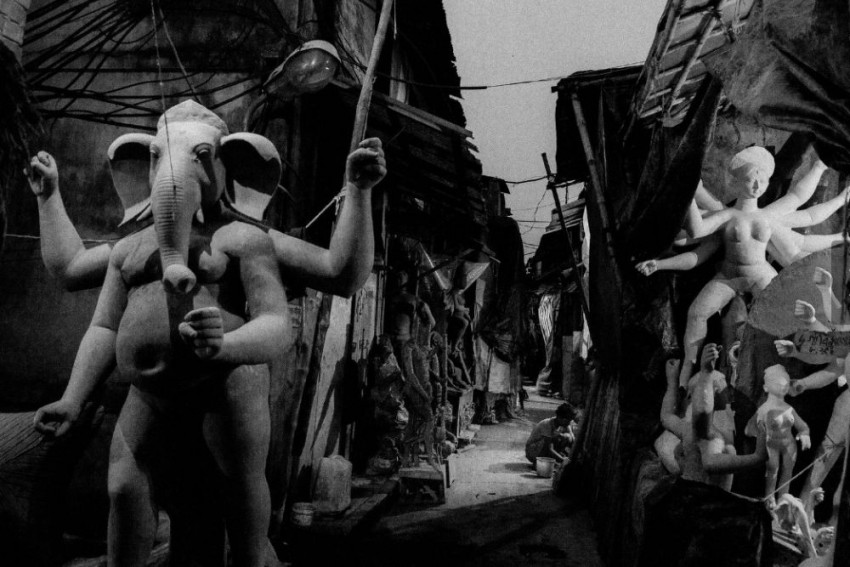 Durga Sculptors
Alisha Dutta September 22, 2020 00:00 IST Between Death And Durga: Puja In The Times Of The Pandemic 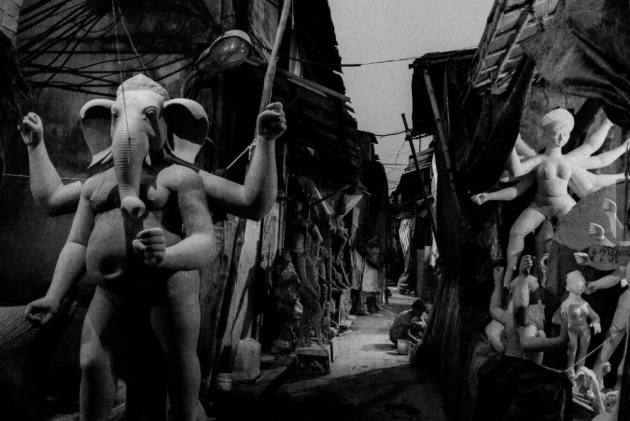 Going to a community Puja, or missing it—both can be blasphemy this year. But for entire communities dependent on it, this is a year the Goddess herself missed.

“We are unsure about Durga Puja this year.”

These are words one might have both anticipated with a sense of resignation and dreaded at the same time. One after the other, the markers of our social concourses—our ways of being—were being affected. How could this remain immune?

But when the secretary of a renowned North Calcutta puja committee finally spoke these words, the mind wandered to things beyond the community spirit and the food stalls.

What would cancelling or scaling down Durga Puja mean for the people whose lives revolve around this festival?

A Whatsapp message here, an Instagram story there, a spread of archival photographs of a Calcutta caught in the act of its annual dramatic rearrangement, or just an untimely boredom-driven scroll through one’s phone gallery…any of these could bring tears to the eyes of a Bengali who doesn’t know how the Durga Puja might look this year.

But if only for once we could keep aside all the nostalgia and shift our focus to the human kathamo on which it rests—seeing society as a bamboo scaffolding—we may see people battling unemployment, hunger, helplessness and collective uncertainty caused by the pandemic, and deepened by Cyclone Amphan.

Breaking the monotony of the government’s PSA , the beats of the dhaakis streamed in instead of the usual caller tune, instantly bringing a smile on my face. The phone was received by Mampi Das, a 19-year-old dhaaki from Gobordanga, 66 km from the state’s capital.

It was just turning August at that time. In an alternate universe, where Covid-19 wasn’t heard of, what would these months have looked like? “To be home at this time of the year would have been an unimaginable thing! Who saw this coming?”

With an ailing father and a twelve-year-old brother, Mampi and her mother are the only bread-earners in the family and unemployment has stalked them for five months. “Durga Pujo is our food provider. This is one festival we depend on and look forward to. I usually make around five to ten thousand during this time from which I save some for my wedding, keep some for my personal expenses and contribute the rest to my family,” she says. Her efforts to make some money by stitching nighties and petticoats mostly end in despair: there just aren’t enough buyers.

“We were somehow managing with much difficulty when the cyclone hit us. My house was too weak to stand against the strong winds. With barely anything to hold on to, that left us even more vulnerable. It’s not easy, worrying about both food and shelter during a pandemic,” she adds.

Pankaj Das, a dhaaki from Maslandapur, a town in North 24 Parganas, sounds equally dismayed by the current state of affairs. Like Mampi Das, many from his community have been unemployed for the last five months.

“I usually make Rs 20-25,000 around this time and since both my wife and I are involved in this, we plan our yearly finances around this one event. Having not earned for the last five months and with no hope of performing this year, I really feel helpless,” says Pankaj.

China Pal, a Kumortuli-based artist, is one of the few females in an otherwise male-dominated industry. Her words are wistful and rapt in nostalgia. “I have grown up here in Kumortuli and have always seen these narrow lanes full of people during this time. For us, Durga Pujo is not those five days of celebration but the months before that,” she says.

This iconic area in North Calcutta, which runs parallel to the Ganga ghats, today stands still. The otherwise overcrowded kumorpara is now home to deserted workshops, half-finished idols and the desolate lanes, “like it is mourning a lover’s death”, says China. “I understand these are difficult times but I wish the government had a plan for us!” while expressing her concerns regarding the plight of hers.

Shyamnagar-based Balai Pal, unlike his the kinsfolk in Kumortuli, doesn’t usually receive big budget orders and makes 20 to 25 Durga pratimas a year. “Smaller idols require more expertise than the bigger ones. Despite that, our clients are not willing to pay us for that,” he says. Unlike most years, Balai Pal has received advance for only one order and is trusting a verbal deal with two other clients. “Being the only bread-earner in a family of five, it will be very difficult for us to survive,” he says.

The pandemic massively disrupted the economy and employment cycles, but what really rendered people in Bengal helpless was the cyclone. Balai Pal’s ramshackle studio was reduced to a mud-and-straw puddle, with the tin roof nowhere in sight—and the idols damaged beyond repair.

“Should we eat, or should we repair our houses and workshops? That was the question,” says Pankaj Chitrokar, a resident of Kakdwip, South 24 Parganas, who lost both his harvest-ready betel crop and his workshop to the cyclone.

Chitrokar has been making Durga protimas for the last 15 years for clients in Delhi; this year he hasn’t heard from any of them. “It’s been extremely difficult. None of us have earned a penny for the last five months. And unlike our incomes, our expenses have not stopped,” he says. “The government has permitted malls and other businesses to resume functioning, but what about us? How will we survive?”

Siddhartha Karmakar, an expert in designing thermocol and zari jewellery for the idols, is equally disconsolate. “We don’t even have much savings to keep us afloat. How will we manage an entire year without any earnings? What do I spend on? Food or education?” he asks, exasperated. Karmakar’s son has just completed his Plus 2 but he doesn’t know how to support his education under such circumstances. The Kumortuli artist usually gets orders from places like Patna, Nalanda, Delhi, Bombay and Chennai but hasn’t “heard from anyone other than one Pujo Committee in Patna…they too sounded unsure and who can I blame!”

Dance of the Dead

“We essentially perform for people, there is bound to be a crowd wherever and whenever we perform. Now, the social distancing rules prohibit that,” says Debashish Das, leader of the New Star Chhau Dance Group, over a phone call. Having all performances cancelled, the Purulia-based artist is in a state of despondency. “Not only have we incurred losses, the company is now in debt as we were done buying the costumes. I don’t know what will get us first, hunger or the virus,” says the Chhau artiste.

Artistes like Das are neither getting the promised Rs 1,000 aid from the state government, nor the Rs 5,000 that the East Zone Cultural Centre—a nodal body to support the arts in Odisha, Bengal, Jharkhand, Bihar and the Northeast—is supposed to assign to each registered group. In place of festival lights, of those five rhapsodic nights that denote a rich and full year for Bengal’s artists and craftspersons, there’s only precarity. The Goddess has a few different demons to slay this year.

*Alisha Dutta is a student of Media and Cultural Studies at TISS, Mumbai