The event is being organised in association with the Rajasthan Youth Board (RYB), an organisation under the department of youth and sports, and the RSS-backed Hindu Spiritual and Service Foundation. 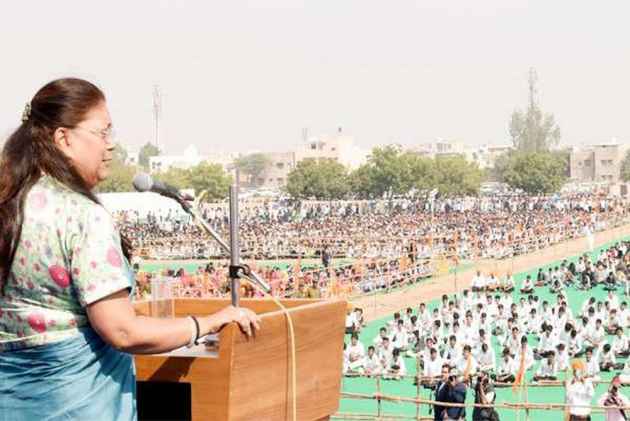 Just three days after Jaipur mayor Ashok Lahoti made it mandatory for employees of the Jaipur Municipal Corporation to sing the national anthem, the Vasundhara Raje government has decided to celebrate the first anniversary of demonetisation on November 8 by hosting a mega event where more than 50,000 people will sing "Vande Mataram" and "Jana Gana Mana."
The event, to be held at SMS Stadium in Jaipur, is being organised in association with the Rajasthan Youth Board (RYB), an organisation under the department of youth and sports, and the RSS-backed Hindu Spiritual and Service Foundation, reported The Times of India.
The report added that chief minister Raje will be the chief guest at the event, while veteran Bollywood musician Anandji of Kalyanji-Anandji fame will play patriotic tunes from Hindi movies at the function. The two-hour event also includes a yoga session which will be led by Raje.
"Such events are very important for the youth as it connects them with our culture and values. All youth wings under our organisation will participate in the event," RYB vice-president Sandeep Yadav told the newspaper.
On Tuesday, staff of the Jaipur Municipal Corporation was directed by the administration to begin their day with the national anthem and end it off by singing the national song (Vande Mataram).
The order was implemented on the occasion of the birth anniversary of Sardar Vallabhbhai Patel.
"Nothing is better than National Anthem and National Song to start and end the day with positive energy, on a positive note. Nationalism inspires a sense of service among people. I feel it should be a practice at all government offices, there should be no hesitation in being nationalist," the Jaipur mayor said.