"Modi ji changes his clothes thrice in a day. Thrice. Me, people like me don't do that. I, in fact, am too lazy to do that. " 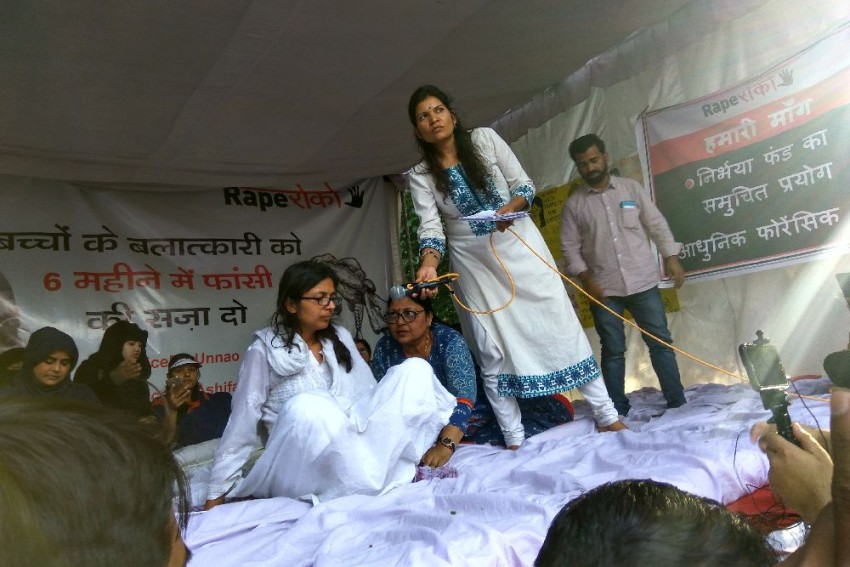 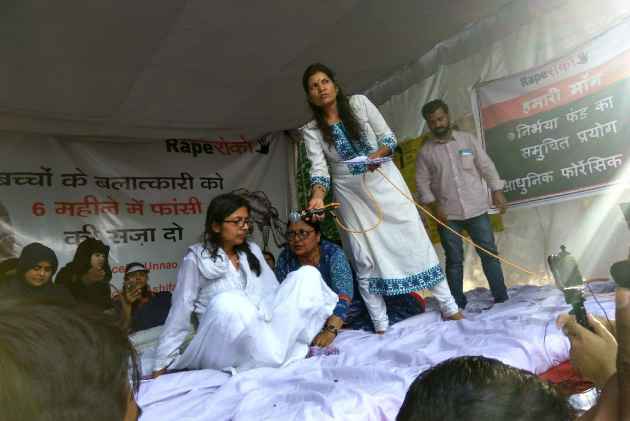 On the fifth day of DCW chairperson Swati Maliwal's hunger strike, her anger appeared to have swayed from lack of action on crimes against women and children to Prime Minister Narendra Modi's fetish for clothes.

Amid chants of 'roko roko rape roko', Maliwal through the hunger strike, which is being held following incidents of rape in Kathua and Unnao, is seeking to elicit a promise from the Prime Minister of stringent laws to deal with rape.

In attendance today were AAP lawmakers, deputy Chief Minister Manish Sisodia, his wife Seema Sisodia, JDU youth wing leader, volunteers for women's organisations and DCW, actors dressed in black sitting and reading a book by Bhagat Singh, and common woman. What was striking was the absence of common man.

Aam Aadmi Party lawmakers sat on the dais with Maliwal dressed in white. She appeared weak, but was greeted with loud round of applause every couple of minutes.

The DCW chairperson refused to speak to the press but chose instead to give a 10-minute monologue, which was an attack on the Prime Minister.

The focus, however, shifted from his alleged inaction on rape cases to his foreign visits, demonetisation and GST implementation, and even his “obsession with his clothes”.

"Modi ji changes his clothes thrice in a day. Thrice. Me, people like me don't do that. I, in fact, am too lazy to do that. We are not as rich either. I didn't even change my clothes three times on the day of my wedding, but he does it every day," she said.

However, Maliwal attack on PM's “fetish for clothes” didn't resonate with the cause of the indefinite hunger strike that has lasted for 5 days as of now.

In her monologue, Maliwal said the PM repeatedly ignored her letters which she had signed off as 'your daughter', and instead went on foreign tours when the country's daughters were dying.

"I am 33 years old, I am like the daughter of the PM. Still, he ignored my repeated requests for stricter anti-rape laws. I wrote in the letter that I am his daughter, Delhi's daughter, India's daughter," she said.

Maliwal's monologue had resemblances to that of Kejriwal’s, when he sat with Anna Hazare on an anshan in 2011 demanding Lokpal bill.

"Muje rajniti karni nahi aati,' Maliwal said, in a sudden spurt of energy. "I appealed to the politicians, and all political parties to save our daughters. I do not understand politics, yet I told them,"think politically if you want to. If you save daughters, history won't forget you."

She spoke on hardships she and others are facing in keeping up with the protest. "There are so many mosquitoes, especially in the night. It is so troublesome, but it hasn't deterred us. We will keep up with our fight. I will fight till my last breath."

J&K: No Truth In TV Reports That BJP Ministers Are Resigning In Protest, Say Party Spokespersons