'Not A Pakistani But A Kashmiri Parrot'

Has the Hurriyat mortgaged itself to Pakistan? Is it govt propaganda? What is wrong with meeting General Musharraf or Prime Minister Vajpayee? 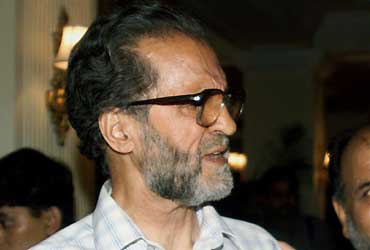 The raging controversy over the meeting of the Pakistan President, General Musharraf, and the Hurriyat is a part of a disinformation campaign aimed at projecting the Hurriyat as an impediment to the upcoming summit. The Hurriyat has been at pains to give a proper concept of its aims and objectives in an attempt to clear the misconceptions created by the Government of India.

The Hurriyat in comparison is a representative organisation, with the aspirations of the 15 million people as the core of their objectives. They cannot compete with the Government of India in terms of resources and are often the victim of false portrayal.

The letter, addressed to the Prime Minister of India and Gen. Musharraf, is an attempt by the Hurriyat to put the facts in the proper perspective. The letter may have been addressed to the administrative heads, but the real audience is supposed to be the civilised civilian structure within the two countries. It is addressed to people who uphold the principles of fair play, who are moderate in their outlook and who have a strong belief in democratic values.

Our letter is an attempt to make them understand that we have not mortgaged ourselves with Pakistan, as India would like to portray. It has been the consistent effort of the Hurriyat to explain the Kashmir point of view to both India and Pakistan, that the Kashmir issue is a political problem, wherein the sentiments and the aspirations of the people of Jammu and Kashmir are involved, and the fulfillment of these aspirations are essential to the solution of this problem.

The Kashmiris have suffered the most in the shadow boxing between the two nations and are bound to suffer more, if the prevalent, persistent obstinate stance is any indication.

The Kashmiri psyche is in a desperate urge that the Kashmir viewpoint be explained without any corruption to the basic facts. It is the people of Kashmir who are suffering the most, while the Kashmir issue and the sufferings are unabashedly being used as inputs for political sports, and diplomatic brinkmanship, tailored as per the needs and interests of the two countries.

The hullabaloo over the proposed meeting is uncalled for. Two heads of state can meet. But an aspiring state representing the crux of the problem, involving a hapless suffering population has no right to meet. We may not be a state yet, but we represent the people. Are people irrelevant in the field of geo-political sphere of bilateral interests?

The Hurriyat wants the civilised structure in the two countries to form a constructive opinion and help defeat the forces of destruction. The administrative set up within the two countries should not be a hostage to the reactive opinion of a possible climbdown, instead the administrative set up in both the countries should be hostage to the yearning for peace and conflict resolution. The civilised structure has to rise upto the occasion and brush aside the right wing apprehensions and paint a realistic picture of the ongoing struggle. Distortion of facts from either side has to be thwarted.

Right from the outset, the Hurriyat was approached by the Government of India for a dialogue. The Hurriyat did not go in for a dialogue, because the Indian Government has left a chain of broken promises in the past. India had religiously adhered to Machiavellian philosophy in the past. The presence of the BJP at the centre rekindled the hopes of an honest resolution of the problem. The Hurriyat unwittingly viewed the BJP as a patriotic party with the interests of the country close to their heart.

The Hurriyat did not want to lose the opportunity and was averse to use the historical misdeeds of the previous governments as a yardstick to gauge the intentions of the BJP. It reciprocated the ceasefire call of the BJP-led Government, and went a step ahead by praising the Prime Minister and describing him as sincere, despite the continued bloodshed in Kashmir at the hands of the same Prime Minister's armed forces. The intention was to make a break from the cruel past. Hurriyat further initiated the idea of a visit to Pakistan.

The idea and the objective of the visit were well received by the Indian Government at the informal level. Once the intentions of the visit were made public, the Government of India took a diametrically opposite view at the formal level and did not allow the visit to go ahead. Whatever the rationale behind the refusal of the visit, the people of Kashmir saw it as an attempt by the Government of India to unfairly cut down the Hurriyat to size. The erroneous decision in not allowing the Hurriyat to go to Pakistan could have been compensated by facilitating a meeting with Gen. Musharraf during his visit to India.

Instead, a controversy has been generated to the detriment of the upcoming summit. "The Kashmiris cannot visit Pakistan, The Kashmiris cannot meet Musharraf. They can meet Mr. K. C. Pant". This blatant didactic approach of the Indian Government has only helped to reinforce the colonial image of India.

What is the problem in meeting Gen. Musharraf? And what is the problem in meeting Mr. Vajpayee? The Hurriyat wants to meet both the heads, because Kashmiris are segregated on both sides of the LoC. Both the parts are under illegal occupation. Any meeting in isolation of either head is a futile exercise, like the upcoming summit, which is mired in bilateralism, fuelled by the arrogance of power.

India has a history of arrogance of power in Kashmir. Sheikh Abdullah risked his political career and was overtly seen as pro- India. The moment he started making pro-Kashmiri noises, he was unceremoniously dropped, arrested and replaced by a new Kashmiri - Ghulam Mohd. Bakshi.

The present situation smacks of the same imperialistic fervour. The Hurriyat was informally engaged in negotiations by the Government of India. Futile engagement took precedence over sincere efforts to find a solution right from day one. Take the example of the K.C. Pant episode.

The informal parleys were on, with Mr. Pant nowhere on the scene. Suddenly Mr. Pant appeared formally out of nowhere and took the Hurriyat by surprise. This was followed by the invitation to Gen. Musharraf. The story goes on and on.

The Hurriyat is not a Pakistani parrot. It is a Kashmiri parrot. Pakistan is playing its cards well and taking care of the sentiments of the people of Kashmir. India is arrogant in the belief that the occupation will last for ever.

The Hurriyat constitution is not averse to any option. Pakistan is as wary of the third option as India. The role of Pakistan too has come under fire from a section of the Hurriyat. Yet, the Indian establishment is busy painting the Hurriyat as a Pakistani parrot.

The involvement of the Hurriyat in a tripartite dialogue would have signalled a clean break from the past and heralded a new era, based on both realistic and moralistic politics. The exclusion of the Hurriyat is a mutual decision of both India and Pakistan. Pakistan has been able to feign commiseration over the exclusion, while India is bending backwards to express its glee over the exclusion. This is nothing but an exercise in self destruction. The Home Minister of India, Mr. L.K. Advani, loses no opportunity to berate the peace parleys.

A few days back, he was at his audacious best and tried to draw parallels between Sindh and Kashmir. The vitriolic of Mr. Advani represents the symptoms of a deeper malaise afflicting the Indian psyche. They are trying to consecrate denial of just rights by making incongruous comparisons.

Not to be out-done in the race to vilify the Hurriyat, some Opposition parties in India have rewritten a new chapter in apartheid by threatening to boycott the tea reception of the Pakistan High Commissioner, if any Hurriyat member is invited. Are the Kashmiris less human than the Indians.

Both India and Pakistan have stuck to rigid posturing over the past five decades at the cost of thousands of Kashmiri lives. The right wingers are having a field day, whipping up an emotional frenzy. The reactive costs of this rigid posturing and emotional frenzy is not borne by either these right wingers or their kith and kin. It is borne by the impoverished citizens, especially those inducted into the armed forces out of domestic economic compulsions.

The right wingers want rigid posturing to be the guiding force as against realistic economics. Poverty breeds and provides the necessary fodder for rigid extremist posturing.

This is not the first time that bilateral talks are being held between India and Pakistan. They have been taking place in the past as well, with similar media hype and have often ended without any progressive or constructive content. A major portion of the time and scarce resources of each country are used to put each other down and, now they want us to believe that, overnight they have developed pangs of sincerity and want to change history. The exclusion of the Hurriyat from the talks is an indicator of lack of sincerity in any resolve to solve the issue.

The Government of India should understand that Gen. Musharraf needs an explicit Hurriyat endorsement in order to sell any peace package, back home. A sincere effort for the resolution of the Kashmir issue will take the Kashmiri route. If you want to change history within or outside the stated positions, the Kashmiris will have to be the integral part of any such effort. They are the basic party and any solution acceptable to them will have to be accepted by the secondary parties.

'Mr. Karunanidhi Has Always Been A Man Of Two Faces'