Home  »  Website  »  International  » News Analysis  »  The Wise Men Of Democratic Party Finally Seem To Have Got The Better Of Bernie Sanders. Or Did They? 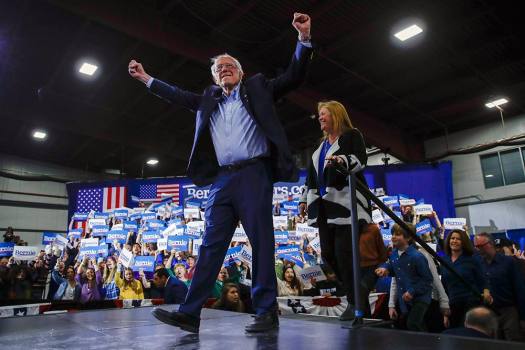 After electrifying the moribund campaign for the US presidential elections, scheduled for November, with a series of radical ideas that promised to fundamentally alter the American way of thinking, Bernie Sanders on Wednesday announced his withdrawal from the race, paving the way for his Democratic rival Joe Biden to take on incumbent Republican Donald Trump.

The Vermont Senator had been a crusader against the rising wealth gap in the world’s richest nation and relentlessly campaigned for taxing the rich, while seeking a basic universal healthcare for all.

But to a large number of others, what seemed to be working was his attempt to raise the anc­ient and universal issue of inequality: the wealth gap between a “few rich people” and large numbers of “poor Americans” as he had been highlighting at all his rallies.

Unsurprising, his avowed left-leaning stand had been a point of attraction in an era where people are questioning the benefits of a capitalist order and demanding a more equitable world.

Surveys show that socialism has a much more favourable view among the under-30 voters now, than it had during the previous generation.

Sander’s diatribe against the big American corporations, billionaires and Wall Street had hit home with unerring precision among large number of voters in the United States, particularly the youngsters. But it had also managed to gather a fan-following beyond the American shores.

Many young Indians wanted, if the situation permitted, to go to the US and campaign for Bernie.

The 78-year old, oldest among the field of candidates, had stormed through the early primary voting states for the November presidential election. He had registered strong performances in Iowa, New Hampshire and Nevada in February. Starting from South Carolina, the political momentum began to turn against Sanders and by default, gave life to the sputtering campaign of Joe Biden.

Much of the developments happened, reportedly, due to the active mediation of Democratic Party stalwarts, who asked party delegates to close ranks to deal with the Sanders onslaught.

A stage that was crowded with Amy Klobuchar, Pete Buttigieg, Mike Bloomberg and Elizabeth Warren, was finally reduced to the two old white men. The centre-right Democrats from several states, including Washington, Florida, Michigan and Texas, suddenly began to align behind Biden.

It was argued that Sanders, who did well in a divided field, was not formidable once the race narrowed down between him and Biden.

Some commentators stressed the campaign, which had thrown up a variety of ideas in the past months, was not about ideology but electability.

One of the most interesting developments that are widely believed to be a contributing factor to Sanders’ loss to Biden was the failure of young Democrats to turn up during the crucial state preliminaries.

Polls had shown Sanders’ unique popularity among the young voters. He was the first choice for over 50 per cent of Democratic primary voters in the age group of 18-38. He had won the youth vote in every single state. But, in the absence of a spike in overall youth turnout, Biden managed to win 10 out of the 14 states on Super Tuesday.

Some experts say this pertains to the larger question of perennially low youth turnout. They point out that in any given election in the US, the young adults are always at lower rates than their older counterparts. This had also happened in 1972, when the voting age was lowered to 18 through the 26th Amendment.

A compelling reason for the low youth turnout was the complicated process of the party preliminary elections. Few leaders have so far spent time in explaining the cumbersome process of the preliminaries to these young voters.

As a result, only a few of those who thronged every Sanders’ rally and lustily cheered for his radical ideas, turned up on the crucial day of the election.

Significantly, this is the second time that Sanders—a self-decla­red democratic socialist and the only American politician in history to have his honeymoon in the Soviet Union—has been derailed by the Democrat Party establishment from getting the nomination for the presidential election.

Four years ago, the party had used all the tricks to deny him a nomination over its favoured candidate Hilary Clinton, in the process poisoning the Democrat’s campaign and smoothening the way for Donald Trump’s victory.

One out of every eight Sanders’ supporters was supposed to have voted for Trump in the last election. Some fear, it could be repeated even in this year’s elections.

Perhaps, to prevent that from happening, Biden sought to enlist Sanders and his supporters’ endorsement in his fight against Trump. “Bernie Sanders hasn’t just run a political campaign, he’s created a movement,” he said, thanking him for being a “powerful voice for a fairer and more just America.”

But, what does Bernie Sanders, who was never afraid to wear his political conscience on his sleeve, leave behind?

“On whatever terms the senator exits his primary battle with Biden, America’s left is in the throes of a golden age,” commentator Ed Luce had predicted last month in the Financial Times.

Though socialism was a popular ideology in the US at the beginning of the last century, it faded away in subsequent years and was associated as an unpatriotic act once the Bolshevik Revolution established the first socialist state in Moscow.

But is the idea now staging a comeback in the world’s largest capitalist country?

Observers point out that Sanders might be out of the race but many of his ideas, although in different forms, have already become part of the Democrats’ agenda.

Interestingly, the latest UN report on the economic impact of the coronavirus pandemic predicts the possible loss of nearly half a billion jobs in the world by the time life comes back to normal.

In such a scenario, how will the Vermont Senator’s radical thoughts haunt US policy makers as they try to find equilibrium in a Covid-19 scarred society?