With four-storeyed houses replacing the single or double storeyed ones, Panchsheel Enclave has changed beyond recognition. 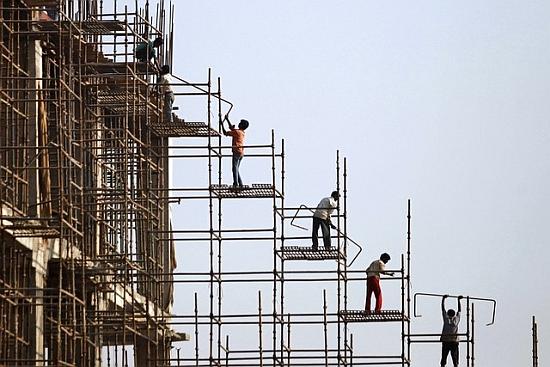 A visit from the builder lobby

Last October I found myself sitting next to a well-dressed, short statured man. Dark complexioned, he wore a charming smile. His visit to my place had a one-point agenda: to ignite the spark of greed in me. His modus operandi: a lucrative offer to let him redevelop the property I owned. He'd build four-storey house. Three plush apartments will be mine, one will be his.  Plus he'll give me substantial cash amount upfront (Perhaps unaccounted? Okay). Evidently the colour of this cash amount won't be white.

Before he could churn out further details, I cut him short: At my age nearing 80, I emphatically told him, I am a contented man. No ambition for more wealth, additional comforts or material possessions. Why I was declining such a lifetime lucrative offer? Why? "We can negotiate. The cash amount can be enhanced", he played his last card. My reply was still No. He appeared perplexed and unconvinced.

A little while later, he's all appreciation for my response. This time I was perplexed. I thought he is trying to please me for which there was no need. We had a pleasant talk on varied subjects: old age, new generation's hedonistic pursuits, state of the art apartments etc. He said "you are one of the colony's oldest residents. You have been, I understand, active in welfare activities, holding important posts in the local residents' welfare body. Most of the house owners are known to you. If any of the owners is interested in property redevelopment, do refer them to me."

Panchsheel Enclave, in South Delhi has been our abode since 70s. Some of the old occupants have departed, signalling "you are the next". With four-storeyed houses replacing the single or double storeyed ones, the colony has changed beyond recognition. Being degraded constantly the colony is disintegrating slowly. Trucks are parked haphazardly, loading malba, unloading bricks, iron roads, stone dust etc. Workers and their families reside in the under construction houses, nearby nallah is used to answer the call of nature. Workers are seen heading towards the bush-infested nallah carrying plastic water bottles to unload the morning cargo. During night, bloated bladders compel them to seek solace in the semi dark corners. Unbearable urine charged stench pervades the atmosphere. A leftist friend observed it's real democratisation, haves and have nots sharing the common space though temporarily. Local welfare body is helpless and expresses its inability to rein in the builders.

He wished me with a warm "Adab Arz" and sat down on the floor "what is new Mianji".  He turned somewhat grim and said "Houses are being torn down, new high rise buildings are coming up. Janaab, I live in the nearby village Hauz Rani in my own house of 50 yards. In the last few months, three builders have met me, offering me 15 lakh rupees and two newly built flats on my land. In return he'll erect a four-storeyed house. Out of the four, two will be given to me, two he'll retain.

"What have you decided?" "No was my answer," he said. "Right now I am a house owner. I shall then become suddenly a flat owner."

One afternoon, notes of instrumental music and ghazals filled the living room.  A former student of mine a budding poet and having leftist ideas entered the room. "It is difficult to recognise the colony. Sir, it's mess all around."  He instantly composed a couplet which he felt sums up the situation.

For few lakhs the colony is being slaughtered
The hunger for wealth was not so intense earlier.

Few years ago, the police, acting on a tip off, raided a Guest House on the main road (since closed) and arrested three African men and two call girls.

The Welfare Association invited the Hauz Khas Police to discuss the law and order situation.  An elderly temple-going resident with religious credentials asked "Sir, when the police entered the room what's going on?"  Hot with anticipation, he was hoping for solicitous descriptions of the goings on there. But, with a poker face the SHO said:

Karawai ho rahi thi (Work was in progress!).  Action was being taken.

I was reminded of this quotation:

"A puritan, according to Huxley, is one who is preoccupied with sex thoughts!"

Countering the charge that the judiciary lacks a sense of humour, a retired High Court Judge, a co-resident, narrated this:  During the hearing, a shoe was flung at a judge who always sat with tilled head.  The shoe missed the target. Moral: A judge should not be upright.

R.L. Saggar is a media educationist and consulting editor.