'My Aim Is To Be A Good Driver'

'After the first race in Melbourne, a lot of people are recognising that. I just need to continue the good job that I have done. In that way, 2005 is going to be a challenge for me but I am up to it.' 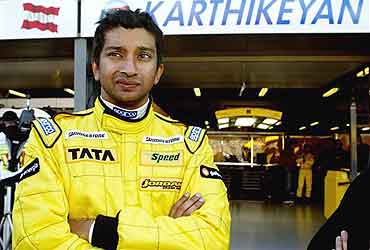 Narain Karthikeyan, who made his Formula One debut in Melbourne last week, says his true potential will surface only after the first seven races where he'll be aiming for the chequered flag.

Happy with his 15th place finish in the season opener, the 28-year-old Karthikeyan says he has made people sit up and watch him perform.

"It (debut in Melbourne) was a case of driving alongside high profile names. I want to establish myself as a good driver. After the first race in Melbourne, a lot of people in the business are recognising that," Karthikeyan said over phone from Kuala Lumpur, where the Indian will compete in his second F1 race on March 20.

Excerpts from the interview in which Karthikeyan, who stood sixth overall in the Nissan World Series 2004 (unofficial Formula Two of Motor Sport racing), dealt with his debut event in Australia and what is in store for his growing number of fans in India at the Sepang Circuit (Malaysia) next Sunday:

Q. It was creditable that you set the best lap time among the rookies in Melbourne despite a bad start. How were you able to achieve it?

A. I had a bad start alright but picked up during the second part of the race and my car worked well enough for me to set the best lap time amongst the rookies.

Q. Did you push the limit during the 57-lap race?

A. Obviously you were pushing the car to the limit in every lap. When the fuel load goes down, that is the time one tries and gets the best out of the situation. That is how the whole thing went. I was quite happy. The only real moment in which I was in a dangerous position was when I came in to the pits. I locked all the four wheels and the car went a bit sideways on entry. It was not such a big risk and it was all controlled rather very quickly.

Q. How do you feel about the 2005 season and your prospects?

A. Obviously, my aim is to establish myself as a good driver. After the first race in Melbourne, a lot of people are recognising that. I just need to continue the good job that I have done. In that way, 2005 is going to be a challenge for me but I am up to it. I will give it my best shot and put in 110 per cent to perform better and better.

Q. How confident are you of improving on your 15th spot finish to go up in the order of merit in Sepang?

A. I am aiming to finish the race whether it is the 15th or 16th place. At this point of time, we are not in an ideal position. When the opportunity comes to score points, we will do that. It is very hard to predict as to when we will get better finishes. I am not going to put pressure on myself because Formula One is a speed learning curve and one has to learn as it comes. If you rush things, you may not achieve anything at all.

'India Lacked The Hunger To Win'