Lanka Staring Down The Barrel

Chasing 436, Indian bowlers effect four dismissals in the final session to leave the visitors, at 123-5, with the daunting task of batting out the final day to stave off defeat. 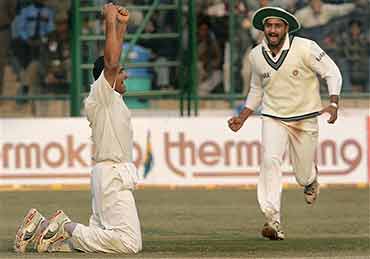 India brought themselves within sniffing distance of victory in the second Test today with four late strikes against Sri Lanka who are left with the daunting task of batting out the entire last day to save the match.

After setting the visitors a huge 436 runs to chase, the hosts scalped four wickets in the space of just 14 runs to swing the game decisively in their favour on the penultimate day of the match.

Anil Kumble, wrecker-in-chief in the first innings, picked two wickets in the space of five balls, including the key wicket of captain Marvan Atapattu, to leave the Lankans tottering at 123 for five at close.

After Harbhajan Singh claimed Thilan Samaraweera to signal the end of day's play, Sri Lanka were left with another 313 runs to win but India picking the remaining five wickets looks more probable with a full day's play left.

Only thrice in the history of the game has a team successfully chased a target in excess of 400, with Brian Lara's West Indies making 418 for seven to beat Australia at St. John's in 2002-03 for the highest chase ever.

The Indians were able to post a commanding overall lead, thanks to a breezy 104-run stand for the unbroken seventh wicket between Mahendra Singh Dhoni and Yuvraj Singh.

Dhoni's quicksilver knock of 51 not out from as many balls contained five fours and two sixes while Yuvraj Singh overcame a shaky start before going on to make an unbeaten 77.

Sri Lanka made a positive start in pursuit of a daunting task with Atapattu and Kumar Sangakkara featuring in a determined second wicket stand during the most of the afternoon session and three-quarter hour into the last session. Kumble wheeled away for 12 overs non-stop on either side of the tea break. Although he went wicketless, Kumble returned after Ajit Agarkar gave the breakthrough, to pick two wickets in the same over and tilt the scales in favour of the hosts.

Atapattu looked impregnable during his three-hour stay at the crease until the 35-year old leggie deceived him in flight and took a low return catch to dismiss him for 67.

India's leading wicket-taker, with six for 72 in the first innings, then had night-watchman Malinga Bandara out leg before off the last ball of the same over.

When Samaraweera played a casual drive and edged a simple catch to Rahul Dravid off Harbhajan, the Lankans had slipped from a strong 109 for one to 123 for five in 15 overs.

After Avishka Gunawardene (9) fell leg before to Irfan Pathan at 30, Atapattu and Sangakkara carried the attack to the Indian camp.

The duo withstood a probing spell by Kumble and Harbhajan after tea before Agarkar provided the hosts the breakthrough, inducing an outside edge from Sangakkara to wicketkeeper Dhoni.

Sangakkara had made a rousing start, whipping two fours off Pathan in the very over he got Gunawardene, and added 79 runs in a second wicket partnership that frustrated the Indians until Agarkar removed the left-hander in his second over after tea.

Kumble and Harbhajan bowled 17 overs between them on the trot when play resumed after tea, conceding only 44 runs, to pull back the Lankans. Atapattu was in cruise mode, regardless of the situation. He drove Pathan and Agarkar off the new ball.

Even as Kumble kept varying the angles and the length, Atapattu showed good concentration to pick the long hops and put them away to the boundary.

Earlier, India, resuming at 237 for five, consolidated their strong position with Yuvraj and Saurav Ganguly seeing through the first hour with cautious batting.

A combination of defensive bowling tactics - the visitors did not claim the new ball when due, and some spirited ground fielding kept the batsmen in check.

Yuvraj struggled to read Muttiah Muralitharan and was circumspect against Dilhara Fernando's seam bowling as well.

Ganguly, in the circumstances, did well to counter Fernando who bowled to a packed off side field.

It was only after 81 minutes when the day's first boundary came via a paddle sweep by Ganguly against Muralitharan.

But the offie had the final say, and his first wicket of the innings, when the former captain inside edged a floater on to his stumps. Ganguly's association with Yuvraj brought 81 runs for the sixth wicket from 204 balls. 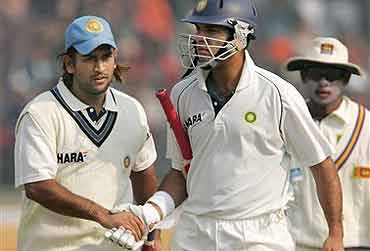 Dhoni attacked from the outset, stepping out and lofting Muralitharan to the long-on fence.

Yuvraj then drove the offie off the pads to mid-wicket to move to 49, and then completed the half century with a cheeky single. His 50 came after 160 minutes from 123 balls with seven fours.

The 300 came in the 95th over before Dhoni collected two fours from a Malinga Bandara over which cost 17 runs including two boundaries through byes and leg byes. The Indians turned on the heat after lunch.

Fernando misjudged a high catch of Dhoni at long on off Bandara. The Jharkhand player was on 28 then, and punished the Lankans for the error by swatting the leggie for a flat six at the same spot in the next over.

That huge hit brought the 350 up, and another one off the same bowler at widish long on gave Dhoni his first half century in Test cricket.

Yuvraj and Dhoni added 104 runs for the unbroken seventh wicket from only 83 minutes and 116 balls.

Dravid, whose captaincy has been founded on aggression, declared 35 minutes after into the second session, leaving the Lankans more than four and half sessions to overhaul a target never achieved before.

The visitors, however, responded positively.

Although Gunawardene departed early, Atapattu and Sangakkara began to play their strokes from the word go.

Atapattu struck two trademark cover drives, one on the backfoot to Pathan and another on the front foot to Agarkar.

Pathan had Gunawardene trapped plumb in front, but in the same over Sangakkara struck him for two fours.

He whipped the first ball he faced, a full volley, to the mid-wicket fence and then swung the blade, balanced on one foot, to pick a wide delivery and put it past point.

The left-hander then welcomed Kumble with a silken drive to the extra cover boundary.