At the Jaipur Literature Festival, her poetry reading session at the Front Lawn is packed with her fans, mostly young but some parents too. 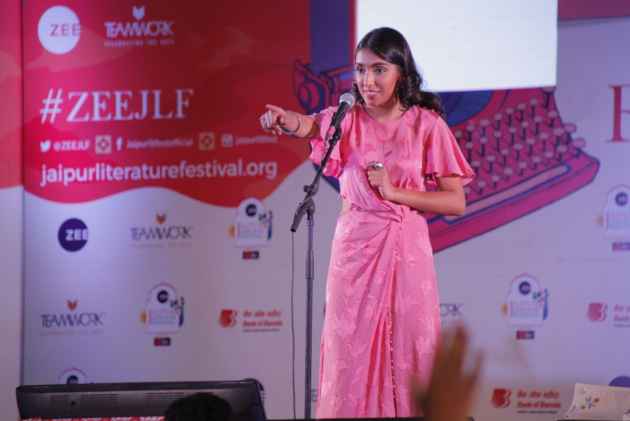 Rupi Kaur, the young Indian-Canadian poet sensation, has sold three million copies of her first book milk and honey, which topped the New York Times bestsellers list and remained on it for a year. She came out with her second anthology of poems sun and her flowers last year. Here, at the Jaipur Literature Festival, her poetry reading session at the Front Lawns, the biggest venue at the festival, is packed with her fans, mostly young but some parents too. They know her poems by name and they roar and cheer as she announces the next one is going to read.

When most publishers wring their hands in despair at the mention of a poetry book what is it that makes Kaur tick? "You know, it's unbelievable, I still don't believe it. I am still like, what! But I think it's always existed, you know, as long as human beings have been around, poetry has been around. So, it's really God that has given me this chance," says Kaur, who is warm and down to earth up close.

Kaur was born in Punjab and her family moved to Canada when she was very young. Her poetry touches upon the themes of racism, abuse, right of a woman over her body, feminism, love, hurt and longing. She is more of a performer poet, she does shows of her poetry reading standing up, charged with energy. "Yes, performance for me is very important. You know, to sit around a campfire and recite poetry and sing has never gone out. So, that's why performance for me so amazing. What is folk music, if I listen to folk music from a country I have never been to from a language I never speak, for some reason, I know it. It makes my body sway and performance poetry is also in the same way. Before I wrote the poetry book, I was performing for years. So, there are only so many syllables in a specific line, I write like that. That's why I want every reader to come to my show because I am like, I know you like the book, I know you follow me on social media but it's only when I read my poems, when I perform, they really come full to life," she says.

Kaur insists her poems are to be read aloud and urges her fans also to perform even if they are alone. "Yeah, what is so cool is when you read them aloud they sound different. Recently I had five other women up there with me reading from sun and her flowers and that was absolutely incredible. They can also be lyrics for songs. One of my friends has actually sung them. One of her songs was used in the trailer for milk and honey and other songs were used in a web series," she says. Kaur has a packed schedule in India. She goes to the Kolkata Literature Festival from Jaipur and has her poetry performance in Delhi on 1st February, she then goes to Bangalore, Chandigarh and Mumbai. Her fans could well plan to attend her shows as Kaur says that's when her poetry really comes alive.