MS Dhoni set the tone with a running catch early in the sixth over, then Rohit Sharma responded with a blinder in the 24th over. 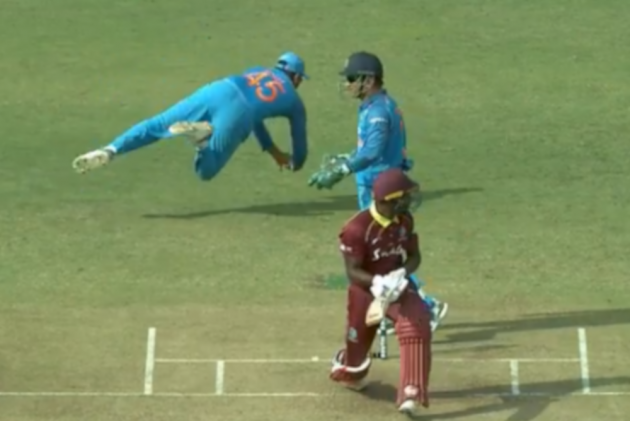 India showed their class on the field by taking as many as six catches against the Windies during the third ODI match at Pune on Saturday.

MS Dhoni set the tone with a running catch early in the sixth over, then Rohit Sharma responded with a blinder in the 24th over.

Rovman Powell tried to play a cut shot against Kuldeep Yadav's googly, but it produced a thick outside edge. Rohit, at first slip, completed the catch by diving to his left. Brilliant reflex action.

Pacer Jasprit Bumrah denied Shai Hope a second-consecutive century on his way to a four-wicket haul but the West Indies made a superb recovery after a shaky start to post a respectable 283 for nine.

Returning to the team after being rested for the first two matches, Bumrah emerged the most effective bowler, conceding just 35 in his 10 overs.

Bumrah sent both the visiting openers -- Kieran Powell (21) and Chanderpaul Hemraj (15) -- in his first spell to give India a solid start and later dismissed Hope and Ashley Nurse (40).

Hope, who had struck an unbeaten 123 in the Visakhapatnam ODI, played a significant role in reviving the Caribbean innings with his 95-run knock, which came off 113 balls.

Towards the end, Nurse and Kemar Roach (15 not out) added crucial 56 runs for the ninth wicket, taking the side close to 300-run mark.

The West Indies batsmen got starts but could not convert them into big knocks and also struggled to form big partnerships.