Two leaders of Samyukta Kisan Morcha, which is spearheading the movement against three farm laws in north India, have joined the event 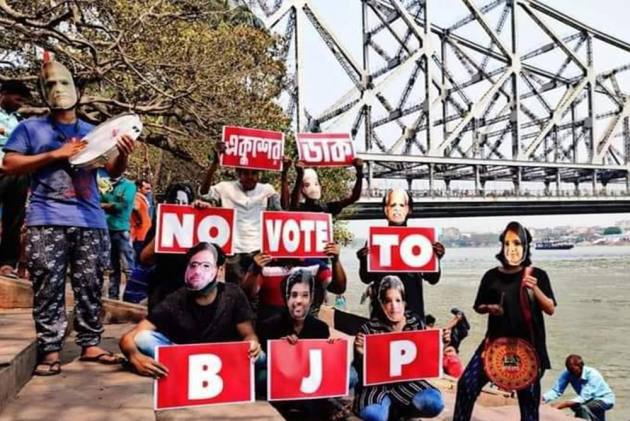 Two separate civil society initiatives calling for voting against the BJP is gaining momentum as the state Assembly elections inch forth. One of the organisations, “Bengal against Fascist BJP-RSS”, is holding a public rally in Kolkata where supporters and organisers of this programme in different districts have also joined.

Over the past one month, posters printed with “with vote to BJP” written in white letters on red papers appeared a several town of different districts of Bengal, apart from places in Kolkata. The organisers of “Bengal against Fascist BJP-RSS” have also conducted campaigns in different rural pockets.

The forum mostly draws force from students, cultural activists, trade unionists, rights activists and social workers. Most of them appear to have Leftist leanings but are not outright supporters of the CPI(M)-led Left Front. It is mostly from the smaller Left parties and organisations that this campaign draws its workforce from.

On Wednesday, these activists gathered at Ramlila Maidan in Maulali area of the city in the afternoon for proceeding towards Esplanade area in the heart of Kolkata with a rally.

Two leaders of Samyukta Kisan Morcha, which is spearheading the movement against three farm laws in north India, have joined the event. Kisan Morcha leaders Abhimanyu Kohar and Manjit Singh Dhaner are scheduled to address the gathering.

“As of now, our platform is not calling for vote in favour of any party. We are urging people to vote out the BJP because the BJP cannot be compared with any other party, it’s the biggest danger,” said filmmaker Aniket Chattopadhyay, one of the conveners of the movement.

A Facebook group that was created on December 31 for this campaign had more than 20,000 members by March 20.

“Resisting the rise of the BJP-RSS should be the top-most priority for every well-meaning individual. We have our criticisms of the CPI(M), the TMC and the Congress. But we are prioritising the task of stopping the BJP’s progress,” said scholar and cultural activist Kasturi Basu.

The campaign also includes leaders of the land agitation in Bhangar, many of whom had been jailed by the Mamata Banerjee government and even slapped with sections of the Unlawful Activities (Prevention) Act. Keeping their battle with the TMC apart, these leaders have decided that resisting the BJP’s rise in the state was of the highest priority.

“The BJP and the RSS will ruin Bengal’s culture. We must resist them first,” said Anirban Banerjee, a leader of Jatiyo Bangla Sammelan, a one of the Bengali nationalist groups that has emerged in the state over the past three years.

Incidentally, even though this campaign is calling for vote against the BJP, the campaign on social media has drawn most of the criticisms from the supporters of the CPI(M), who alleged that it was a TMC-backed initiative. Adding a twist to the tale, Chief Minister Mamata Banerjee publicly thanked the “no vote to BJP campaign and the leftwing party CPI-ML (Liberation) for taking a stand against the BJP.

The CPI-ML (Liberation), which at the national level often shares a dais with the CPI(M), has criticised the CPI(M)’s role in Bengal as “narrow”. They have decided to field only 12 candidates and in the rest of the seats they are likely to support the strongest contender against the BJP, be it from the Left Front, the TMC, or the Congress.

Other organisers of the “no vote to BJP” campaign include human rights activist Sujato Bhadra.

A second civil society initiative, under the banner of Friends of Democracy, is also carrying out campaign against the BJP. This includes several human rights activists and academicians, most of them known to be leaning towards the TMC.

The BJP has rubbished their initiative as ineffective. The party has no need to bother about “a worthless hullabaloo by some opportunist intellectuals,” the BJP’s state unit president Dilip Ghosh said.