People have started discussing if the Congress chief, as an Opposition MP, would be able to bring developments as promised, during his poll campaign, in the constituency nestled in the Western Ghats. 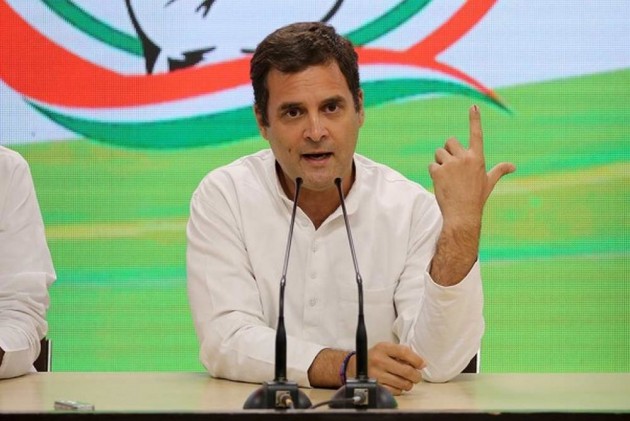 Voters of Wayanad Lok Sabha constituency wondered if Rahul Gandhi as opposition MP would be able to develop it, as local Congress-led UDF workers burst crackers Thursday celebrating a 'resounding win' of the Congress chief with a record-breaking margin from the seat.

People have started discussing if the Congress chief, as an Opposition MP, would be able to bring developments as promised, during his poll campaign, in the constituency nestled in the Western Ghats.

Kamaal, a smalltime businessman in Kalpetta town, the district headquarters of Wayanad, said people anticipated that a Congress-led UPA government headed by Rahul Gandhi would be constituted at the Centre post-election and development issues of the tribal-dominated constituency addressed.

"The voters have given Gandhi a record-breaking victory margin of more than four lakh votes," he said. "Unfortunately, it is again a BJP-led NDA government at the Centre. I don't think Prime Minister Narendra Modi will be so keen to address development issues of Rahul Gandhi's constituency," Kamaal said.

O N Gopalakrishnan Nair, a booth-level leader of the Congress party in Poothadi panchayat in Wayanad district, is of the view that both Modi and the Congress chief may be political opponents.

But there would be friendship among them beyond the barrier of politics and the development needs of Wayanad to be raised by Gandhi are expected to be attended to by the BJP-led government, according to him.

Talking to PTI, senior IUML leaderMunavarali Shihab Thangal shared the concerns expressed by the people over the development issue, saying the rival government is unlikely to pay heed to development needs of Gandhi's constituency.

"There is a concern on how much Gandhi can do for the development of Wayanad," he said.
Thangal said Gandhi's candidature in Wayanad has helped the Congress-led UDF to sweep a majority of LS seats in Kerala.

"The people of Wayanad have given a historic margin for Gandhi. There was a Rahul wave across Kerala. We are very happy about it. At the same time, we are disappointed about the dismal show of the Congress-led UPA in other parts of the country," he said.

As per the latest trends, Rahul Gandhi is heading for a record-breaking margin over his nearest rival CPI's P P Suneer in the Wayanad constituency, as roads in front of counting centres in this hill town wore a deserted look.

As counting progressed, Gandhi established a lead of over four lakh votes, probably the biggest margin in the Lok Sabha elections in the State.

Local leaders assembled at the DCC office bursting crackers in anticipation of the big win and shouted slogans congratulating the Congress chief.

However, there was a palpable sense of disappointment with the Congress-led UPA's poor show in other States with senior leaders trailing according to the latest trends.

Gandhi is contesting a second seat from the Wayanad Lok Sabha constituency nestled in the Western Ghats, besides his traditional bastion of Amethi.

Asked why there was no big celebrations on the streets in Gandhi's big victory, a Congress leader said the party workers were disappointed over his defeat in Amethi and the UPAs poor show in other parts of the country.

"There is nothing more to celebrate," he said.

As Gandhi crossed a record-breaking three lakh margin, the biggest for any candidate in Lok Sabha polls in Kerala, Congress workers took out a procession from the DCC Office Rajiv Bhavan to SKMJ High School the counting Centre.

A few of them marched to Kalpetta town holding Congress flag.

A separate group of workers of Indian Union Muslim League were seen travelling on two-wheelers waving their green flags.

A large number of Muslim League flags seen in a Rahul Gandhi roadshow after he filed his nomination from Wayanad seat had created a row with BJP president Amit Shah reportedly likening Wayanad to Pakistan.

Congress workers said they were happy that they could ensure a resounding victory for Gandhi but expressed disappointment over the dismal show of the party in other parts of the country.

"You are seeing a Rahul wave across Kerala," AICC member and former Kerala minister P K Jayalakshmi said as the counting progressed.

Congress-led UDF is leading in most of the 20 constituencies in the State.

Expressing disappointment over the poor show of the Congress-led UPA in other states, former-MLA and Congress leader K C Rosakutty Teacher alleged that the BJP-led NDA gained by manipulating all institutions including the Election Commission of India.

She said Wayanad is now a 'VVIP constituency' and the Congress chief will ensure its all round development.

DCC President I C Balakrishnan said celebrations would be organised in other towns and villages of Wayanad on the "historic victory."