It was an emotional journey, rarely seen in Assam, with scores of admirers and onlookers stopping the flower-bedecked truck at several places. 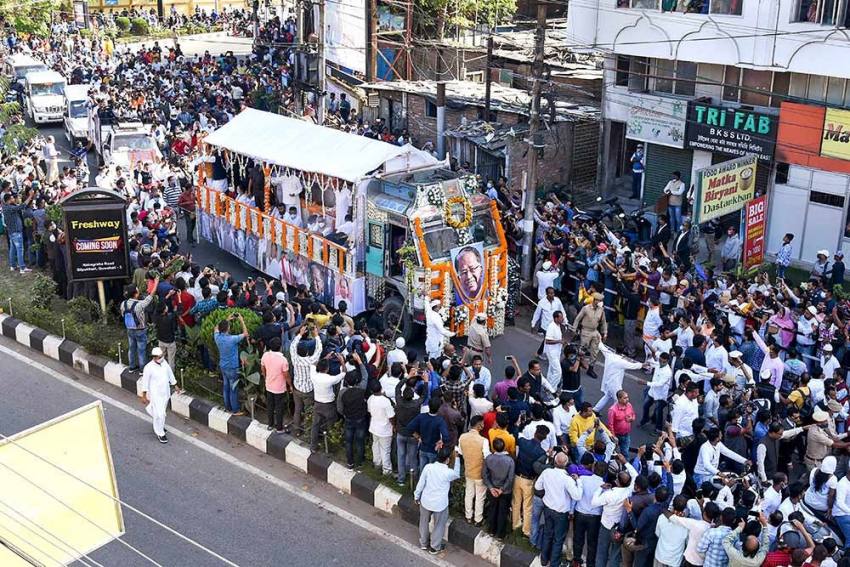 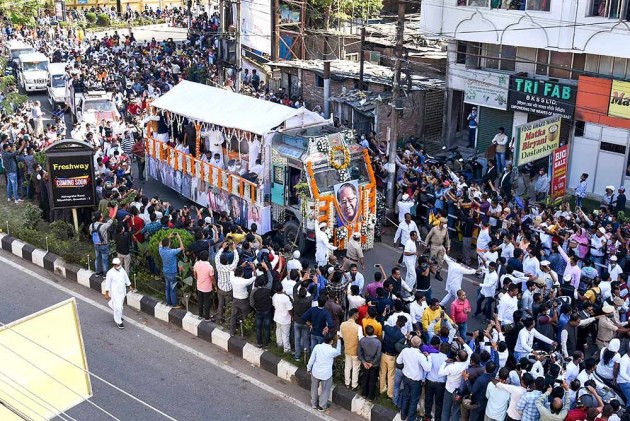 The mortal remains of former Assam chief minister Tarun Gogoi who was a "secular leader in theory and practice" were on Thursday taken to a church, namghar, mosque, temple and a Bihu function field, as per his last wish, before it was consigned to flames.

It was an emotional journey, rarely seen in Assam, with scores of admirers and onlookers stopping the flower-bedecked truck at several places, bowing their heads before the huge cut-outs of Gogoi on the vehicle, and offering floral tributes.

There was a sea of humanity everywhere with footpaths, dividers, vehicle tops and roofs of buildings occupied by men and women along the nearly 25-km-long procession route.

The crowd thickened as the day advanced.

Cutting across age groups, people were seen weeping, while hundreds were taking pictures and videos of the last journey of their beloved leader.

Traditional drums and cymbals were played, and conch shells were blown along the entire route.

Shops and commercial establishments at several places in Guwahati and other parts of the state pulled their shutters down as a mark of respect. The state government had announced a half-day holiday from 1 pm on Thursday.

The Congress stalwart died here on November 23 while undergoing treatment for post-Covid-19 complications at the age of 84 years.

"Gogoi sir was truly a secular leader in theory and practice. There are many leaders who preach secularism, but never follow it. Gogoi sir even allowed his son Gaurav to marry a Christian girl from the UK. So, he encouraged cultural assimilation also," Congress spokesperson Rhituporna Konwar said.

Earlier at 7:30 am, the former chief minister's glass coffin, wrapped in flowers, was taken out from Srimanta Sankardeva Kalakshetra, where his body was kept for the public to pay their respect, to his official residence at Dispur.

At the residence, his family members completed rituals and his wife Dolly, daughter Chandrima, daughter-in-law Elizabeth and grandchildren bid adieu to him.

Congress general secretary Jitendra Singh and many other prominent leaders paid their last respects to the departed leader at his house.

Among the pall bearers who carried his body up to the vehicle were his son Gaurav Gogoi, Congress state unit chief Ripun Bora and other leaders.

The vehicle then started moving slowly in a procession along the GS Road towards a church at Rukminigaon.

The body was not brought down from the vehicle and the Reverend Father led the huge gathering on the road itself to pray for Gogoi.

"On behalf of the Congress and the family, we express our heartfelt gratitude for the respect you have shown from the church family members. We will be ever grateful to you all," Bora said standing beside Gogoi's body.

Then it moved along the GS Road and RGB Road passing through the busy Ganeshguri market, where it had to stop several times for the crowd to pay homage, and reached the

Namghar (a place of worship for Vaishnavite followers) at Zoo-Tiniali point.

Here too, prayers were offered on the road itself.

After some time, the vehicle moved along the RGB Road further and reached Chandmari, where people in large numbers were waiting to offer their tributes.

Till Guwahati Club point, the convoy was moving at a snail's pace due to the huge crowd.

The Imam of the Burha Jame Masjid at Ambari too offered his prayer for Gogoi's eternal peace, in presence of a large crowd, on the road.

Then the mortal remains were then taken to the Ugratara temple on Lamb Road where priests offered prayers.

Due to paucity of time, the procession gave a miss to the Sukleswar temple on the bank of the Brahmaputra on the MG Road.

The convoy stopped for a few minutes at the Latasil playground, a landmark cultural spot in Guwahati where the oldest Bihu function takes place. Durga Puja is also celebrated at the same venue.

It finally reached the Nabagraha crematorium at around 2 pm after a three-and-half-hour long procession, almost three hours later than its scheduled time.

The administration had arranged 1,000 seats in the crematorium complex. Other could watch the proceedings on big LED screens installed outside.