The apex court said it has to be decided whether or not the chief minister enjoys support on the floor of House. 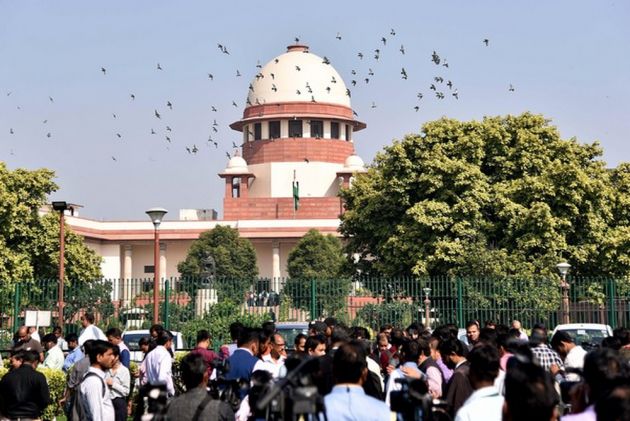 The Supreme Court on Monday said it will pass its order at 10.30 am on Tuesday on the Shiv Sena-NCP-Congress combine's plea against the Maharashtra governor's decision to swear in Devendra Fadnavis as chief minister.

The three-party combine was pressing that the floor test be ordered today itself which was opposed by Fadnavis and Deputy Chief Minister Ajit Pawar.

Maintaining that the BJP had the support of all 54 NCP MLAs to form a government in Maharashtra, the Centre asked the top court for two to three days to file a reply to the plea against the governor's decision to invite Devendra Fadnavis to become chief minister.

The Shiv Sena-Congress-NCP has filed a plea against Governor Bhagat Singh Koshiyari's decision to swear in BJP leader Fadnavis as chief minister and NCP's Ajit Pawar as deputy chief minister.

The Centre told the bench that the governor had in absolute discretion invited the largest party to form government on November 23.

Solicitor General Tushar Mehta said the Maharashtra governor is not supposed to conduct a roving and fishing inquiry to ascertain which party has numbers to form government.

The question is, he said, can a party come and seek the court's intervention to hold floor test within 24 hours.

Mehta said the governor was cognizant of the facts and the situation after poll results that had led to President's rule being invoked in the state.

The apex court, after perusing Koshiyari's letter inviting Fadnavis, said it has to be decided whether or not the chief minister enjoys support on the floor of house.

The solicitor general explained that the governor had invited Shiv Sena, BJP and NCP for government formation and President's rule was imposed only after they failed.

As the hearing began on Monday morning, Mehta submitted letters of the governor and Fadnavis as asked by the bench on Sunday.

The apex court said it is not considering the Shiv Sena-NCP-Congress' combine's plea that they be invited to form government in Maharashtra.

However, the three parties together on Monday submitted a letter to the Governor staking claim to form government.

Jyotiraditya Scindia Responds To Why He Removed Congress From Twitter Bio