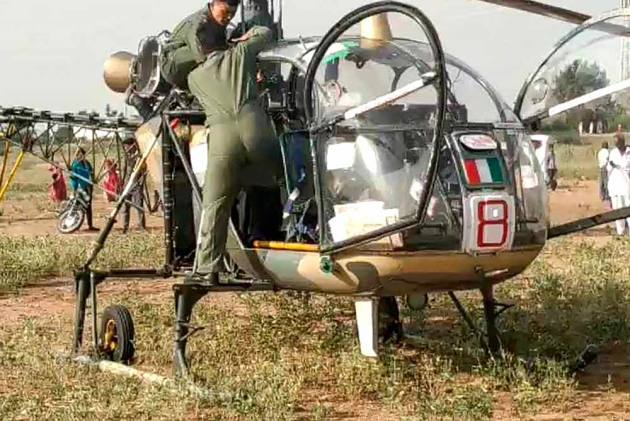 As the search operation launched in a bid  to locate the two pilots missing since a helicopter crashed into the Ranjit Sagar Dam lake in Kathua district of Jammu and Kashmir last week enters eighth day, the Indian Army is now seeking international assistance.

According to Jammu-based Army PRO, the army currently is zeroing in on a small area of 60x60 metres. Also, a special sonar equipment has flown in from Kochi in order to enable the search operations to enter their final phase.

The Army statement came after the younger brother of one of the missing pilots expressed anguish at the search and rescue operations progressing at a “snail's pace”.

“Military authorities are leaving no stone unturned to search for the helicopter which crashed and sank into the Ranjit Sagar Dam along with two pilots. The expanse of the dam is 25 km-long, 8 km-wide and more than 500 feet deep,” Lt Col Anand said.

He said the Army is coordinating the efforts of Indian Navy deep divers’ team consisting of two officers, four junior commissioned officers and 24 other ranks, Indian Army special forces divers’ team consisting of two officers, one JCO and 24 other ranks, multi beam sonars, side scanners, remotely operated vehicles and underwater manipulators which have been flown in from Chandigarh, Delhi, Mumbai and Kochi and pressed into action at the crash site.

“Search operations continue unabated inspite of bad weather and rain. Expertise and equipment of the Army, Navy, IAF, NDRF, SDRF, NGOs, state police, dam authority and private firms from all over the country have also been into action,” the army PRO said.

He said this deep underwater operation is especially challenging due to the near-zero visibility below 50 metres owing to the colloidal nature of water in this season which adversely impacts accuracy of sonars and other sensors.

“Experts, specialised equipment and divers are being continuously flown in and international assistance is also being sought. No efforts are being spared for early conclusion of the search operation,” Lt Col Anand said.

The Army Aviation Corps’ advanced light helicopter (ALH) took off from Mamun military station near Pathankot with its pilot and co-pilot and crashed into the lake during a routine sortie on August 3.

Neel Joshi, brother of Captain Jayant Joshi, the co-pilot of the helicopter, took to Twitter to express anguish over the slow pace of search and rescue operations and said “we have lost all hope at this point.”

In a series of tweets, Neel Joshi said almost one week has passed since the crash but there is no news of his brother.

“…I wish I could explain the agony of my parents. Operations to extract the wreckage are ongoing at a snail's pace with no end in sight,” he wrote on twitter.

He said the family has lost all hope at this point and the friends and family are desperate for any news of his brother.

“If the pilots are in the wreckage, then the condition of the remains after one week in the water will leave my parents in a shock no one should experience. For a second generation officer (my mother has served 40 years in the Army), the apathy of the @adgpi is astounding,” Neel Joshi said.

He said the anticipation, the wait and day after day of “futile search” by the Navy and Army is a “torture for our mother who has to wait everyday to hear any news.”