The decision to open Assam Rifles to women was taken in 2012. After a lot of research and preparation, the force was opened to women in 2015. A year later, in 2016, the first batch took its commencement oath and 127 women recruits became Assam Rifles’ first batch of Riflewomen. 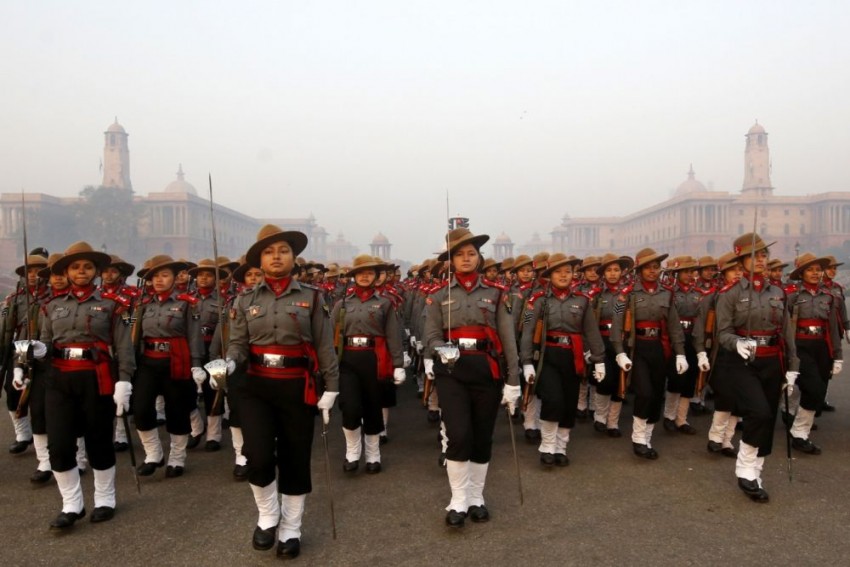 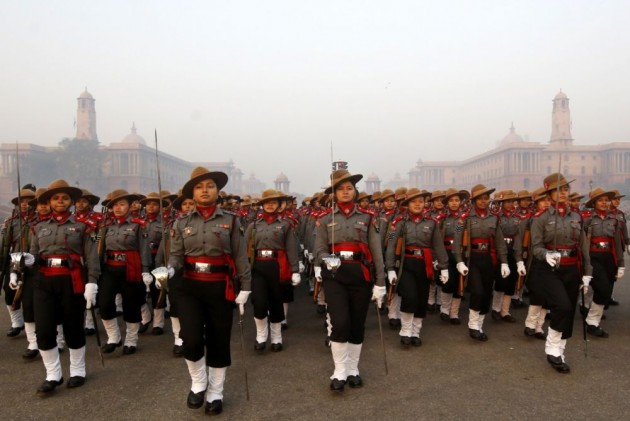 On January 26, the rhythmic marching of gleaming boots and spotless spats on 146 women soldiers of the Assam Rifles is a sign of times that women are ready to kick through any glass ceiling. These women soldiers made history not only on Rajpath – being the first all-women contingent from a central paramilitary force to participate in the Republic Day parade – but also in their area of responsibility. In Delhi, they are aiming to win the best marching contingent trophy. And in the Northeast, they are busting drug-gangs, apprehending insurgents, collecting field intelligence and performing community outreach duties at par with their male counterparts. 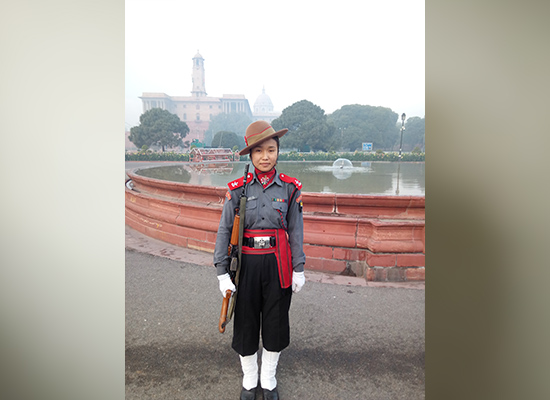 Meet M Sunila Devi, a 25-year-old, who hails from Churachandpur in Manipur. She is a deadly shot – being the best rifle-shooter among her peers – while on patrol; a pro at intelligence gathering when dealing with smugglers and terrorists. Her drill is perfect – hence her presence in the select RD marching contingent. Yet, she retains a child-like wonder when she describes her first train journey ever to Delhi for the Republic Day parade.

So, what brought her to the Assam Rifles? “It was the charm of the uniform. I was always attracted to it. I love the disciplined life I am living in the Assam Rifles,” she says. “I like guns,” she adds.

When you see her, you may not believe that this slightly-built girl led the interrogation of a woman gun-carrier. “The woman did not reveal anything when our officers questioned her. So I was called in. Since I am also from the same region, I was able to extract information from her and connect the dots which led us to the gun-factory in a remote hilly area,” she reveals. This information resulted in a big bust and several arrests. A citation has been forwarded to the headquarters commending Sunila Devi for her excellent work.

Director General of Assam Rifles, Lt Gen Sukhdeep Sangwan, Sena Medal Bar, has started the process of identifying mahila soldiers with an aptitude for intelligence gathering with an aim to create specialised all-women Field Intelligence Units. Barely a couple of years in operation, the Assam Rifles mahila soldiers have already accounted for drug seizures worth crores and arrests of several women carriers. “Our women soldiers have proved extremely helpful in intelligence gathering and manning the checkpoints on the Indo-Myanmar Border,” he adds. The Free Movement Regime (FMR) on the Indo-Myanmar border allows access up to 16km depth for people on both sides for 72 hours. Under FMR, smuggling of drugs using women carriers is rampant. In times before the Assam Rifles inducted women soldiers, it was difficult for the men soldiers to search and frisk women crossing the border. Now, however, the mahila soldiers are ensuring that this chink has been fixed. As recently as November 2018, they helped in the recovery of about Rs 30 lakh worth of WIY (World Is Yours) tablets and the arrest of a woman carrier.

The decision to open Assam Rifles to women was taken in 2012. After a lot of research and preparation, the force was opened to women in 2015. A year later, in 2016, the first batch took its commencement oath and 127 women recruits became Assam Rifles’ first batch of Riflewomen. Today, this number has gone up to about 365. Eventually, women will form five per cent of the entire force, approximately 2,500. This year, the Assam Rifles has advertised for 1,500 vacancies. Thirty-three per cent of the force consists of residents of the Northeast, the remaining include candidates from all over the country. 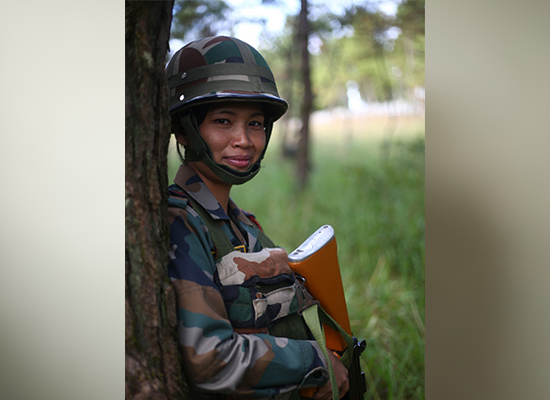 “One of the biggest challenges before inducting women troops was training them. Our instructors were not used to training women,” says Lt Gen Sangwan. They first inducted women officers from the Indian Army on deputation. The Assam Rifles, though under the Home Ministry, has Indian Army officers on deputation in the officer cadre. Among the women officers who volunteered for Assam Rifles are Maj Khushboo Kanwar from the Army Service Corps and Capt Ruchi Pathak of the Signals Corps. They are leading the Republic Day marching contingent. 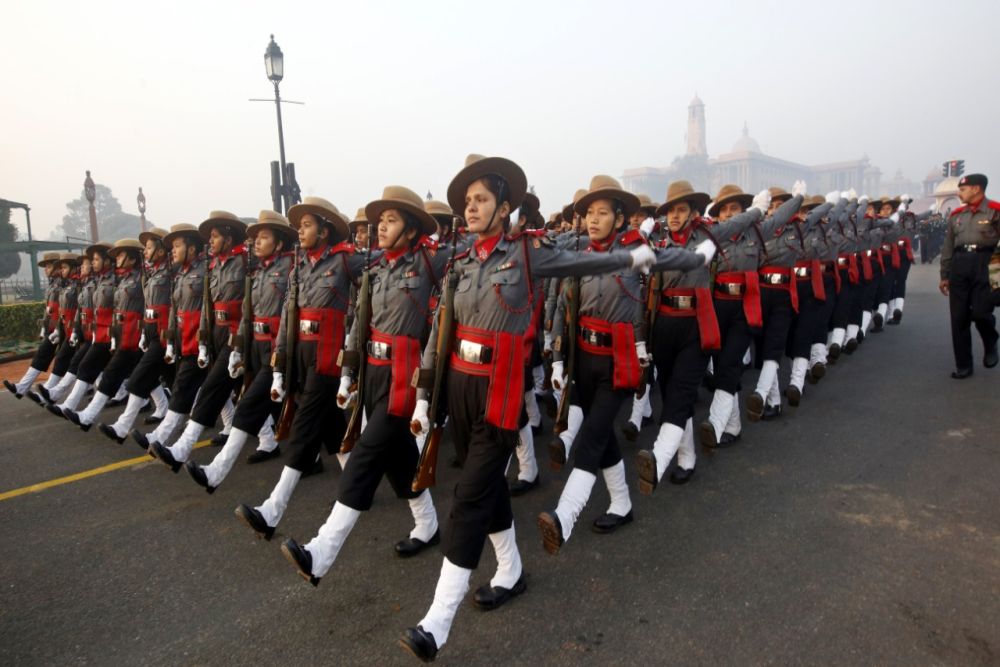 The Assam Rifles Training Centre and School (ARTC&S) at Shokhuvi in Nagaland, which had till 2015, trained only male recruits, had to be prepared to train women. A core group of senior officers visited training establishments of the various police forces to understand the logistical requirements. The barracks for the women were secured and facilities like incinerators for sanitary waste as well as a hair salon were provided.

“By the time the second batch of recruits was inducted, we also retained some of the women from the first batch as instructors. They are called Badi Didi (Elder Sister) and assist the male instructors,” informs Lt Gen Sangwan. 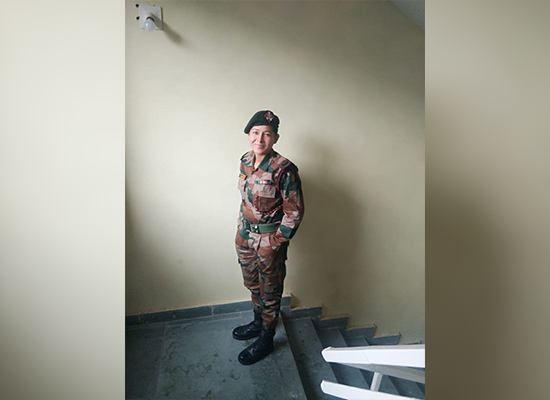 For Sunita Thapa from Senapati, Manipur, being part of the contingent is more than a uniform or a job. Her husband, Kumar Thapa was also with the Assam Rifles. He died in 2014. Sunita was 22 at that time and had an infant son. She was among the first women recruits and today, his son Rickson who will turn five, sends her off to work with a salute. “For me, working in the Assam Rifles is a way of living the life my husband had dreamt of. Today, I am here, marching in front of the President of India. The entire nation will watch me. This opportunity has given me a means of taking forward my husband’s legacy,” she says. 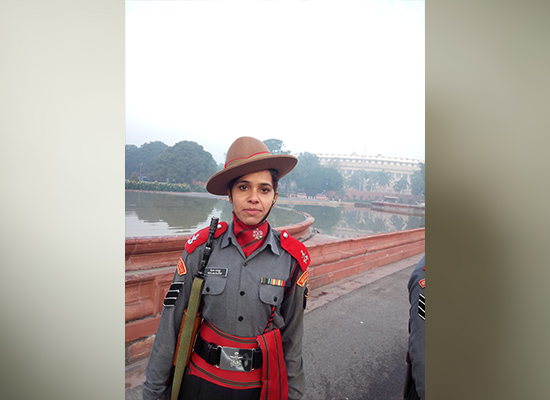 If Sunita was inspired by her husband, Neelam Rajput from Guna, grew up hearing war stories by her grandfather who was in the Special Forces of the Indian Army. “As a child, I would always look forward to spending time with my grandfather and listening to his stories. When I saw the recruitment form, I did not think twice before filling it out,” she says. For her, life in the Assam Rifles has been tough, but she finds herself fit and disciplined now. “When we go for long patrols, we carry 30 kg backpacks and weapons for as long as 72 hours at a stretch,” she says. The physical fitness requirements for mahila soldiers is the same as that of the women in the Indian Army, which is higher than the requirement for other police forces. 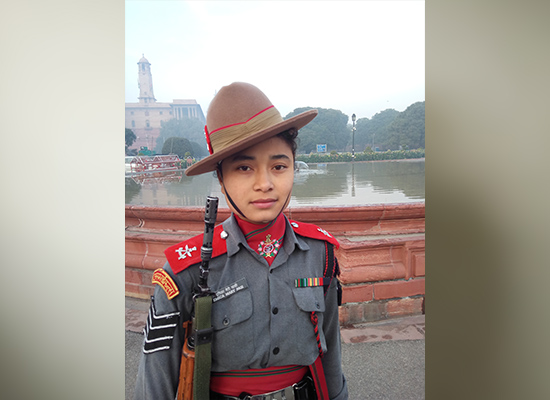 Emica Mary Pasi is 22-year-old and for her Assam Rifles has proved lucky at the fifth attempt. “I am from Shillong and had come to the NCC Republic Day Camp four times. Every time I would hope to make it to Rajpath, but was always left out because of my height. But now, I am finally in the RD contingent,” she says with a big smile.

Killing it with a smile 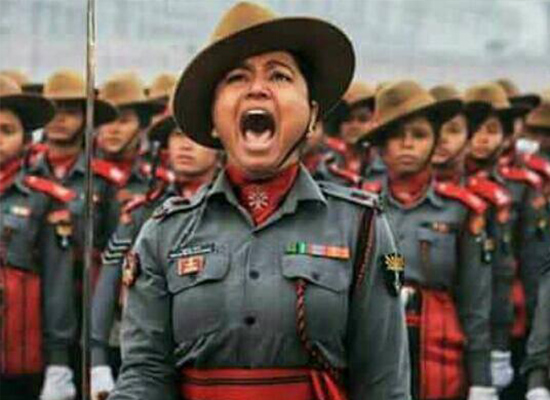 Smiles are abundant among the 146-strong contingent that has come to Delhi for the R-Day parade. Smiles that hide the fact that they wake up at 2.30 am every day and hold drill for more than 6 hours to perfect that synchronised marching. Maj Khushboo runs a tight ship as she leads the women from the Lushai Company of the Assam Rifles down Rajpath. Her inspiration is Angel, her toddler, who eagerly waits for her mother to return home every day. “I am from the ASC. When the Army asked for volunteers to move to Assam Rifles on deputation, I signed up as it is a lifetime opportunity. The josh (enthusiasm) is always high here,” she says. 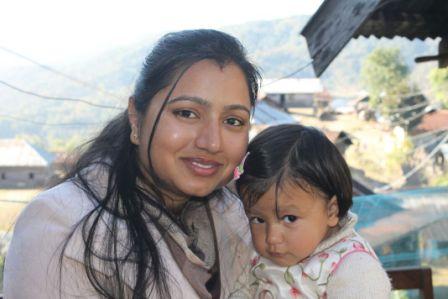 Major Khushbo with her daughter Angel | Photo by: Assam Rifles

And why shouldn't it be. After all, how many women can put on their CV that they can assemble a weapon with blindfolds on in under 60 seconds?

The Commandant of the ARTC&S, Brig Segan, admits, “While all the riflewomen are at par with their male counterparts, some are actually better than men with the same level of training.”

So proud is their cadre of their performance that last year on Infantry Day, the DGAR took two riflewomen as wreath bearers for the ceremony at India Gate.

As these bright young women who will march down Rajpath on January 26, carry with them big dreams. “We are looking at creating an officer cadre from among them. In the years to come, we will be offering them commissions,” says Lt Gen Sangwan. Already, the process of identifying riflewomen with potential has started.

Soni Sangwan is a senior journalist