'The session of the assembly will take place soon. The majority is with us, all Congress MLAs are united,' Ashok Gehlot said. 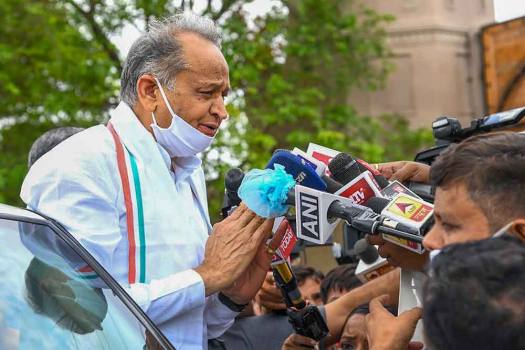 Rajasthan Chief Minister Ashok Gehlot on Thursday said an assembly session will be called soon and his government will prove its majority.

“The session of the assembly will take place soon. The majority is with us, all Congress MLAs are united,” Gehlot told reporters.

He hoped that some of the dissident MLAs, who are led by sacked deputy chief minister Sachin Pilot, will also attend the session when it is called “very soon”.

“Without them too, we have a full majority and will go to the House on the basis of this majority, and we will prove it,” he said.

The indication that the Gehlot government is preparing for a floor test in the assembly comes day ahead of the expected pronouncement of a high court order on the disqualification notices sent by the Speaker to the rebel MLAs.

But any Rajasthan High Court order will be subject to the outcome of a petition by the Rajasthan Speaker that the Supreme Court is now hearing.

The 19 dissident MLAs had filed a petition in the high court, challenging the disqualification notices.

Gehlot said those who went to court are the ones who were wrong and had been misguided.

“They are calling us and saying that they are unable to come out,” he said, hinting at reports that the rebel MLAs are camping together, just like the ones in his camp. “Bouncers are deployed,” he alleged.

“I hope that some of them, when they come out, will vote with us,” the chief minister said, adding that his government is in majority even without their support.

Gehlot said the coronavirus pandemic and political issues will be discussed in the assembly session.

Targeting Union Minister Gajendra Singh Shekhawat, the chief minister said the audio clips which indicate an alleged plot to topple his government can be sent abroad for forensic tests.

Without taking the minister’s name, Gehlot questioned why he is not coming forward to give a voice sample.

Rejecting the charge that the audio clips are fabricated, he said they can be sent to any forensic science laboratory for examination.

“We can send it for FSL testing to America if they have no trust in the Rajasthan government, he said, adding that the Congress also did not trust the Centre.

“Why is he not giving a voice test? He should come forward for it,” the chief minister said, in an apparent reference to Gehlot whom the party has accused of trying to lure Congress MLAs.

Shekhawat has denied the charge that it his voice on tape.