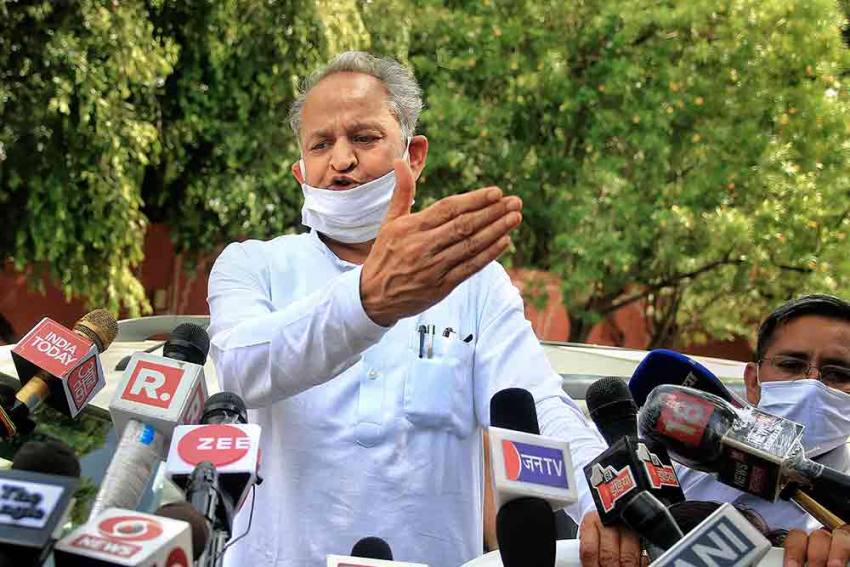 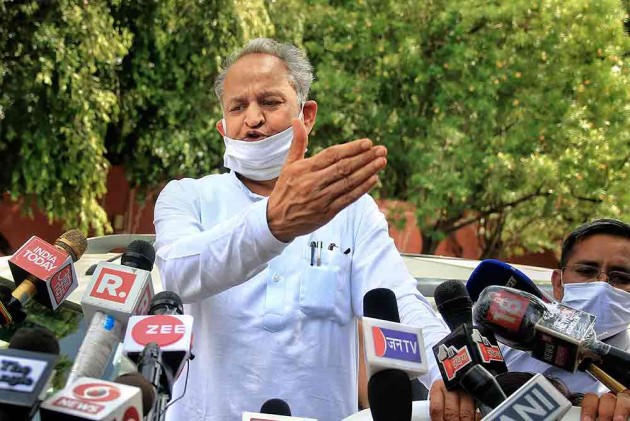 The transcripts of conversations mentioned in the two FIRs lodged by the special operation group (SOG) of Rajasthan police on Friday present a picture wherein individuals are allegedly conspiring to topple the Congress government in Rajasthan and openly using words such as '30 MLAs', 'Sachin Ji' and 'people in Delhi who have received the first instalment'.

In both FIRs, the accused have been listed as 'unknown'. However, one of the FIRs mention three people -- Bhanwar Lal Sharma, Gajendra Singh and Sanjay Jain.

The SOG on Friday arrested Jain following interrogation into the FIR lodged on the basis of audio recording, ADG Rathore said.

The audio clips, which the party claimed was being circulated in social media groups, were shared by the Ashok Gehlot camp on Thursday night. The FIRs have people speaking in three languages-English, Hindi and Rajasthani.

Outlook cannot independently verify the veracity of the audio clips.

In the first FIR, the transcripts of the alleged conversations in Hindi and Rajasthani languages are allegedly taking place between Sanjay Jain, Congress MLA Bhanwarlal Sharma and Gajendra Singh. "30, this number will be complete within 2-3 days, If possible today, arrange a conversation with Gajendra ji". "Yes, this is Gajendra Singh speaking Maharaj", is the transcription of the conversation mentioned in the FIR lodged under sections 124A and 120B IPC against the unknown accused.

Despite the accused being listed as unknown, this FIR mentions the name of Congress MLA Bhanwarlal Sharma, Sanjay Jain and Gajendra Singh and says that the audio clip is an alleged conversation between the three.

Congress spokesperson Randeep Singh Surjewala in a press conference on Friday morning had accused Union minister Gajendra Singh Shekhawat along with rebel Congress MLA Bhanwar Lal Sharma of conspiring to pull down its government in Rajasthan.

While the FIR mentions the full name of Sharma with his designation, it doesn't give any details of Gajendra Singh. It was Surjewala and Congress leaders who said this was the Union minister Gajendra Singh Shekhawat. The Congress chief whip, on whose complaint the FIR was registered, is on record saying that they 'suspect' it is Shekhawat they heard in the tapes but can't be sure and that is why the SOG must probe and find out if the Gajendra Singh heard in the tapes is actually the Union minister or not.

Sharma, along with another Pilot loyalist Congress legislator Vishvendra Singh were suspended from the primary membership of the Congress on Friday, as the party cited purported audio clips as proof that they were involved in some kind of deal-making.

"So he is saying that those people who are with us in Delhi have taken the money and the first installment has reached," one of the voices is heard saying.

Clip B says "You are sticking with them, Right?"

Moreover, according to the transcription of the audio mentioned in the FIR, further, Clip B enquires from clip A that, "Has Chandna not called back", to which A replies by saying "NO". Ashok Chandna is Congress MLA from Hindoli and a known Gehlot loyalist. However, his name does not figure in any way in the FIR. The second FIR too is registered against unknown 'accused'.

Interestingly, despite the Congress levelling allegations against Vishvendra Singh and suspending him, the FIR does not name him.

Meanwhile, a team from the SOG reached Manesar in Haryana on Friday afternoon to investigate MLAs from the Pilot camp.

Refuting the allegations, MLA Bhanwarlal Sharma denied that it's his voice in the audio and called it fake and an attempt to malign him. Similarly, union minister Gajendra Singh Shekhawat has told reporters in Delhi that it is not his voice on the tapes, and he is ready to face any investigation.

Reacting to the allegations, Rajasthan BJP chief Satish Poonia termed the allegations as 'baseless' and called the audio tapes fake. He said the house of Congress party is in complete disorder due to their internal fights. "This is the congress party's tactic of creating confusion among the public", Poonia told reporters.